A year after the Gaza war, Israeli media is publishing testimonies about the Shajaiya battles, which are considered the fiercest. 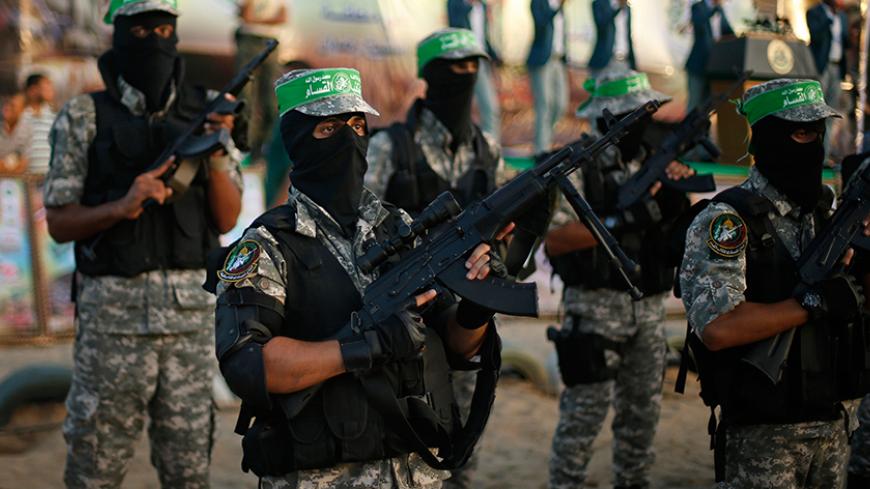 Hamas militants march during a rally in memory of people who were killed during a seven-week Israeli offensive, in Gaza City, Sept. 26, 2014. - REUTERS/Suhaib Salem

Marking the first anniversary of the Gaza war in 2014, Al-Monitor made a number of field trips to the Shajaiya neighborhood, in the eastern part of Gaza City. Shajaiya is the largest neighborhood in Gaza with 100,000 residents, and it enjoys military importance, as El Montar — a hill rising 85 meters (279 feet) above sea level — is located there. During the Palestinian intifadas, the area was the scene of confrontations between Palestinians and Israelis, and it was the target of Israeli air raids during the wars in 2008, 2012 and 2014.

Israeli stories have been emerging about the daily fighting that took place in Shajaiya last summer. Israeli Col. Ghassan Alian recently published as part of a book one such story about the strikes his soldiers endured when they entered Shajaiya during the war in 2014.

Israeli newspaper Maariv published on July 19 interviews with Israeli generals who talked about how fierce the Shajaiya battles were.

On April 29, Israeli Channel 2 talked about the Shajaiya battles, saying they changed the face of the war and became a symbol for Hamas fighters. The channel aired harsh testimonies of soldiers who had participated in this battle. Israeli Channel 10 reported on April 5 on an investigation of an incident that took place on July 20, 2014, in which Hamas destroyed a personnel carrier in Shajaiya, resulting in the death of seven Israeli soldiers.

These are only a few examples of dozens of testimonies published recently by Israeli media about the Shajaiya battles. The testimonies convey the heavy losses sustained by both sides in the violent clashes between Israeli soldiers and fighters from Izz ad-Din al-Qassam Brigades, Hamas' military wing. However, the battles stopped Israel from advancing farther into Gaza.

A Hamas fighter who participated in the Shajaiya battles told Al-Monitor on condition of anonymity, “Al-Qassam Brigades were fighting ... according to a pre-planned offensive and defensive strategy. They were expecting the Israeli ground intervention and were not surprised by it, which is why the battles proceeded according to the Palestinian fighters’ expectations.”

He added, “Our instructions to the Shajaiya fighters were clear: Only shoot the ground troops. Despite intensive shelling by the Israeli army during the battles, our fighters resisted and stuck to the instructions. Following the violent artillery shelling, Israeli [military] vehicles entered the outskirts of Shajaiya, as [Israel] thought the fighters had fled the war and the neighborhood was empty. The Israeli soldiers got out of their vehicles full of confidence. This is when we targeted them.”

The Shajaiya battle is considered the fiercest that took place between Hamas and the Israelis, as the Israeli air force staged unprecedented air raids July 20 leading to hundreds of Palestinian victims. The air raids came in response to the Israeli casualties.

The next day, Gaza's Al-Resalah newspaper cited Israeli admissions that the Shajaiya battle was considered the most violent the Israeli army had ever faced, and that it would have a major impact on the army’s morale in the future. Hamas fought brutally and was able to surround the Israeli forces on more than one occasion, despite the intense Israeli air raids. The raids did not stop the Hamas fighters, but rather it strengthened them.

On March 31, the commander of the 55th Artillery Brigade of the Israeli Armored Corps, Lt. Col. Gadi Dror, estimated that the Shajaiya battles were eight times more violent than the famous Bint Jbeil battle during the Second Lebanon War in July 2006. In fact, he compared it to the 1973 Arab-Israeli War.

The official website of al-Qassam Brigades posted in July 2014 a video showing the damages done to some Israeli military vehicles that had breached the eastern border of Shajaiya. These vehicles were destroyed by Hamas fighters.

Influential Hamas sources told Al-Monitor on condition of anonymity, “The movement is holding periodical conferences for its cadres, during which it presents the testimonies of the fighters who participated in the Shajaiya battle. [Hamas] then conveys these experiences to the Palestinians on the streets, in a bid to confirm its victory in the Gaza war, despite the human losses Palestinians suffered due to the Israeli massacres.”

A fighter from al-Qassam Brigades’ engineering corps told Al-Monitor on the condition his full name be withheld, “One day, as the Israeli [army] was invading the Shajaiya neighborhood, one of al-Qassam’s engineers [suggested] planting and detonating an explosive device after he saw, from a wall he was standing on, a tank advancing toward eastern Shajaiya. He was able to easily plant the explosives according to engineering standards, as the tunnels [used by al-Qassam Brigades] helped him move easily from one place to another.”

He added, “We were able to target many advancing Israeli vehicles with Kornet rockets, Tandem missiles and shrapnel bombs, and all types of anti-armor and anti-personnel rockets.”

On Aug. 2, 2014, al-Qassam Brigades revealed details of the fighting against the Israeli army in eastern Shajaiya, when more than 30 Israeli soldiers were killed. The brigades, however, did not reveal the number of its victims.

After more than a year since the end of the Gaza war, the Shajaiya battles are still fresh in the minds of Hamas fighters, as they consider them a turning point in the history of confrontations against the Israeli army. The fighters are now more convinced that in any future war the Shajaiya experience will repeat itself in all of Gaza’s regions, and that Israel will face major losses. Hamas considers that this alone can be a sufficient deterrent for another ground invasion of the Gaza Strip.