Who won Gaza's Shajaiya battle? Depends on whom you ask

Hamas activists keep proclaiming victory by presenting the Shajaiya battle as a deterrent against a future Israeli ground invasion, ignoring the Israeli decision not to take over Gaza and the tremendous destruction suffered by Gaza residents following that battle. 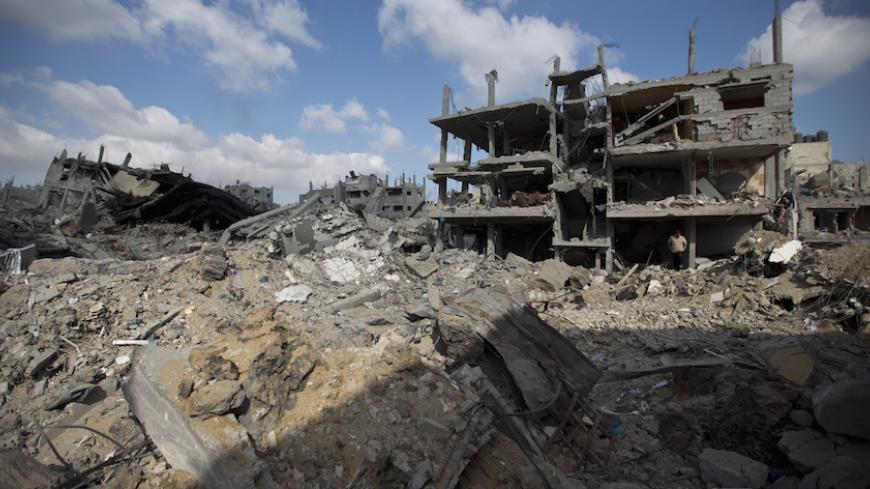 A view of the rubble of destroyed buildings and homes in the Shajaiya residential district of Gaza City on July 26, 2014. - MAHMUD HAMS/AFP/Getty Images

Both Israel and Gaza are marking the first anniversary of Operation Protective Edge that took place between July 7 and Aug. 26, 2014. Family and friends of Lt. Hadar Goldin, among them distant relative Defense Minister Moshe Ya’alon, arrived at the military cemetery in Kfar Sava to visit the gravestone for Goldin, whose body is being held by Hamas. Standing by the cenotaph erected in his son’s memory, Goldin’s father said, “I remind you that the IDF left two bodies behind in Gaza and Rafah [Hadar Goldin and Oron Shaul]. In the name of the sacred covenant between the parents and the state, I pledge that we will return his body [home].”

Another ceremony was held on Aug. 12 at the Western Wall, where 75 Torah scrolls, some of which survived the Holocaust, were dedicated in memory of the fallen — soldiers, Israeli civilians and foreign workers — during the operation. Jews from the Diaspora donated the scrolls. For its part, the Israeli media also did its own reflection concerning the lessons, misguided assessments, the Hamas tunnels and even the spikes in real-estate prices and tourism [after the Gaza war].

In Gaza, the picture is complex and difficult. There, too, the residents were marking the first anniversary of the operation during which more than 2,000 Palestinians were killed, according to assessments (other assessments evaluate 2,400 casualties). Tens of thousands were wounded. Houses and buildings sustained unprecedented damage that is yet to be repaired. Thousands of Palestinians, mainly in the Shajaiya Gaza neighborhood and the Gaza Strip communities near the Israeli border, remain homeless.

Adnan Abu Amer, an Al-Monitor contributor in Gaza, traveled to Shajaiya. His impressions from the neighborhood one year after the operation were published in Al-Monitor on Aug. 13. “The fighters of [Izz ad-Din al-Qassam Brigades] are now more convinced that in any future war the Shajaiya experience will repeat itself in all of Gaza’s regions, and that Israel will face major losses,” Abu Amer wrote after interviewing Hamas fighters and praising their heroism for what they claim was their ability to stop IDF forces from moving deep into the Gaza Strip. Strangely though, Abu Amer did not see — or saw and chose to ignore — the great devastation in the neighborhood that is still licking its wounds. According to Palestinian accounts, hundreds of people were killed in that neighborhood. The Palestinian Ministry of Health reported that some 421 residents were killed around Gaza City and its environs, most of whom from Shajaiya.

The battle in Shajaiya began on July 20 in the wake of several attempts to broker a cease-fire. The incursion of the IDF Golani Brigade began following a decision by Israel’s political establishment to expand the operation in order to destroy Hamas’ tunnels. On the first day of the battle, an IDF personnel carrier took a direct hit from Hamas fire and six soldiers were killed. One of them, Oron Shaul, was announced missing in action; his body is being held by Hamas. In the three-day battle, 16 Golani Brigade soldiers were killed and about 40 were wounded.

Without a doubt, the fighting in Shajaiya was the hardest-fought battle that the IDF conducted during the operation in the Gaza Strip. More than 100,000 people are cramped together inside a densely populated neighborhood east of Gaza. For years, Hamas militants dug tunnels and weapons caches underneath the residents’ homes, turning the neighborhood into a military compound.

Did the residents of Shajaiya give the al-Qassam Brigades their consent to dig tunnels underneath their homes, thus turning them into targets? Abu Amer did not ask a single resident of this devastated neighborhood whether, in retrospect, the fighters of al-Qassam are worthy of the glory and heroism of which they pride themselves. Nor did he ask the fighters who bragged about their heroism if they had any regrets that, as a result of their actions, so many people paid with their lives and property. How can you talk about heroism when the results of the war in Gaza speak for themselves?

It was already on the first day of the fighting in Shajaiya that the Palestinians reported having sustained dozens of fatalities and hundreds of casualties. Palestinian Authority President Mahmoud Abbas even declared a three-day mourning period for what he called a “massacre.” Even today, the photos of the yet-to-be-rehabilitated neighborhood are distressing — incomprehensible devastation of entire quarters that were razed to the ground in a bid to unearth the explosive tunnels. But for some reason, in Abu Amer’s article, the tables were turned. The fighters of Hamas’ military wing portray the fighting in Shajaiya as the battle to defend Gaza, boasting that their heroism prevented the fall of the Gaza Strip into Israeli hands.

In his article, Abu Amer demonstrated great knowledge about the engrossment of the Israeli media with Shajaiya, maybe in order to show his skeptical readers that even the Israelis admit that it was a fierce battle. For whatever reason, the writer did not pay attention, however, to the fact that a bitter political debate took place between supporters of Prime Minister Benjamin Netanyahu and the defense establishment and their critics, who rejected out of hand the idea of conquering Gaza and toppling the Hamas regime. Conquering Gaza was not even on the agenda, and the battle in Shajaiya was not a defensive battle. If the IDF had been given the order to conquer the Gaza Strip, the al-Qassam fighters, hunkering down in the tunnels and inside the residents’ homes, would not have been an obstacle.

What is most upsetting in the bravado of the al-Qassam fighters is the fact that they take absolutely no responsibility for the results. If Hamas’ objective was to lift the blockade Israel imposed on the Gaza Strip eight years ago, it has failed to accomplish it. The Gaza Strip, in the aftermath of Hamas’ military adventure, has become a more difficult place to live. For years, I heard countless stories in the Gaza Strip by al-Qassam fighters and militants from other organizations fantasizing how they can “drive out the Zionist enemy, strike fear in it and even make the ground burn under its feet.” To be more precise, even some Hamas leaders foster similar delusions or delude their listeners in the speeches they make.

Sometimes those statements are said out of blind religious fervor, but mostly they are said to boost the morale of the residents and the fighters of the movement, which — after seizing power by force in Gaza in 2007 — has spelled only distress for the people. Given the calamitous results of the war, the movement’s leaders in general and the al-Qassam fighters in particular should have done some soul-searching and stopped lying to themselves and their own people. When all is said and done, the Hamas movement did not score as much as a single victory last summer.

Two weeks ago, as part of preparations for the upcoming school year, UNRWA [United Nations Relief and Works Agency for Palestine Refugees in the Near East] took out of its facilities — sometimes by force — hundreds of families who lost their homes in the Shajaiya neighborhood a year ago and found shelter there. Journalists in Gaza who spoke to the people who had evacuated and to other neighborhood residents told Al-Monitor on condition of anonymity that they heard from them sharp criticism toward Israel for its alleged excessive use of force during the Gaza war. But those same people, said the journalists, also sharply criticized Hamas militants. They claimed that the militants turned them into human shields at first (during the war), and after the war preferred to build new tunnels instead of helping the residents rebuild their homes.

Adnan Abu Amer, who visited the neighborhood a year after Operation Protective Edge, did not even mention in his article the fact that those Shajaiya homeless people set up tents near their destroyed houses, where they have lived ever since, praying for help. It would be interesting to know what they think when they hear armed militants promise that the battle in their neighborhood could become a model for future battles. Reacting to the “victors,” they would probably call it a Pyrrhic victory. ​