A guide circulated among al-Qassam fighters outlines how to make the best use of their limited, tactical options in confronting the Israeli ground operation. 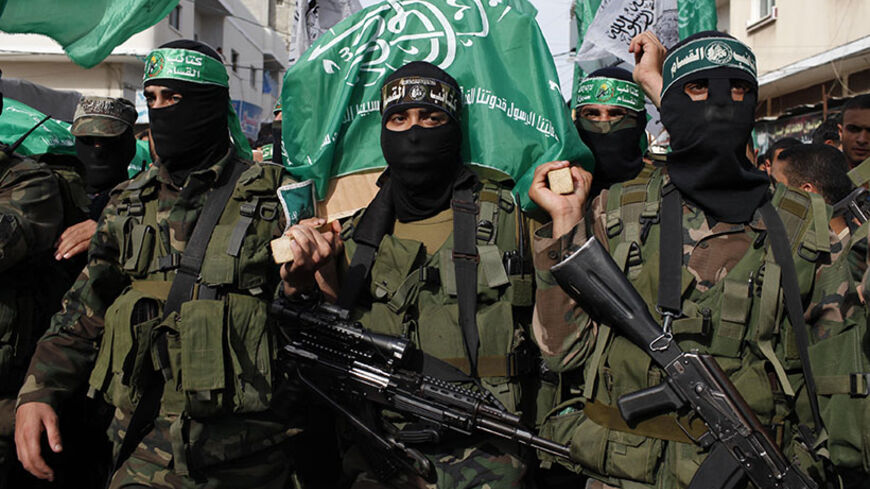 GAZA CITY, Gaza Strip — Hamas announced in the evening of July 20 the kidnapping of Israeli soldier Shaul Aron during a clash that took place at dawn the same day. The clash occurred with Israeli forces in the al-Tuffah neighborhood in eastern Gaza on the second day of the ground operation. A spokesman for the Izz ad-Din al-Qassam Brigades, Abu Obaida, gave the service number of the kidnapped soldier, 6092065, and that he was from the elite Israeli Golani Brigade. Israel initially denied that Hamas kidnapped the soldier, and later claimed that the soldier had been killed.

A Hamas media official refused to comment on Israel’s claim that the soldier had died during an interview with Al-Monitor, saying, "This is the responsibility of al-Qassam Brigades and no one else's. Israel's promotion of this news is for the purpose of making Hamas confirm or deny its accuracy. This is how Israel is trying to gain free information without having to liberate Palestinian detainees in return for information regarding the fate of the soldier who was seized by al-Qassam."

The official, speaking on condition of anonymity, said, “It is difficult to link the kidnapping of the soldier to the terms of the current truce; otherwise, the confrontation would last longer. Thus, the parties will agree on postponing the subject of the captured soldier until after this crazy war has ended.”

Palestinians had expected that the Israeli aggression that started on July 8 would degenerate into a ground operation, despite the efforts to prevent the situation from getting to this phase.

Hamas field officers in Gaza told Al-Monitor that they believe the Sufa operation carried out July 17, in which 13 Palestinian armed fighters attempted to enter Israel through a tunnel, “pushed [Israeli Prime Minister Benjamin] Netanyahu to make the ground operation decision.”

Palestinian military expert and retired Brig. Gen. Wassef Erekat told the Hamas-affiliated Al-Resalah newspaper in Gaza that Israel’s careful consideration of the ground operation was due to its awareness of the potential losses to be incurred by the army and its fear of the surprises lying in store for it, such as ambushes and kidnappings, as well as Gaza’s geography and population density. He said the resistance in Gaza was effective at street fighting, hiding and making quick strikes against its opponents.

Al-Monitor saw a training booklet traded among al-Qassam fighters before the outbreak of the war that displayed confidence in fighting Israeli troops on the ground.

The booklet read, “Amid the military power imbalance favoring Israel, the resistance will heavily use anti-tank guided missiles while relying on qualitative capabilities to respond to the ground operation."

It went on, “The Israeli soldiers will primarily target tunnels, as these give fighters easy mobility and allow them to set up ambushes. The most heard phrase among the invading soldiers is ‘Careful! There is a hole under your foot!’ As they approach residential areas, al-Qassam sniper units will emerge and the army will face hundreds of improvised and camouflaged bombs in each lane and road.

“The more it advances into the residential areas of Gaza, the more Hamas fighters will be favored; it is on their land that the clashes are taking place, which allows them to easily monitor the vehicles of the Israeli army.”

Egyptian military expert Brig. Gen. Safwat al-Zayat told Al Jazeera that the Israeli military is trying to create a safe area on the outskirts of Gaza for fear of Hamas’ anti-tank missiles.

For their part, al-Qassam Brigades announced that they have carried out field operations aimed at disrupting Israel's ground movement into Gaza. The most recent operation was carried out at dawn on July 20, when they lured an Israeli force trying to advance east of al-Tuffah neighborhood in Gaza City into a tight ambush. Al-Qassam Brigades fighters allowed the tanks to enter a minefield of barrel explosives, and after two personnel carriers followed them into the ambush, the fighters blew up the minefield, destroying it completely. Hamas claimed the operation resulted in the killing of 14 Israeli soldiers. The total number of slain Israeli soldiers has reached 25, according to the Israel Defense Forces (IDF). The exact number of al-Qassam Brigades casualties remain unknown, but estimates obtained by Al-Monitor from informed circles in Hamas say around 50 fighters have been killed and 100 others wounded since the Israeli operation began July 8.

Al-Qassam Brigades said that at dawn on July 18, its fighters managed to infiltrate the Israeli army positions east of Rafah and Khan Yunis in the southern Gaza Strip. Al-Qassam Brigades claimed its fighters managed to enter those areas, using a tunnel behind Israeli positions, to explore places where ground forces were concentrated and to sabotage intelligence systems that the IDF had recently erected to monitor the Rafah border. Al-Qassam Brigades claimed six Israeli soldiers were killed in the operation, while Israel said two had been killed.

Earlier on July 19, Al-Monitor’s correspondent, along with the residents of the central area of ​​Gaza, experienced an intense struggle between Palestinian fighters and the Israeli forces, and later learned from al-Qassam Brigades that they had infiltrated behind enemy lines in the vicinity and engaged in heavy clashes.

At a later stage, the Israeli forces reported the killing of an officer and the wounding of five others during this operation. The IDF announced on the evening of July 20 that 18 soldiers from the Golani infantry brigade were killed in the ongoing fighting in the Shajaiya neighborhood in Gaza City, with 150 wounded soldiers being treated in various hospitals, seven of whom were in serious condition.

At dawn on July 20, the Israeli forces carried out a terrible massacre in the Shajaiya neighborhood that resulted in the deaths of more than 70 Palestinians and wounding of 400 others by Israeli artillery.

A Hamas military source in Gaza told Al-Monitor, “The Israeli forces are facing stiff resistance on the part of Hamas fighters, who are holed up in border sites set in advance as per a plan designed to surprise the Israelis in defensive and offensive operations and make them incur losses in a war of attrition that the Israeli public finds it difficult to tolerate.” Al-Monitor previously reported on al-Qassam Brigades’ adoption of “Mourabitoun units” to confront ground invasions.

A freed prisoner from the West Bank who was deported to the Gaza Strip told Al-Monitor, “Al-Qassam [fighters] are responding to the ground campaign, benefiting from the combat experience that they acquired in the West Bank during Operation Defensive Shield in 2002. They are actually following a professional tactic to face incursions, whereby they set ambushes for the army by opening holes in the houses located on the outskirts of Gaza's border, so that they can ambush the soldiers inside the houses and catch them off guard. There is also an innovative way that consists of booby-trapping water faucets and pipes and detonating them at the level of the head of the Israeli soldier.”

The freed prisoner, a former Hamas activist in the West Bank who refused to reveal his identity, concluded by saying, “The routes taken by the tanks are known in the areas of Abasan and Bani Suhaila in Khan Yunis, Bureij, Maghazi and Johr el-Dik in the central region, Shojae'ya province in Gaza and Beit Hanoun and Beit Lahia in the northern Gaza Strip. These are narrow areas with limited crossings and driveways, which allows the resistance to take advantage of this field factor and develop a plan to address the land incursion by setting up booby-trapped entrances, planting improvised explosive devices and disseminating resistance fighters carrying RPG rockets to impede the progress of the vehicles and confine them within the improvised explosive devices field."