After Israel targeted and killed several of Hamas' military leaders, the organization has grown more concerned about Israel succeeding in breaching the movement’s secret communications system. 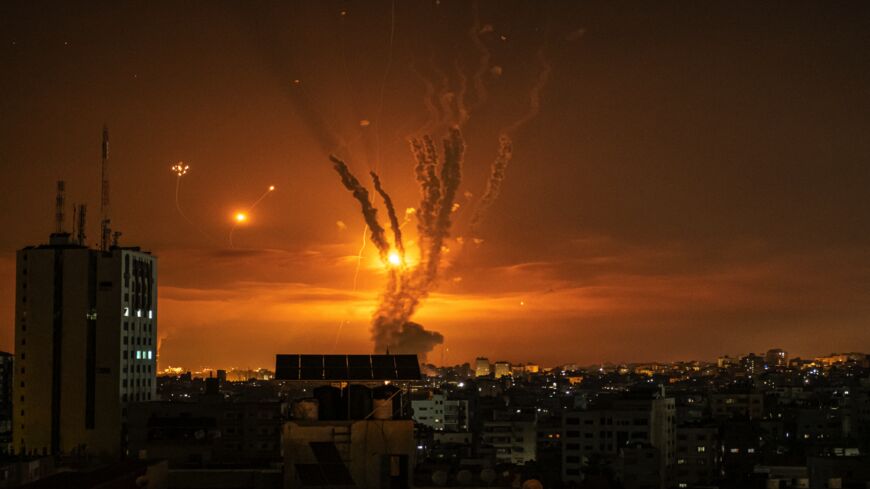 Rockets launched toward Israel from the northern Gaza Strip and response from the Israeli missile defense system known as the Iron Dome leave streaks through the sky on May 14, 2021, in Gaza City, Gaza. - Fatima Shbair/Getty Images

Hamas was deeply shocked after a number of its military leaders were killed in an Israeli airstrike targeting them on May 12, and it fears that Israel has spies who have uncovered Hamas' secret communications system.

The targeting was part of the Israeli military operation in the Gaza Strip after resistance factions fired hundreds of rockets toward Israel on May 10, in response to the Israeli police storming Al-Aqsa Mosque and the attempts to evict residents of the Sheikh Jarrah neighborhood in Jerusalem.

As of May 14, the death toll in Gaza was at least 122, including 31 children and 20 women. Additionally, some 900 were wounded, some of whom are in critical condition.

The Israeli army announced on May 12 that it had killed 16 Hamas military leaders and members. Izz ad-Din al-Qassam Brigades, the movement’s military wing, admitted in a statement on May 12 that some of its leaders had been killed, namely, “Bassem Issa, the commander of the Gaza City Brigade, and several other leaders and mujahideen who died during the occupation’s aggression against the resistance’s sites and hideouts.”

Ismail Haniyeh, head of Hamas’ political bureau, commented on the military leaders’ death in a statement on May 13, saying, “This has become an open confrontation with the enemy, and we will continue to defend our people in Gaza. Whenever a leader dies, a long line of leaders will carry the torch and continue the path toward victory, liberation and return."

In an interview with Al-Aqsa TV on May 13, Saleh al-Arouri, deputy head of Hamas’ political bureau, said, “The occupation should not dare think that the martyrdom of leaders can weaken us; the resistance is ongoing and ever-growing.”

A reliable source in al-Qassam Brigades told Al-Monitor that these Hamas leaders were targeted while they were inside a secret tunnel the movement had dug under Al-Thalathini Street in central Gaza City, one of the most high-end streets in the city.

The source stated that al-Qassam Brigades had already started an investigation on how the Israeli army reached the leaders, in what is considered a “security breach” among the brigade commanders. He further pointed to concerns about Israel penetrating the wired communication network that al-Qassam Brigades established in the ground in recent years, covering all areas of the Gaza Strip, which leaders and members use to exchange military information.

The source said that Israel had previously tried to spy on the network for many years. Al-Qassam Brigades uncovered many of these attempts, most notably an attempt by a special force from the Sayeret Matkal unit affiliated with the Israeli Military Intelligence Directorate to plant spying devices on this network in the city of Khan Yunis, southern Gaza Strip, on Nov. 11, 2018, he added.

“Perhaps there has been a breach and the Israeli intelligence has succeeded in planting spying devices, allowing it to discover the whereabouts of the military leaders it assassinated. We are investigating this and will find out what happened as soon as possible,” the source noted.

Hisham al-Maghari, a researcher in security and strategic affairs, told Al-Monitor that Israel discovering the whereabouts of Hamas’ military leaders and targeting their hideout “is a major concern for the movement.”

He explained that it is concerned about whether Israel used technological techniques unknown to Hamas to reveal the locations of secret hideouts, or whether the information reached Israel through spies or a security breach in Hamas’ communications system.

However, Maghari does not believe the killing of these military leaders will impede Hamas’ ability to develop its rockets and its military production in the future, saying, “I think that Hamas has many experts competing in this field.”

Maghari noted, “Hamas will quickly draw lessons from this event [killing], and will work to prevent it from happening again.”

In addition to killing Hamas military leaders, Israel dealt a major blow to the movement’s financial facilities. On May 12-13, Israeli warplanes bombed the headquarters of the Finance Ministry in Gaza City and the two branches of the Islamic National Bank in Khan Yunis and al-Bureij camp in central Gaza, completely destroying them. Israel also bombed and destroyed the headquarters of the Palestine Production Bank in Khan Yunis.

Speaking to Al-Monitor, Mohammed Abu Jayab, economist and editor of the economic newspaper Al-Eqtesadia in Gaza, downplayed the importance of Hamas losing some of its headquarters and financial facilities.

He said the “destruction of the financial institutions, namely the Finance Ministry that collects taxes, does not mean that Hamas’ financial sources will be negatively affected, as these headquarters can easily be replaced by other places after this Israeli aggression ends.”