Israeli strikes have killed a large number of Hamas commanders and destroyed dozens of security, military and police sites in the Gaza Strip. 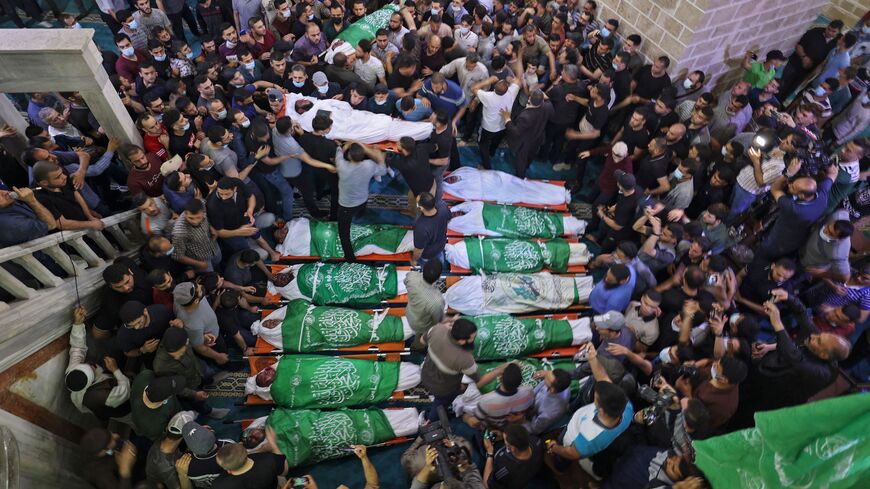 Palestinians gather to pray around the bodies of 13 Hamas militants killed in Israeli airstrikes during their funeral at the al-Omari mosque in Gaza City, May 13, 2021. - MAHMUD HAMS/AFP via Getty Images

GAZA CITY, Gaza Strip — The Israeli army killed a large number of Hamas military commanders May 12 during its military operation in the Gaza Strip that kicked off after armed Palestinian factions launched hundreds of rockets toward Israel May 10.

The rockets came in response to the Israeli police raiding Al-Aqsa Mosque and efforts to evict the inhabitants of the Sheikh Jarrah neighborhood in Jerusalem and give their houses to Israeli settlers.

According to the Palestinian Ministry of Health in Gaza, the Israeli military operation has so far killed 83 Palestinians including 17 children, seven women and an elderly person and wounded 388 others, including 115 children and 50 women.

On May 13, the Israeli army announced that it had struck 600 Hamas and Islamic Jihad targets in the Gaza Strip since the onset of the military operation up to that morning.

Israeli airstrikes destroyed three residential and office towers and dozens of houses and security and police offices in the Gaza Strip. Meanwhile, Palestinian factions continued to launch hundreds of rockets toward Israel.

The Israeli army announced May 12 that it had killed 16 high-level Hamas military operatives with close ties to the commander of the movement’s armed wing, Mohammad al-Deif, without giving any further details.

Palestinians were shocked by the killing of so many military figures, who were popular in the Gaza Strip. These commanders, who had made up the core of Hamas’ military project, include brigade commander for Gaza City Bassem Issa, Jomaa Tahla, Jamal al-Zebda, Kazem al-Khatib, Walid Shmali and Sami Radwan.

Hours after the strikes, the Izz ad-Din al-Qassam Brigades released a statement confirming the killing of its military leaders and several other operatives. An al-Qassam official told Al-Monitor on condition of anonymity that the brigades are investigating how the Israeli army reached the targets, whose location had been secret. He declined to reveal the location of the strike. The official stressed that retaliation for the deaths would be like nothing that Israel has ever seen.

Meanwhile, as a condition to reach a truce, Hamas is demanding that Israel halt the raids by police of Al-Aqsa Mosque, cancel plans to evict the residents of Sheikh Jarrah and end all military operations in Gaza.

Iyad al-Bazm, spokesperson for the Ministry of Interior in Gaza, accused Israel of deliberately destroying security institutions in the Gaza Strip.

He told Al-Monitor that dozens of security and police headquarters were destroyed in different parts of the Gaza Strip, including some correctional and rehabilitation centers affiliated with the Ministry of Interior, which under international law are not legitimate military targets.

Taher al-Nunu, media adviser to head of Hamas' political bureau Ismail Haniyeh, revealed to Al-Monitor that high-ranking European figures as well as officials from Egypt and Qatar had contacted the Hamas leadership to negotiate a truce with Israel.

Nunu said that Hamas wants a truce to stop the bloodshed but its demands must first be met.

On May 11, Israeli Prime Minister Benjamin Netanyahu said that the factions in Gaza will “pay a very heavy price” for the rocket attacks on Israel. Israeli Defense Minister Benny Gantz told Hamas May 12 that if it does not stop the rockets, the fallout will be heavier than that of the 2014 Gaza war.

Ibrahim Habib, a professor of security studies at the Management and Politics Academy in Gaza, told Al-Monitor that the Israeli operation against Hamas in Gaza will push the movement to conduct a major investigation into the leak that allowed Israel to kill so many military leaders.

Habib said that the killings won't stop Hamas operationally, saying, “Whoever knows Hamas realizes how institutionalized it is, and all leaders and officials have deputies" capable of replacing them.

Yusef al-Sharqawi, a retired major general in the Palestine Liberation Organization, told Al-Monitor that the strikes have dealt a blow to Hamas in the short term. Sharqawi added, “However, this targeting may be a greater incentive for Hamas and its allies — Iran and Hezbollah — to further develop their military capabilities."

Meanwhile, the residents of the Gaza Strip prepare to bury their friends relatives killed in the Israeli airstrikes.