Despite major losses against Israel, including the killing of two of its top leaders, Hamas still clings to victory narrative. 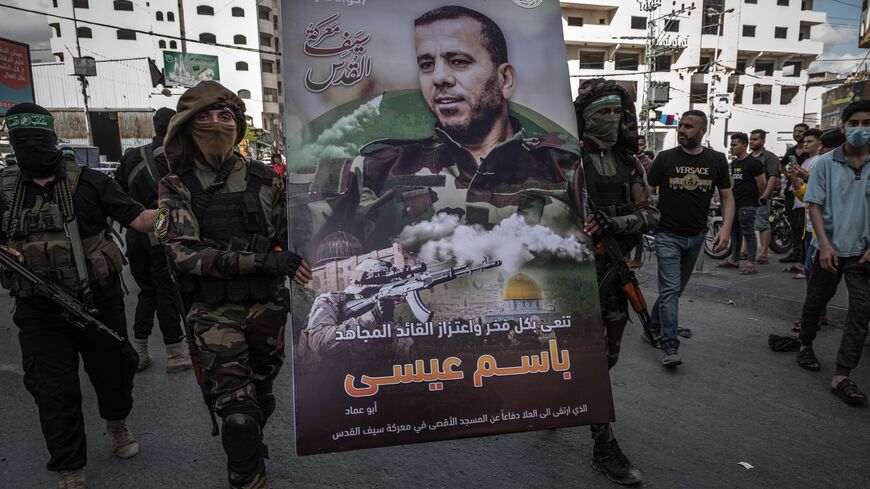 Fighters from Izz ad-Din al-Qassam brigades, the military wing of Hamas, march in tribute to Gaza City commander Bassem Issa on May 22, 2021, in Gaza City following the cease-fire. Issa was killed by an Israeli strike in Gaza City. - Fatima Shbair/Getty Images

GAZA CITY, Gaza Strip — Before Israel halted its escalation against the Gaza Strip after a cease-fire was announced May 20, it carried out a failed assassination attempt against Mohammed al-Deif, the general commander of Izz ad-Din al-Qassam Brigades, Hamas’ military wing, the Times of Israel reported May 19.

According to information from the Israeli military obtained by the Times of Israel, the most recent attempt took place May 17. Israel has been chasing Deif for 25 years for planning dozens of operations against Israel, the paper said, adding that past attempts to kill him cost him his eye, both of his legs and one arm. Israel missed its target during the 2014 Gaza war and killed instead his wife, infant son and 3-year-old daughter, the newspaper wrote.

During the recent escalation round, Israel killed 16 Hamas military leaders and members. On May 12, the Israeli army announced a complex and unique operation to assassinate a number of senior Hamas leaders in Gaza City and Khan Yunis, whom it described as important commanders of the brigades and closely associated with Deif. Shortly after the Israeli announcement, the brigades said in a statement that that the commander for Gaza City, Bassem Issa, and other field commanders were killed in an Israeli strike on Hamas positions in Gaza, adding, “These leaders had the honor of dying as martyrs, leaving thousands of leaders who will continue to walk the same path.”

Al-Monitor reported May 14 that these Hamas leaders were targeted while they were inside a secret tunnel the movement had dug under Al-Thalathini Street in central Gaza City.

Hamas spokesman Hazem Qassem told Al-Monitor that Israel failed to determine the location of many resistance leaders during the latest escalation in Gaza because the resistance was very much in control of the course of the battle; he said this was very shocking for Israel.

He said the Israeli army wanted to kill Deif because he was the one who warned Israel against continuing to attack the residents of the Sheikh Jarrah neighborhood and Al-Aqsa Mosque in Jerusalem. Israel sought to send its people the message that they have intel on the resistance leaders’ whereabouts, and that they tried to assassinate them more than once, which indicates the Israelis can accurately track the Gazans' moves, he added.

“We will not reply to the Israeli claims that they located Deif and that they tried to assassinate him more than once. The best reply came from the battlefield where Israel failed to assassinate many leaders, not only Deif,” Qassem added.

He said Israel sought, through these claims, to create instability within the resistance’s ranks. This is because the assassination of Deif, who has become a symbol of the resistance to Hamas supporters, would be seen as a great achievement and would have a major negative impact on Gazans' morale. But Qassem said that if Deif ever was assassinated, Hamas and the brigades would pick up where Deif left off.

Qassem said Hamas’ military network has a hierarchical structure and specialized personnel, which means that any assassinated figure is immediately replaced. “The assassination of Hamas’ brigade commander for Gaza City at the onset of the war did not stop the movement. All of his brigade’s components remained on the ground and fulfilled their jihad duty.”

He said that Israel’s assassination policy has been around for a long time and that Palestinians have developed a strategy to follow in the event of any such killing. He said, “We are not denying that the assassinations leave their mark on the movement, but the assassinations are something sacred in our faith, and they push us more and more to carry on the fighting.”

Ibrahim Habib, a political scientist at Ribat University, told Al-Monitor, “Deif is a symbol of the resistance, and has become a nightmare for Israel. It is a duty to keep him alive. Yet that does not mean that if Israel managed to kill him, an open war should be declared.”

Habib said, “It is up to the resistance to decide how to retaliate to his assassination. Hamas is an organized movement, and emotions are not part of any retaliation.”