Many observers believe Palestinians and Hezbollah both stand to lose more than they would gain if Gaza becomes a scene of retaliation for Samir Kuntar's slaying. 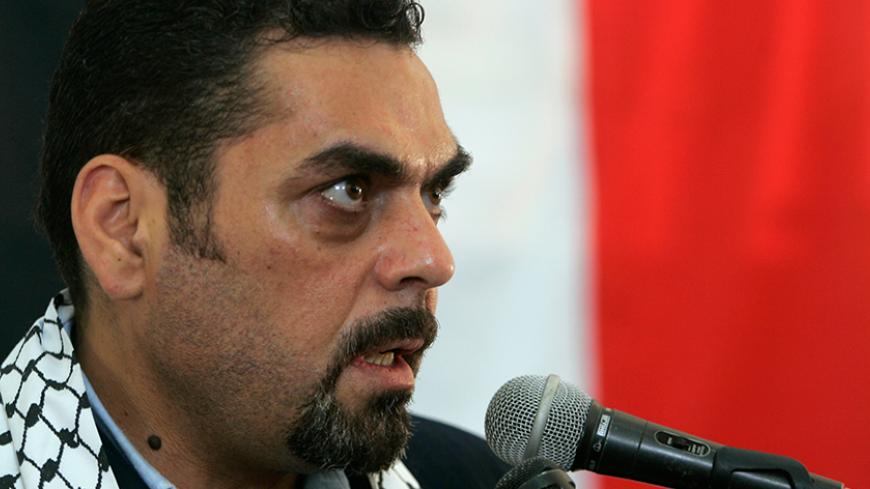 GAZA CITY, Gaza Strip — Palestinian resistance factions were prompt to denounce the Dec. 19 assassination of Hezbollah leader Samir Kuntar in a raid targeting Jaramana near Damascus, blaming Israel for his death. Some armed factions vowed to retaliate and continue their resistance against Israel.

Yet, their vows of retaliation seem more like supportive and sympathetic gestures than actual threats to escalate the situation with Israel in the Gaza Strip.

Hamas’ armed wing, the Izz ad-Din al-Qassam Brigades, mourned Kuntar in a Dec. 20 statement and pledged "to persist in jihad and resistance until defeating the occupation, achieving the right of return and liberating prisoners and holy sites.”

The Abu Ali Mustafa Brigades, the armed wing of the Popular Front for the Liberation of Palestine, announced Dec. 20 on its website, “We stress our loyalty to the martyred commander [Kuntar], to his blood and history. Avenging him is a sacred duty to all Arab resistance fighters. Today, [these fighters] have the responsibility to open a national resistance front against the Zionist enemies of the nation and whoever is associated with them.”

However, Abu Mujahid, spokesman for the coalition Popular Resistance Committees in the Gaza Strip, told Al-Monitor, “All speculation and expectations about a potential response on the part of Palestinian resistance factions depend on the actions of Israel on the ground. Hezbollah does not need to open a fighting front in Gaza, and does not need any party to retaliate [for Kuntar’s assassination] on its behalf. Palestinian factions believe that Hezbollah, with its military capabilities, and those backing the group, mainly Syria and Iran, are able to respond to Kuntar’s death without the help of Palestinian factions.”

Khaled al-Batsh, a leader in the Islamic Jihad movement, said in a Dec. 20 press conference in Gaza City that Kuntar’s death was “orchestrated.”

“The Israeli occupation forces are responsible for the operation and must pay the price,” Batsh added.

Hicham Salem, leader of the pro-Hezbollah and pro-Iran Al-Sabireen Movement For Supporting Palestine - HESN in Gaza, refused to comment on the matter. But Al-Sabireen mourned the assassination of Kuntar on its website Dec. 21 and pledged to Hezbollah secretary-general Hassan Nasrallah, "We promise God first, and we promise all the people of our nation, to remain steadfast and persistent in the path of resistance, which Kuntar forged with his great sacrifices inside the jails of the Israeli occupation forces."

Kuntar spent about 29 years in Israeli prison on charges of murder while conducting an armed attack in Nahariya in 1979. He was released in 2008 as part of a prisoner swap deal between Hezbollah and Israel. According to Israel, Kuntar then formed an armed cell in the Golan Heights known as the "Syrian resistance for the liberation of occupied Golan."

In a televised speech Dec. 21, Hezbollah's Nasrallah vowed to respond to the assassination of Kuntar as “he sees fit,” as the party accused Israel of Kuntar’s killing.

The map of Palestine drawn in the colors of the Iranian flag visible in the background during Nasrallah’s speech sparked wide controversy among Palestinian citizens. According to Hazem Qassem, a Palestinian writer and political analyst who spoke to Al-Monitor, the significance of the drawing was blown out of proportion in political analyses. “The drawing reflects attempts to amplify the role of Iran in the region. I do not believe Hezbollah could afford opening new fronts because of its involvement in the war in Syria and the internal crisis in Lebanon,” Qassem said.

Palestinian writer and political analyst Hamza Abu Shanab told Al-Monitor, “It is not in the best interest of Hezbollah to open a front in Gaza or to escalate the situation as this will not serve the interests of the movement loyal to the party and receiving its support inside the Gaza Strip. These movements, such as Al-Sabireen, do not wish further trouble with Hamas, which has full sway over the Gaza Strip in terms of security and military activities, as this would lead to a war.

“I do not believe that the pro-Hezbollah and pro-Iranian factions in Gaza are able to retaliate strongly to the assassination of Kuntar given the poor capabilities and armament,” he said.

Abu Shanab added, “Conditions were more favorable when Imad Mughniyah was assassinated back in February 2008. Mughniyah was more influential than Kuntar inside Hezbollah; nonetheless, pro-Hezbollah factions inside Gaza did not respond to his [Mughniyah’s] death. Any retaliation to the assassination of Kuntar inside Gaza will not come to the advantage of Palestinians, as much as it will adversely affect them.”

Mughniyah was considered a prominent military commander of Hezbollah. He remained on the Israeli and Western wanted lists of terrorists for nearly three decades, as he was accused of orchestrating the bombing of embassies and military sites and of conducting hijacking operations. He was killed in Damascus on Feb. 12, 2008, but Hezbollah has yet to retaliate.