How will Nasrallah retaliate for death of Hezbollah leader in Syria? 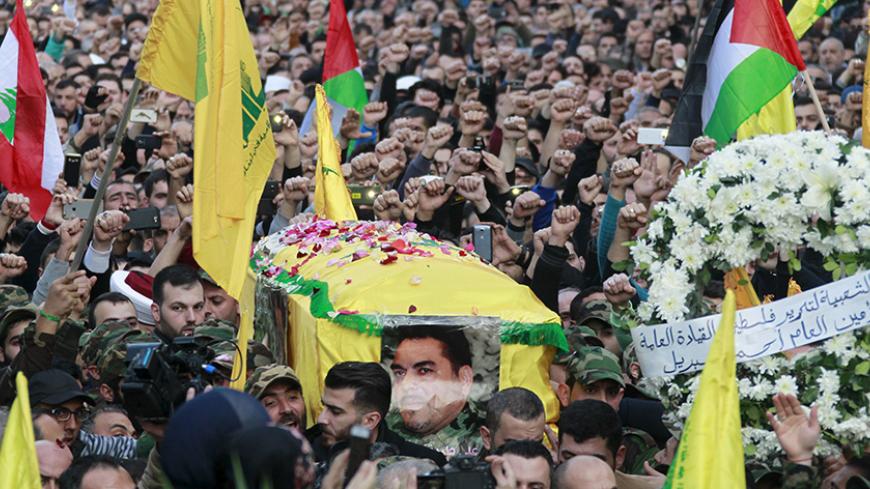 DAMASCUS, Syria — The night of Dec. 19 wasn’t any different from other nights in Damascus. The streets were full of cars, despite electricity blackouts; the coffee shops were packed with customers; a large group of Syrian and Lebanese journalists attended a wedding at the Sheraton Hotel; and Samir Kuntar, the Lebanese commander of the “Syrian resistance for the liberation of occupied Golan,” was at his residence in the suburb of Jaramana to the east of Damascus.

At 22:42 p.m., Twitter account Damascus Now tweeted: “Several mortars exploded in the city of Jaramana injuring several people.” This was to be normal, too, if it wasn't for the fact that what was thought to be mortars were missiles that destroyed the building and killed three men.

“Everyone in Jaramana knew that Kuntar lived in that building,” Mohammed, a Lebanese journalist in Damascus, told Al-Monitor on condition his last name be withheld.

He said, “They found the body, told the family, and it’s now all about Hezbollah’s statement in the morning.” At 4:18 a.m., Bassam Kuntar, Samir’s younger brother, tweeted the news: “With honor, we mourn Cmdr. Samir Kuntar and we proudly join the cavalcade of the martyrs’ families.”

Kuntar knew this would happen one day. In fact, he told pan-Arab news network Al-Mayadeen on July 1, “The most important thing is that even if Israel assassinated me, the path of resistance in Syria started and nobody can stop it.”

Kuntar discussed the issue with close friends and raised it with his leaders in Hezbollah.

“The Israeli threats on martyr Kuntar’s life existed from the day he was released, even before the issue of the popular resistance in the Golan Heights was discussed,” Hezbollah’s Secretary-General Hassan Nasrallah said in a speech on Dec. 21, mourning the man whom he described as “one of us,” and vowing revenge. “It’s our right to seek revenge and we will practice this right — let this be known to everyone,” Nasrallah stressed.

Nasrallah spoke in a significantly calm manner, in comparison with speeches on similar occasions. Yet he was concise to the point of saying, “There’s no doubt that Israel carried out the assassination. It was a roaring military operation, not a silent ambiguous intelligence attack,” he said. “I’ll repeat what I said in January 2015: Whenever any cadre from the Islamic resistance is killed, we will hold Israel responsible and we will respond.”

To Hezbollah, the assassination of Kuntar is part of a parallel war on a different arena with Israel, the Golan front, which he referred to in his speech.

Kuntar, according to an Iranian source, had been working on building the “Syrian resistance for the liberation of occupied Golan” since May 2013.

Kuntar was dispatched to Syria and started working on old plans to bring this front alive. These plans were first brought to life by former Hezbollah military Cmdr. Imad Mughniyeh, who was assassinated in Damascus in February 2008.

A Syrian military source told Al-Monitor on condition of anonymity, “For 2½ years, Kuntar worked on building cells from residents of areas close to the borders with the Golan Heights. He worked on providing them with training, arms and salaries.”

He added, “His group was getting bigger; his first local officer was called Moafak Badriyeh, a Syrian from the village of Hadar from the liberated part of the Golan Heights. Badriyeh was later killed by Israel. He was responsible for launching rockets at Israeli posts in the occupied Golan Heights and bomb attacks.”

In March 2014, three major incidents took place in the Israeli-occupied part of the Golan Heights: an attack on March 5, March 14 and March 18. The last attack saw one Israeli soldier killed and seven wounded, while four were injured during the second attack.

On April 26, four Syrian fighters were killed during a clash with an Israeli patrol in the Golan Heights. A statement issued that afternoon by the popular Syrian resistance read: “Four Syrian resistance heroes were killed Sunday evening, April 26, 2015. Two from Hadar — Youssef Hassoun and Samih Badriyeh — and two sons of the martyr prisoner Walid Mahmoud from Majdal Shams, Nazih and Thaer Mahmoud.”

An Iranian military source told Al-Monitor that efforts to build the Syrian resistance was a main task executed by Kuntar in coordination with Hezbollah and under the direct supervision of Iran’s Quds Force commander Maj. Gen. Qasem Soleimani and Nasrallah.

“This was an ambitious strategic project for the resistance bloc, and Kuntar played an important role in making it happen. He was assassinated by Israel and he already planned his own revenge,” the source said.

Earlier this year, on Jan. 18, five Hezbollah members and an Iranian general were killed near Quneitra on the border with the occupied Golan Heights, when Israeli helicopters launched an attack on their convoy. The victims included Jihad Mughniyeh, the son of Hezbollah’s slain commander Mughniyeh, and Mohammed Issa, who is said to be the Hezbollah commander responsible for the Golan front.

Kuntar was thought to be part of the convoy, as the first rumors suggested he was one of the slain commanders. But he wasn’t there. At the time, Hezbollah responded by attacking an Israeli convoy on Jan. 28, killing two Israeli soldiers.

“Israel’s efforts to hit the Syrian resistance before it gets bigger and stronger indicates how much they are afraid of this front,” said the Syrian military source.

He explained that Kuntar and his team crossed an Israeli red line, saying, “Israel can’t tolerate seeing this resistance embryo growing and becoming a real threat. This is not only about Israel, or even America. How can we link between Kuntar’s designation on the US terror list and his assassination; this for sure had an American green light.”

On Sep. 8, the US State Department designated Kuntar as a “specially designated global terrorist.” According to a statement published on its website, Kuntar “played an operational role, with the assistance of Iran and Syria, in building up Hezbollah’s terrorist infrastructure in the Golan Heights.”

All ears were on Nasrallah’s speech to see if Hezbollah was willing to respond. Yet he kept what could be described as a poker face, keeping all options on the table. Nasrallah said he will respond anywhere his group chooses, and this means putting all borders shared with Israel on high alert, not only in Lebanon but also in Syria.