Next Israel-Hezbollah confrontation could be in Syria

While the cease-fire brokered by the United States, Russia and Jordan seems to be holding for now in southern Syria, it might not last for long given the Israeli-Iranian rivalry in the region. 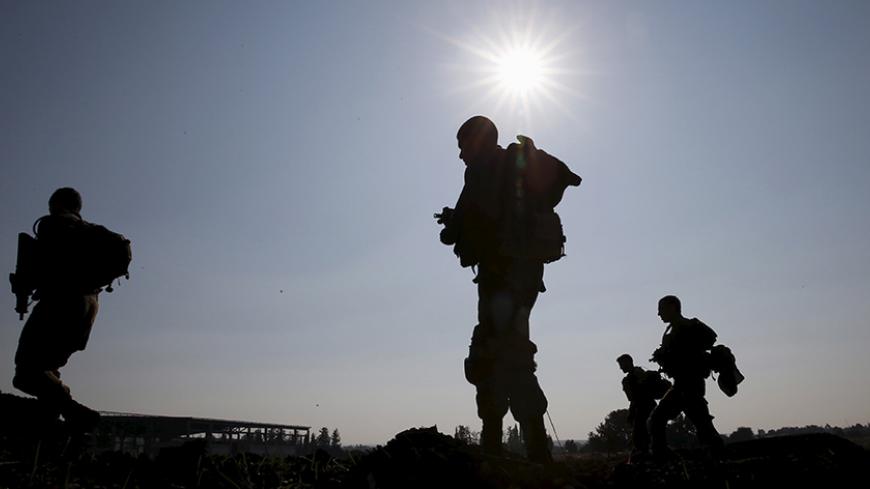 Israeli soldiers are silhouetted as they search for the remains of rockets fired from Lebanon, near the northern city of Nahariya, Israel, Dec. 21, 2015. - REUTERS/Baz Ratner

There is a relative calm in southern Syria in the wake of the July 7 US-Russian-brokered cease-fire agreement backed by Jordan. The deal came against the backdrop of increased clashes between pro-regime militias and the Syrian opposition, as well as escalating strikes by Israel on Iranian interests in the region. Yet the cease-fire will be difficult to hold in the long run given the strategic importance southern Syria holds for Iran and its proxy, Hezbollah. Such local dynamics mean that the possibility of a future showdown between Hezbollah and Israel is increasingly strong in southern Syria — more than in nearby Lebanon, Hezbollah’s bastion.

Russian troops in charge of monitoring the cease-fire appear to have deployed on July 17 in the Daraa province, according to Syrian Masdar News. The recent US-Russian deal included establishing de-escalation zones along Syria’s borders with both Jordan and Israel.

In early June, forces loyal to Syrian President Bashar al-Assad’s regime ramped up efforts to capture Manshiya in the Daraa region after the neighborhood almost completely fell into rebel hands after months of infighting.

“We are dealing with the new cease-fire positively, because it will put an end to the daily massacre of the Syrian people by the regime using barrel bombs and rockets,” Maj. Issam Al Reis, spokesman for the Syrian Southern Front rebel group, told Al-Monitor.

The southern insurgency is regrouped for the most part under the Southern Front label, which is a military and command structure that includes dozens of rebels opposing the Assad regime. Southern Syria is also home to a small Islamic State (IS) stronghold in the Yarmouk basin known as the Khalid Ibn al-Walid Army. On the other end of the spectrum, Reis said that pro-Iran militias are also fighting alongside the Syrian regime forces in the Daraa province, namely Lebanese Hezbollah, Iraqi Al-Nujaba'a Brigades and the Afghan Liwa Fatemiyoun.

While both Russia and the United States appear to be determined to maintain the cease-fire, Islamist factions including the former al-Qaeda affiliate Jabhat Fatah al-Sham (formerly Jabhat al-Nusra) have rejected it. Islamist machinations are not alone in endangering the long-term viability of the US-Russian deal. For Syria expert Sinan Hatahet — a researcher at Omran Dirasat, a Turkey-based think tank — who spoke to Al-Monitor, the Assad regime's priorities in the region could be met if the opposition agrees to share the control of the border with Jordan. “However, Hezbollah and Iran have other calculations, and it will be interesting to see if Russia can curb them,” he added.

Tensions have, after all, only been mounting between Israel on the one hand and Iran, Syria and its Lebanese proxy, Hezbollah, on the other. On April 23, Israeli airstrikes killed a number of Syrian soldiers at a weapons depot in rural Quneitra province concurrently with the targeting of the Golan Heights under Israeli control. On June 23, Israel attacked artillery positions and an ammunition truck that belonged to the Syrian army.

“The recent US-Russia-Jordan understanding resulting in a cease-fire in southwest Syria complies with both Jordan and Israel's needs to keep away the Iranians and their proxies from the Syrian-Jordanian border as well as the Golan Heights,” Avi Melamed, the Salisbury Fellow of Intelligence and Middle East Affairs at the Eisenhower Institute, told Al-Monitor.

Hezbollah and Iran have worked on building their presence in southern Syria, which they have eyed with great concern since the beginning of the Syrian revolution. The region is home to several communities — namely Sunnis, Christians and Druze — and is located on the strategic border of the Israeli-occupied Golan Heights. “Southern Syria is an entry door to Damascus — the regime’s stronghold — which is highly important for both Iran and Hezbollah,” Lebanese Hezbollah expert Kassem Kassir told Al-Monitor.

“Southern Syria also provides access to the Arab-Israeli conflict," he added, in reference to its proximity to Israel.

In January 2015, Jihad Mughniyeh, Hezbollah member and son of Hezbollah’s military leader Imad Mughniyeh, was killed in the Syrian province of Quneitra near the Israeli Golan Heights. Four other Hezbollah fighters were killed in the strike, including Cmdr. Mohammad Issa, an Iranian commander in the Syrian Golan Heights, Abu Ali al-Tabtabai and Ismail al-Ashhab. According to Lebanese website Now Lebanon, in February 2015 Hezbollah spearheaded a military drive into a rebel-held triangle of territory in southern Syria between Damascus, Daraa and Quneitra. The campaign was named Operation Martyrs of Quneitra.

In December 2015, Syrian reports claimed Israel killed Hezbollah member Samir Kuntar using surface-to-surface missiles. It was believed Hezbollah was training militiamen and Syrian government forces near the area of the strikes to be led by Kuntar. The training was dovetailed by Shiification efforts in the region, according to the work of Syria expert Aymenn Jawad al-Tamimi published on Syria Comment in March 2016.

Iran is not alone in attempting to create its own networks in this strategic area. According to a piece published by Syria Deeply, Israel has worked on creating a safe zone that runs 10 kilometers (6.2 miles) deep and 20 kilometers (12.4 miles) beyond the demarcation line of the Israeli-occupied Golan Heights. Still, according to Syria Deeply, Israel has funded and supported its own Free Syrian Army faction, which is known as the Knights of Golan Brigade (Liwa Fursan al-Joulan).

“Israel’s major interest is to make sure that Iran will not use the Golan Heights as yet another base [similar to Lebanon and the Gaza Strip] to launch attacks on Israel through proxies in the excuse of ‘liberating the occupied Golan Heights,’” said Melamed.

While the cease-fire seems to be holding for now, it remains to be seen if it can hold for the long term given the Israeli-Iranian rivalry in this particular region. Russia is taking all the necessary measures to defuse the situation. It has deployed 400 separation forces in the last week in southern Syria. Rami Abdulrahman, the head of the Syrian Observatory for Human Rights, declared July 19 on Al-Arabiya that Hezbollah had started to retreat from southern Syria.

Yet the Russian and Iranian agendas are on opposite sides of the spectrum. In March, an Iranian-backed Iraqi Shiite militia, the Al-Nujaba'a Brigade, announced it had formed a military force to “free the occupied Golan Heights.” In addition, Israeli officials have also criticized the deal, telling the Israeli Haaretz newspaper that the Americans and Russians had ignored Israel’s position almost completely. One official explained that the agreement was bad and “doesn't take [into account] almost any of Israel's security interests," and it creates a disturbing reality in southern Syria because it doesn’t include a “single explicit word about Iran, Hezbollah or the Shiite militias in Syria.”

Such a volatile context increases the chances of war in southern Syrian unless Russia is capable of reasoning with its two eternally at-odds allies, namely Iran and Israel. While many experts have been predicting a war between Hezbollah and Israel in southern Lebanon, the danger of a conflict may loom farther to the east in southern Syria.