Too much at stake for full-on conflict in southern Syria

Prioritizing de-escalation in southern Syria appears to be the regional consensus, but the rebels’ opposition to any deals could lengthen the process. 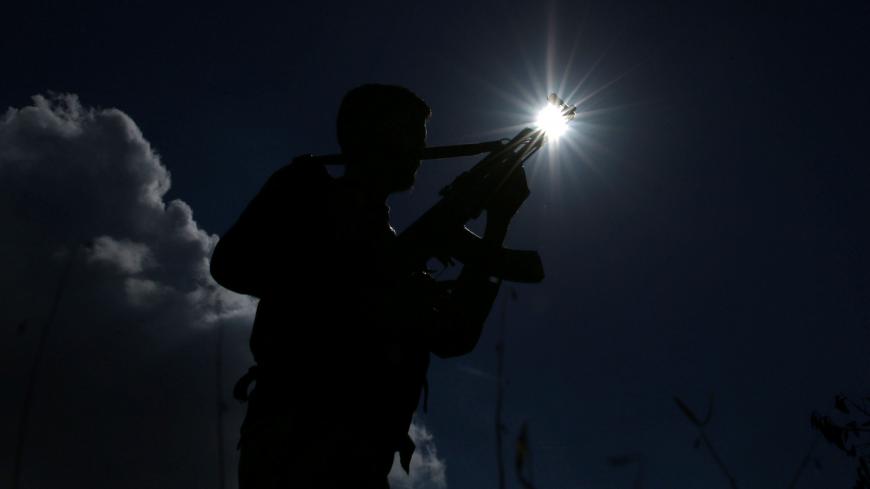 In the midst of an effort by Russia to contain regional tensions, specifically between Iran and Israel by attempting to find a deal in southern Syria, all eyes are focused on the latter where forces close to the regime of President Bashar al-Assad have been regrouping in the last week. In a June 13 interview with Iran's Al-Alam TV, Assad said that his government's next move regarding the region — whether it be retaking control by force or reaching reconciliation with local groups — had yet to be decided. Yet the strategic location of southern Syria, located on the border with Israel, as well as US, Jordanian and Russian concerns for an escalation, could result in a mixed approach involving a targeted offensive dovetailed mostly by successive deals with local councils, despite rebels’ opposition to the project.

Syria’s south is home to 1.3 million Sunni, Christian and Druze minorities. The area shares borders with Lebanon, Jordan and Israel and is dominated by the mainstream Free Syrian Army factions regrouped under the Southern Front. The latter is comprised of 20,000 fighters spread across the southern provinces of Quneitra, Daraa and Suwayda, according to Syria expert Sinan Hatahet from the Turkey-based Omran for Strategic Studies. The presence of jihadi groups is limited to a small number of Islamic State fighters affiliated with the former Yarmouk Martyrs Brigade and Harakat al-Muthanna al-Islamiyyah, which together formed the Khalid bin Walid Army, located mostly in the Yarmouk Basin, Hatahet told Al-Monitor.

“Only 200 or so members of Hayat Tahrir al-Sham remain in the region,” Bashar Zohbi, a commander of the Yarmouk Martyrs Brigade, told Al-Monitor. Contrary to other Syrian areas, Salafist jihadi groups have had little influence in southern Syria.

Since July 2017, southern Syria has witnessed relative calm after a cease-fire was brokered by Russia and the United States. From a military opposition standpoint, the southern region factions fall historically under the control of the Jordanian Military Operations Command (MOC) established in 2013 by the United States and which was in charge of financial and military support to the rebels.

However, in the last two years, rebel sources who previously spoke to Al-Monitor complained repeatedly of the dwindling and haphazard nature of the support of the MOC, which resulted in a decline in weapons supplies. The changing nature of rebel support was linked, as early as October 2016, by experts at the Washington Institute to a deconfliction center established in Amman that aimed at ensuring Russian air operations would not hit Jordanian ground forces in the border region, something that was only further exacerbated by the US-Russian 2017 deal.

At the level of pro-regime forces, a number of Syrian army battalions and loyalist militias have trickled into southern Syria. According to pro-regime website Al-Masdar news, these forces are led by the Tiger Forces and the 4th Division. “The Tiger Forces are tasked with retaking the southern districts of Daraa city, while the 4th Division will be split between the Quneitra and Daraa governorates,” Al-Masdar reported.

In addition, the Syrian army has also bolstered its air defense systems alongside the Golan Heights with the Pantsir-S1 air defense missile system. On June 12, it issued a warning to all rebel forces in Daraa and Quneitra to accept the regime’s reconciliation offer or they would launch an offensive.

“So far the option of a reconciliation and a limited offensive is more plausible than a full-fledged confrontation. We have also seen that the opposition heavy weaponry has been withdrawn from main front lines,” said Hatahet, who underlined that seven local councils have shown willingness to enter a reconciliation process with the regime. However, activist Abu Omar Joulani told Al-Monitor that only two councils were open to negotiations, namely in Mahaja and Kafr Shams.

“The military opposition is completely against regime-style negotiations, which will lead to our capitulation. We will continue to fight even without the consent of regional backers,” Zohbi said. Limited negotiations could nonetheless take place over specific issues such as the Nasib border crossing and the strategic hill of Tell Hara in the northern countryside of Daraa, Joulani noted.

Another concern for rebels is the Iranian presence in southern Syria, which has also been at the heart of Israeli and Russian negotiations. Haaretz underlined the visit of Defense Minister Avigdor Liberman May 31 to Russia where he discussed the possibility that Israel would accept a return by the regime to the region and the withdrawal of pro-Iranian militias some 70 kilometers (43 miles) to the east of the Damascus-Suwayda road.

Joulani explained that Hezbollah has several dozens of its commanders in the region, saying, “In addition, a commander in the pro-Iranian Abu Fadl Abbas movement — known as Abu Ajeeb — came to Quneitra to assess the situation.”

A source close to Hezbollah commanders deployed in Syria told Al-Monitor that Iran and Hezbollah were still present in Syria and were not considering any withdrawal. The source added that any reported troop movements were purely “tactical” in nature and curtailed to nonessential positions.

“Hezbollah may heed to Moscow’s demands in appearance only and could always infiltrate Syrian troops redeploying in southern Syria by having members dressed as Syrian soldiers embedded within regular troops,” he said June 5 — information later confirmed by The Wall Street Journal. “Infiltrating the Syrian army is not complicated for Hezbollah or Iran given that there is a strong current within the army that is absolutely loyal to Tehran,” Hatahet said.

Prioritizing de-escalation in southern Syria appears to be the regional consensus. However, the rebels’ opposition to any deals could lengthen a possible reconciliation process. In addition, the continued covert presence of pro-Iran militants in the area could represent another aggravating unknown.