Despite an escalation in Israeli attacks against Hezbollah in Syria, an all-out confrontation between them seems unlikely for the near future. 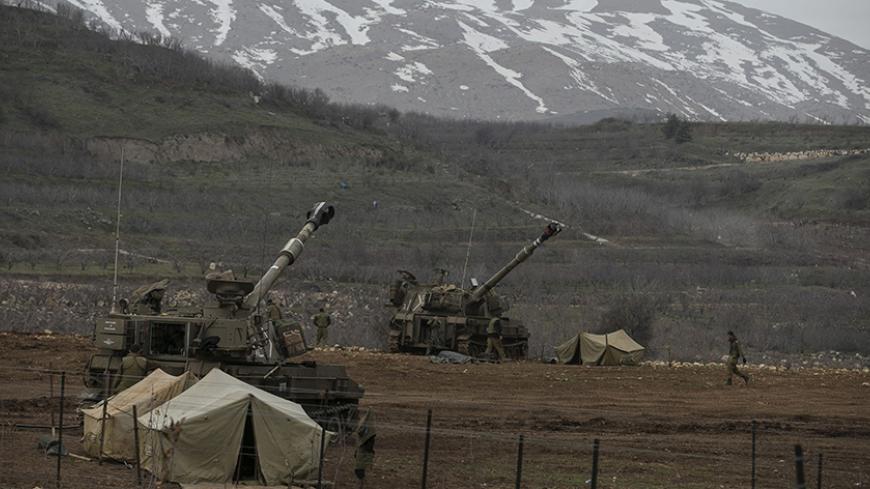 Israeli soldiers walk near mobile artillery units near the border with Syria on the Golan Heights, Jan. 27, 2015. - REUTERS/Baz Ratner

Israeli Transportation Minister Yisrael Katz pledged on Dec. 14 that his government would seek US recognition of Israeli sovereignty over the Golan Heights during the Donald Trump administration. His statement came in the wake of recent bolder-than-usual Israeli attacks against Syrian and Hezbollah interests.

On Dec. 7, the Israeli army targeted the Syrian heartland, hitting the Mazzeh air base with several surface-to-surface missiles. The base, southwest of Damascus, is home to Syrian air force intelligence headquarters. Another strike was reported later that same night, targeting Hezbollah sites near the Syrian capital, in the Zabadani area. The airstrikes were the second within a week in Syria attributed to Israel.

Another attack had been reported Nov. 30, on an arms convoy near Damascus. International media suggested that Israel had hit the convoy because it was transferring weapons to Hezbollah, which is currently engaged in the Syrian war in support of President Bashar al-Assad's forces. The strikes are indicative of the long-running covert war between Hezbollah and Israel.

Avi Melamed, an Israeli affairs expert at the Eisenhower Institute in Washington, told Al-Monitor that the repeated Israeli attacks shed light on Israel’s main priorities in Syria. He observed, “Israel has made it clear that it won’t accept Hezbollah's attempts to acquire what is defined by Israel as ‘balance breaking’ weapons, such as weapons of mass destruction, advanced ground-to-air missiles, etc.”

After the Nov. 30 attack, Israeli Defense Minister Avigdor Liberman, addressing a gathering of European Union representatives, stated that Israeli governments have always sought “to protect our sovereignty, and we are trying to prevent the smuggling of advanced weapons, military equipment and weapons of mass destruction from Syria to Hezbollah.” Liberman’s statement was a rare claim of responsibility by Israel for attacks on Syrian soil.

“Israel won’t tolerate attacks being launched from Syrian territory on its home turf, including the Golan Heights, or allow Iran to establish and operate a new military front against Israel on the Syrian side of the Golan Heights,” Melamed explained.

Gen. Amin Hoteit, a Lebanese military expert, shared Melamed's opinion, telling Al-Monitor that Israel’s red lines in Syria are two-pronged. “Israel won’t allow the emergence of a resistance movement in the Golan area similar to what took place in Lebanon,” he said. “It also won’t tolerate attacks on Israel from the Syrian border areas.” Israel ended its occupation of south Lebanon in 2000 after a yearslong war of attrition with Hezbollah.

Hoteit explained that these red lines have determined the nature of Israel's military operations in Syria, which he said have been of three types. “The first type of strike is a simple show of force by Israel to maintain balance of power,” he said. “Since the beginning of the war in Syria, at least six strikes of this type have been conducted in the Damascus area, targeting alleged Hezbollah interests without leading to any losses in the organization.”

The second type is defensive strikes targeting key Hezbollah figures. In December 2015, Syrian reports claimed that Israel had killed Samir Kuntar, who spent decades in an Israeli prison on terrorism charges, using surface-to-surface missiles fired from Israel. In January 2015, Jihad Mughniyeh, Hezbollah's commander on the Golan and son of Hezbollah commander Imad Mughniyeh, was killed in Quneitra. Also killed in the strike were commander Mohammad Issa, Iranian commander on the Golan Abu Ali al-Tabtabai and Ismail al-Ashhab. It was believed that Hezbollah had been training militiamen and Syrian government forces somewhere in the area of the strikes.

The third type of operation involves Israeli secret missions targeting key figures and resources. These have been kept under the radar by Syria and Hezbollah as well as Israel. “I believe that several operations have targeted areas of Damascus and Tartous, without being reported,” Hoteit said.

Hezbollah has remained mum about the recent Israeli operations. The organization had replied in restrained fashion to previous strikes, the boldest retaliation without a doubt following Mughniyeh’s killing, when it targeted an Israeli border patrol with an improvised explosive device, killing two soldiers in the Shebaa Farms area.

Hezbollah has been stretched thin in Syria, where it is believed to have deployed more than 7,000 fighters on multiple fronts since the beginning of the war, according to sources speaking on condition of anonymity. Opening a new front with Israel does not seem to be a priority for the organization, which is focusing for now on buttressing the Assad regime, an important ally.

“Given the current conditions prevailing in Syria and Lebanon and taking into consideration the interests and factors involved, the likelihood of a massive Israeli-Hezbollah confrontation in the foreseeable future appears to be low,” Melamed assessed.

According to Hoteit, the elements that could lead to a military operation against Hezbollah appear to be missing. “The guarantee of a successful mission, the possibility to strike and more importantly to translate a victory on the political scene are not available on the Israeli side,” he explained.

The conflict between Hezbollah and Israel thus appears to be contained for the moment, despite the recent escalation by Israel, putting the prospects of an all-out war on hold for the near future.