Syrian military sources tell Al-Monitor that Israeli warplanes struck storage depots with Iranian weapons that were to be sent to Hezbollah in Lebanon. 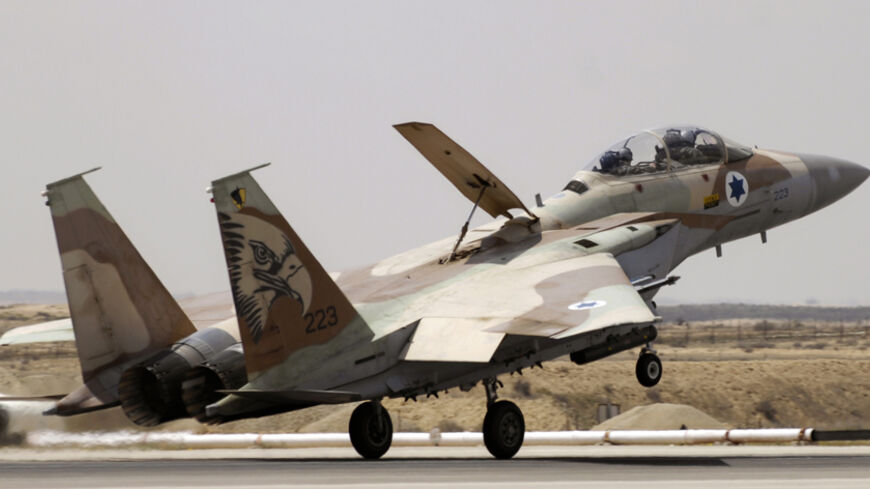 DAMASCUS, Syria — Israel has launched at least four airstrikes on Syrian military sites since the start of the Syrian civil war, but the attack on Dec. 7 was the most extensive in terms of the number of targeted sites.

Israeli warplanes targeted military sites in Dimas, 25 kilometers (15.5 miles) northwest of Damascus and located on the Damascus-Beirut road at the foothills of the Anti-Lebanon Mountains. They also targeted Damascus International Airport, 25 kilometers east of the capital, according to a statement issued by the Syrian armed forces and reported by the official Syrian news agency, SANA.

The warplanes targeted a Syrian military airport in the Dimas area, according to a Syrian pro-government journalist who covers Syrian army operations in the capital and its suburbs, and who spoke to Al-Monitor on condition of anonymity.

A Syrian soldier who serves in Dimas told Al-Monitor on condition of anonymity that the targets were arms destined for Hezbollah in Lebanon.

“The Israeli shelling that targeted the Dimas airport hit the building where these shipments are assembled, and it hit the first truck that left the area toward the border,” the soldier said, noting that two of the Hezbollah fighters who were escorting the truck were killed in the airstrike and a third was wounded.

In addition to the Dimas airport, the Israeli warplanes bombed a repository of surface-to-surface missiles in the region, as well as the 105th Brigade, according to the journalist who visited the attacked site in Dimas.

Upon his return from the targeted sites to Damascus, the journalist said, “The damages incurred by these military centers are great, and the targets are mostly depots of weapons and missiles. Moreover, a Sukhoi military aircraft that had landed a few minutes before the raid at the Dimas airport was also affected by the bombing.”

The journalist said that the bombing was not limited to the military points and installations of Syrian government forces in Dimas, but also included the town of Yafour, located near Dimas. “Raids affected the farms around the town of Yafour, where an air defense battalion belonging to the Fourth Brigade is located. Moreover, trucks in the town’s farms were targeted, but we were not allowed to access these or even take photographs. This road is usually taken by military trucks to transfer weapons from Syria to Lebanon,” he said.

The journalist pointed out that the control center of the Syrian army in al-Sabboura area, adjacent to Dimas and Yafour, suffered minor damage from the Israeli bombardment.

The journalist elaborated on the bombing of Damascus International Airport, stating that the military wing of the airport was hit, “meaning areas of concentration of the Syrian army units. It also hit the exports and imports building, through which the Syrian authorities are now receiving military shipments and storing them there before transporting them to other areas for use. The damage to the building was great.”

The journalist stressed that although he reached the airport an hour after the Israeli raid, the explosions in the building were still ongoing. “One of the officers there confirmed to us that the explosions were caused by the large number of rockets in the building depots, and the military forces asked us to immediately leave the site and did not allow us to stay until the fire was extinguished,” he said.

With the intensification of the armed conflict, the Damascus International Airport has turned into a hub for weapons supplies coming to Syria, the soldier explained.

“Ever since insurgents took control of large areas in the vicinity of the capital and in the north, all weapons are entering Damascus through the airport, and they often come from Iran. Once they reach the airport, they are transferred by air to the Dimas airport, or overland through the Damascus-Beirut road, where they are loaded in trucks and subsequently transported to the Lebanese border via al-Sabbour and Yafour to Hezbollah,” the soldier said.

As soon as the news of the Israeli raids on Syria spread, the Syrian regime was widely criticized on social networking sites. Both loyalists and opponents took advantage of what the Syrian political leadership has been accustomed to say after each Israeli raid: “The right to respond.” One Twitter user wondered about the number of times the regime refrained from using its right to respond since the first Israeli raid on Syria. Meanwhile, another tweet mocked the nonchalance of official media outlets toward the Israeli raids, noting that they continued to broadcast their regular programs without regard for the airstrikes.

The Internet was no different from the reality; all Syrians, especially the loyalists, were angry, while fear and alert were clear at the checkpoints in the capital.

Syrians now have to guess where the aircraft flying over their heads come from and which area will be bombarded next. Maria, a college student, told Al-Monitor on condition her first name only be used, “Arab and Western planes fly in our skies, which are now even open to Israeli planes. Where is the sovereignty that they were talking about? I fully support the regime against the terrorists who want to ruin Syria, but this is no longer bearable.”

Pro-regime reporter Rami al-Sayed believes that the regime ought to stop the issuance of such pathetic statements following every Israeli bombing. “They do not have to repeat the drill that they will retain the right to respond; either respond to the raids or keep silent. What is funny this time is that they issued a statement in which they did not retain the right to respond,” he told Al-Monitor.

Concerning the impact of the Israeli raids on the situation in Syria, retired Brig. Gen. Hafez Nabil told Al-Monitor, “The recent Israeli strikes are in no way linked to the military or political situation in Syria. … The Israeli operation is mainly targeting the batches of arms sent to Hezbollah.”

“Israel is not quite interested in what is happening in Syria, with the exception of the border area in the occupied Golan Heights. The raids carried out on Sunday [Dec. 7] were targeting a new batch of Iranian weapons heading to Lebanon — following the batch of Iran-made Fateh 110 advanced missiles — especially since the political and security chaos in Syria made the smuggling of advanced weapons easy,” he added.

It would be hard to see how the rebels could take advantage of the airstrikes, according to Nabil. “The Israeli attacks are of no benefit to the opposition forces; the operation took place in areas relatively far from the front lines with the armed groups, with the exception of their groupings in Zabadani, where the Syrian army contains them and prevents them from moving toward Lebanon or inside Syria. Along with the second Syrian army legion, the Syrian army controls the main highlands along the Lebanese-Syrian border region.”

Nabil said that the Israeli raids on Syrian sites might be linked to the Israeli domestic situation. “[Israeli President] Benjamin Netanyahu’s conflicts with the other Israeli parties have placed a great deal of pressure on him. Netanyahu is used to exploiting external factors to relieve pressure on his party and show that he is capable of protecting Israel and defending its interests.”

This is not the first time that Israeli warplanes have bombed the Syrian army, and it will likely not be the last as long as this war continues.