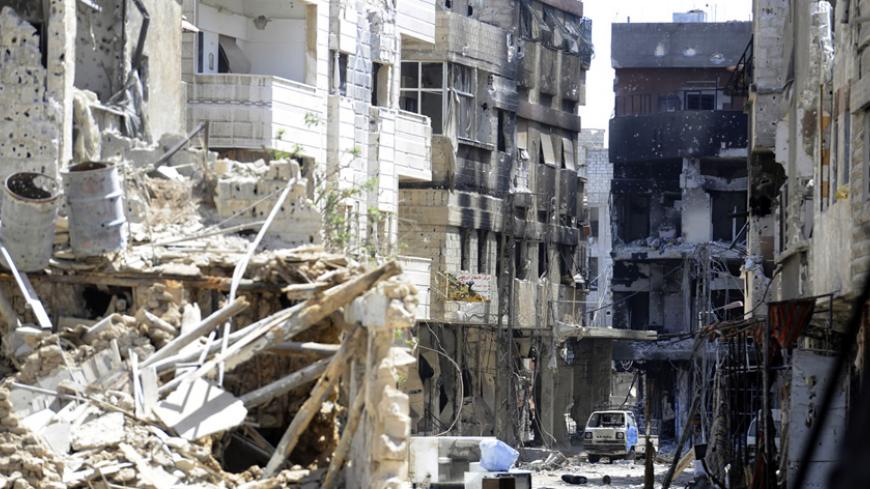 A general view shows damaged buildings in Mleiha, on the edge of the eastern Ghouta region near Damascus airport, Aug. 15, 2014. Syrian government forces backed by Lebanon's Hezbollah took control of a town just outside Damascus from Islamist fighters. - REUTERS/Omar Sanadiki

Ben Caspit writes that Israeli airstrikes against Hezbollah assets in Syria on Dec. 7 were part of a broader game of deterrence between Israel and Hezbollah, not an act of provocation.

“Israel as well as Hezbollah are not interested in an escalation. Neither side wants to be dragged into a comprehensive war and prefers a policy of containing the events, not escalating them.”

However, Caspit warns that with the current instability in the region, “a possible explosion is more imminent than ever.”

Khaled Atallah reports from Damascus that the Israeli airstrikes on Syria provoked backlash against the government from even those Syrians who support President Bashar al-Assad:

“As soon as the news of the Israeli raids on Syria spread, the Syrian regime was widely criticized on social networking sites. Both loyalists and opponents took advantage of what the Syrian political leadership has been accustomed to say after each Israeli raid: ‘The right to respond.’ One Twitter user wondered about the number of times the regime refrained from using its right to respond since the first Israeli raid on Syria. Meanwhile, another tweet mocked the nonchalance of official media outlets toward the Israeli raids, noting that they continued to broadcast their regular programs without regard for the airstrikes. The Internet was no different from the reality; all Syrians, especially the loyalists, were angry, while fear and alert were clear at the checkpoints in the capital.

“Syrians now have to guess where the aircraft flying over their heads come from and which area will be bombarded next. Maria, a college student, told Al-Monitor on condition her first name only be used, ‘Arab and Western planes fly in our skies, which are now even open to Israeli planes. Where is the sovereignty that they were talking about? I fully support the regime against the terrorists who want to ruin Syria, but this is no longer bearable.’”

US favors "diplomatic process" in Syria

In unusually straightforward testimony, Brett McGurk, US deputy special presidential envoy for the global coalition to counter ISIL and deputy assistant secretary for Near Eastern affairs (Iran and Iraq), told the House Foreign Affairs Committee on Dec. 10: “We do not see a situation in which the rebels are able to remove him [Assad] from power. … It will have to be a diplomatic process.”

On the same day, the Senate Foreign Relations Committee passed a draft authorization to use force against the Islamic State (IS) that ruled out the use of US combat troops, while calling for a “comprehensive strategy” linking military means to political ends in Syria and Iraq.

As UN Syrian envoy Staffan de Mistura this week took his pitch for a conflict freeze in Aleppo to leaders of the Syrian National Coalition in Istanbul, Mohammed al-Khatieb reported on Syrians in rebel-held portions of Aleppo planting small gardens and doing anything they can to prepare for the anticipated attack by advancing regime forces.

“The preparations for the blockade are not limited to adults. Ahmad, 13, started planting vegetables around his house in Masaken Hanano neighborhood. The garden by the damaged building where he lives is filled with vegetables, after its trees were cut to use their wood for heating. ‘I plant vegetables so that we can have food to face hunger. My family is poor, and my father is crippled, as he was wounded in the shelling,’ Ahmad said. In his modest garden, Ahmad planted mint leaves, potatoes and fava beans. While he was picking green peppers, he told Al-Monitor, ‘This garden will get us through the tough times, but I do not know if it will be enough in case we find ourselves under siege.’”

On a visit to Washington this week, John X, the patriarch of Antioch and all the East based in Damascus, spoke with Julian Pecquet about the plight of Christians and how to end the conflict in Syria:

“Everywhere we go they ask us, are you remaining in Syria, or Iraq, or Lebanon? It’s a very sensitive and difficult topic. But we believe the solution is not to send war ships or ships for transportation to take us abroad. We ask all the governments to push for peace. If you want to help us as Christians, to protect us as Christians, you have to find a peaceful solution for Syria and for the Middle East. You can’t protect me only, if my neighborhood is not well.”

This column has covered increasingly assertive Russian diplomacy regarding Syria and the region, including Russian efforts, parallel to those of de Mistura, to open up communication between the Syrian government and the opposition. Vitaly Naumkin writes this week that Moscow’s diplomatic initiatives include engagement on the Israeli-Palestinian issue, and an official visit by Deputy Foreign Minister Mikhail Bogdanov to Lebanon, where Russia and Lebanon share an interest in confronting Islamic extremists. Bogdanov also quotes Lebanese Foreign Minister Gebran Bassil as saying, “Russian companies will have an important role to play in the development of offshore oil and gas.”

Jean Aziz reports that Bogdanov may have met with Hezbollah’s Secretary-General Hassan Nasrallah to discuss Syria: “The most interesting theory holds that Bogdanov's visit was planned exclusively around Syria, not Lebanon, and that his three days in Beirut were solely to meet with Hezbollah Secretary-General Hassan Nasrallah. After all, Nasrallah is a key player in the Syrian crisis, on the ground and politically. No details were leaked about their talks, which leaves room for interpretation. Thus, Bogdanov’s wide-ranging visit to Lebanon might have only aimed at discussing Russian moves in Damascus and its plan to gather the warring parties around a new negotiating table to take a slightly different path than the Geneva conference.”

Walid Jumblatt, leader of Lebanon’s Druze Progressive Socialist Party, said in an interview with Al-Monitor’s Ali Hashem that there is “no solution with Assad in power.”

Jumblatt, who met with Bogdanov last week in Beirut, said that Russia “is looking for a political solution for the crisis in Syria. I told him I am with a political solution that preserves the institutions of the Syrian government. Yet, there is no solution with Bashar al-Assad in power. There might be a transitional period agreed on with the opposition; there is no problem with that, I am not the decision-maker here, as it is all about a Russian attempt to stop the war. I said two years ago in Moscow that the political solution needs the opposition’s approval. But when we say opposition, which opposition do we mean? There are many, so it is beyond me.

“The region is out of control. No one can predict [the future], even the world powers, as they are only trying to do so — Russia is trying.”

Fehim Tastekin writes that Turkish President Recep Tayyip Erdogan, who has far eclipsed the largely ceremonial role set out for the president in the constitution, has essentially set up a shadow government of directorates to keep watch over Prime Minister Ahmet Davutoglu and his Cabinet:

“There are serious concerns that the work of the directorates will go beyond monitoring and become intervention in planning, project formulation and implementation phases. Even today Erdogan does not hesitate to intervene in the work of ministers. He calls on members of the parliament to inquire about the progress of projects in their constituencies. Erdogan’s already-established methods of work signal that the new directorates within his General Secretariat will function as a ‘shadow government’ or even as ‘parallel cabinet.’”

In Washington, Julian Pecquet reports that some members of Congress have urged the US Department of Treasury to take “all necessary measures” against Qatar and Turkey if they continue to support Hamas.

While Hamas Chairman Khaled Meshaal and other members of the group’s leadership reside in Qatar, Pecquet writes: “Turkey is also on lawmakers' blacklist for serving as the headquarters for Saleh al-Arouri, whom lawmakers accuse of heading the group's terrorist operations in the West Bank.”