Ali Hashem reports on reactions from Syria and Hezbollah, blaming Israel for the attacks on Damascus that represent an escalation of the Syria war. 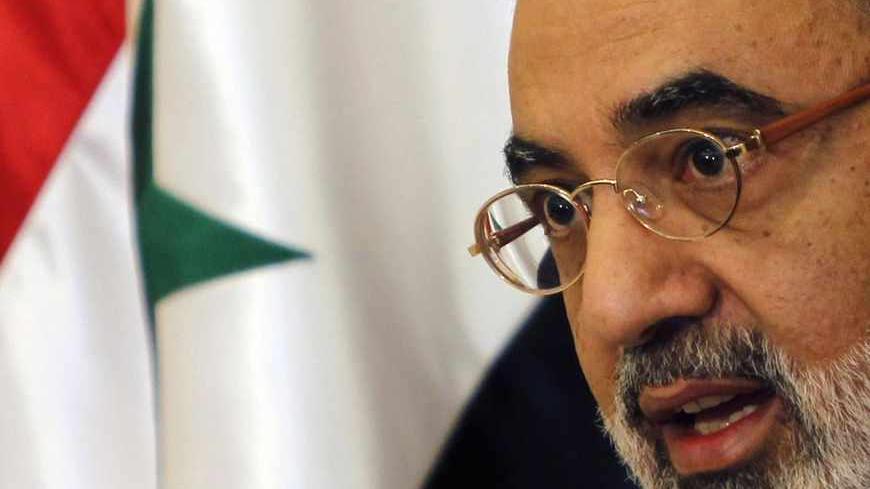 Syrian Information Minister Omran al-Zoabi speaks during a news conference in Damascus, May 5, 2013, after a cabinet meeting which discussed the Israeli airstrikes. - REUTERS/Khaled al-Hariri

Israel could now be considered a full party to the Syria war, as Syrian state TV reported Israeli warplanes launched an attack on a research facility around Damascus on Sunday [May 5]. No further details were given.

According to sources close to the government in Damascus, speaking on condition of anonymity, there were at least four attacks — against the Jamraya research facility, an arms depot and an airport in Dimas. The largest was on Brigade 105 in Mount Qasioun.

"There were big losses in personnel and armory," said one source, stressing that some opposition groups also launched attacks on regime forces around Damascus.

A senior Syrian source told Al-Monitor: "Syria has deployed missile batteries aimed at Israel, and it will provide Hezbollah with more sophisticated weapons they did not have before."

The attacks came only a couple of days after Israeli warplanes targeted an arms depot at Damascus International Airport, destroying, according to sources in Syria, surface-to-surface missiles that were allegedly heading to Hezbollah in Lebanon.

The attack on the airport was first claimed by the rebels, and even the pro-regime media were speculating that the attack was by rebel missiles. A huge explosion was seen from the airport where a civilian plane was destroyed, too.

"During that night the sound of a warplane was clearly heard," said one source in Damascus, "and many thought it was the army's MIG trying to target opposition fighters."

While not offering official comment, Israel reportedly wants to block the arms path to Lebanon, but what does Hezbollah think of this?

According to sources close to the group: "Israel is bluffing, it's just another copy of January's attack, Hezbollah succeeded in getting some effective weapons into Lebanon, and Israel received the news a bit late," he added, "for days Israeli warplanes covered the Lebanese skies flying on low latitude, they were trying to trace anything and when they failed they attacked."

The source believes that the direction of the war in Syria is also of a big concern in Israel. "They saw the regime regaining power in several areas, mainly in the Damascus countryside and Homs, this might be another reason for them to intervene via some limited but game-changing strikes."

What about the response, I asked my source, adding that for years Syria has been giving the same position whenever an attack occurred. The Syrians are famous for their, "we will respond in the appropriate time and by the appropriate means," what made it a joke to many.

"Syria has the right to do whatever it sees appropriate; Hezbollah will not push them to respond, though there are circles in the group that believe an equation should be set ASAP," revealed our source, who hinted, "on the contrary any attack on Lebanese soil won't go without a reply."

There are fears among many that Israel is dragging Hezbollah into a war, but is waiting for the pretext. According to those, this is the best time to besiege the group from all directions. The situation in Syria is no more appropriate for Hezbollah's supporters and Shiites in general to cross the borders as in the 2006 July War, likely adding pressure on the group and its base.

"If Hezbollah is dragged into a war, they will fight to the end, and as Hezbollah leader Hassan Nasrallah said, they have everything they need inside Lebanon," said our source, adding that "Israel knows Hezbollah very well, and this time it's not like any other time."

The Israeli attack leaves little doubt that Assad and the rebels fighting to topple him are becoming elements in a regional conflict, rather than main players in a domestic struggle over power.

Ali Hashem is an Arab journalist serving as Al Mayadeen news network's chief correspondent. Until March 2012, he was an Al Jazeera war correspondent, and prior to that he was a senior journalist at the BBC. Ali has written for several Arab newspapers, including the Lebanese daily As Safir, Egyptian dailies Al-Masry Al-Youm and Aldostor, and the Jordanian daily Alghad and has also contributed to The Guardian.