Hezbollah leader Hassan Nasrallah has announced that the next phase of the Syria war will not be limited to Syria, but will include Lebanon and Israel as well, reports Ali Hashem. 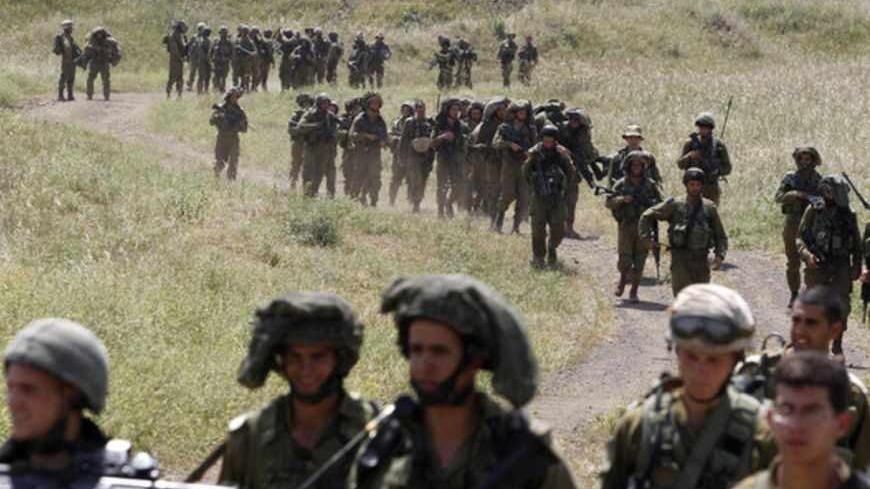 Israeli soldiers walk together during a training close to the cease-fire line between Israel and Syria in the Israeli-occupied Golan Heights, May 7, 2013. - REUTERS/Baz Ratner

Amid the Israeli strikes on Damascus on May 5, fears of a widespread war in the region entered in the hearts and minds of many.

In Lebanon, people know well what a war with Israel means. The last experience in July and August 2006 gave them a clear image of the devastation that might occur — and the death toll.

Those same people also know that today's Hezbollah is not to be compared with the one that fought the 2006 war. It is much better armed and trained, and its army is to be counted in the tens of thousands, according to what the group's chief Sayyed Hassan Nasrallah said on Feb. 14, 2008, at the funeral of his slain commander Imad Mughniyah about his army of of fighters.

On Lebanon's southern borders, life seems normal. Israeli warplanes flying at low latitudes have a minimal effect on people's lives. Therefore, it's common to see children playing a couple of meters from the border. People here agree a destructive war is imminent, an unprecedented confrontation, maybe a regional one that might kill thousands if not tens of thousands. That's why they decided they want to live their lives fully until the last minute.

But what if this last minute were so close that no one could avoid the destruction?

For both Hezbollah and Israel, the next war will tolerate no tie; there should be a clear winner. Israel, according to observers, is at full strength, given the regional situation and the drills it went through all these years, including the last war with Hamas. Israel has tested the Iron Dome, and it proved to be relatively efficient. What about Hezbollah?

On May 9, the group's chief made his first comments on the Israeli strikes on Damascus, saying, "Israel seeks to totally remove Syria from the equation in order to besiege the resistance in Lebanon and Palestine." Nasrallah pointed out that Israel bombed Syria to say that backing the resistance and supplying it with military aid will lead to the downfall of the regime.

According to Nasrallah, the Syrian strategic response was that of "launching the popular-resistance campaign in the Golan Heights" and Damascus' decision to supply Hezbollah with "game-changing" arms.

What does this mean? For years, Israel has been speculating that Hezbollah has between 40,000 and 60,000 rockets. The number was never confirmed by Hezbollah, but many know that from 2006 up to now, the group has been stuffing its depots with all kinds of weapons. The main passage was via Damascus, but there are obviously other secret routes.

In the 2006 war, Hezbollah proved to have the upper hand in the anti-tank area, destroying dozens of Israel's tanks. The group also targeted the Israeli warship Hanit 5, killing several Israeli crew members.  Hezbollah was also capable of firing around 4,000 rockets into Israel in a range that touched the city of Hadera 80 kilometers (50 miles) from the Lebanese border. Hezbollah's main weakness in 2006 and during all other battles fought with Israel was air defense.

In any new war, it's clear that Hezbollah's strategy will differ. In his Feb. 17, 2011, speech Nasrallah said, "In the last war, there were limited rockets in the north. In the next war they'll be aiming for all of Israel." He added, "I say to the fighters of the Islamic Resistance: Be ready. If a new war is imposed on Lebanon we may ask you to take Galilee, to free Galilee." With this statement, Nasrallah was responding to threats by Israel's then-defense minister Ehud Barak to march into Lebanon.

This is a clear indication that the scale and objectives of the next war from Hezbollah's point of view will be different. And here also we might go back to Nasrallah's May 10 speech, when he mentioned the Golan Heights as an area for resistance.

According to a source close to Hezbollah, borders dividing Lebanon and Syria in any new war will disappear and "the resistance will be fighting and launching rockets from anywhere. The Golan will be part of any new war. To be clearer, the next confrontation with Israel will be over 195,000 square kilometers rather than only 10,000." When I asked whether "game-changing" arms mean air-defense systems or missiles, our source suggested, "It might be air defenses, and might be long-range missiles with bigger warheads. It might be anything the Israelis might think, or might not think of."

The next war is what everyone is waiting for on the two sides of the border, but it might be that Syria, too, should be waiting, given that the Syrian civil war has ceased being a war between Syrians and is now a regional conflict. While there may be a case for Syrian and Hezbollah restraint, for now, Nasrallah has declared that the next escalation will include Israel's Golan border, linking the party's struggle in Syria against its longstanding opposition to Israeli occupation of Syrian and Lebanese lands.