An exclusive report from Qusair. 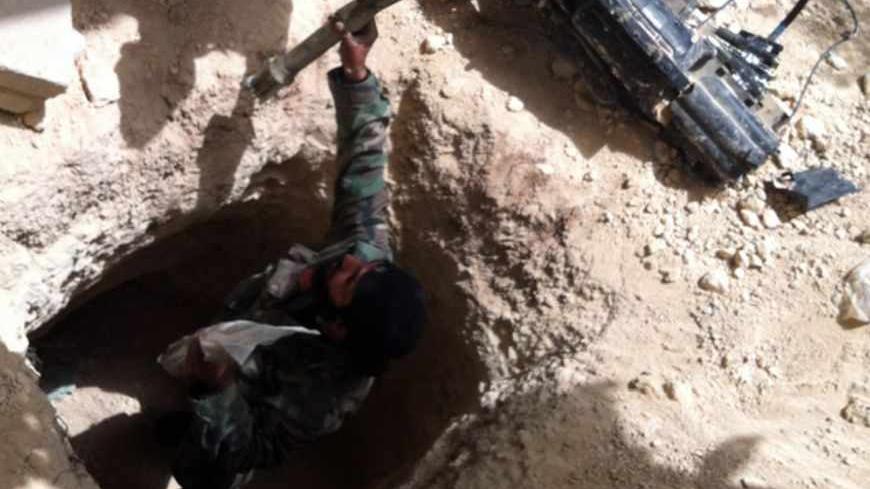 A picture taken on June 8, 2013, shows Syrian army soldiers gathering ammunition from a tunnel in the village of Bouaida, north of Qusair, in Syria's central Homs province. - AFP/Getty Images

The "War of Tunnels" is probably the most suitable name for the war fought in Syria's strategic region of Qusair, on the border with Lebanon. In each city, town and village, dozens of hideouts and underground routes have been found by the Syrian army and Hezbollah fighters.

"These tunnels were used to connect alleys with each other, exit routes and hideouts, snipers' shooting posts and weapons storage," Major Abdo, a Syrian army officer, told Al-Monitor. The tunnels were under almost every house and building. I entered one in one house, and at the end of it I found myself in the living room of an adjacent house. According to Abdo, "These tunnels took them a lot of time to plan, dig and connect."

Many of the fighters I met in the area spoke about the rebel snipers who used such tunnels to shoot at pro-regime fighters during the first days of the war.

"No one expected they'd use such a strategy. They'll wait for the fighters to get closer, then shoot them in the feet, and when the fighter kneels they'll finish him with a shot in the head," said Fidaa, a Hezbollah fighter who took part in the attack. He told me that in a day or two, it was clear: "One sniper was capable of stopping our advance for a day or two."

After the dramatic fall of Qusair and the rebels' retreat, there were expectations that a fierce battle would be fought for two towns around Qusair — Dabaa and Eastern Bouaida — but later on, the Syrian army entered them with no remarkable resistance. Everyone was asking: Where did the fighters go? The answer didn't take much time to appear.

In the open field between Dabaa and Eastern Bouaida, hundreds of vehicles were found, including motorcycles, cars and four-wheel-drive trucks with 23mm machine guns mounted on them — even a 57mm artillery gun. It was clear that the rebel fighters and their families had arrived at a point where they had to take only light weapons and sacrifice the rest. Al-Monitor was one of the first to arrive after the battle, and we had the chance to go around and try to understand how the fighters and accompanying civilians fled. Once again, the answer was tunnels.

Just meters away from the cars, several openings became visible in the ground. They were all at least four or five meters deep and connected to a huge network of water pipes built years ago by the government.

"These pipes connect the countryside of Qusair to the city of Homs, and areas in southeastern Homs province not very far from Damascus countryside," said Abdo, who added that the militants had found themselves in a hopeless situation with no other choice but to flee. Abdo added that he expects the fighters to reappear in the countryside of Damascus.

What's obvious is that most of the fighters who survived the fight in Qusair succeeded in getting out of the area, but we also saw that fighters in other towns and villages in the region left their bases for the fleeing points days before the army and Hezbollah entered.

Where will the next major conflict be, everyone is asking now; will it be Aleppo, or the countryside of Damascus? The regime is now back on the offensive, much more confident and firmly backed by its allies. As for the opposition, almost the opposite is true.