Qusair is a city in rubble. 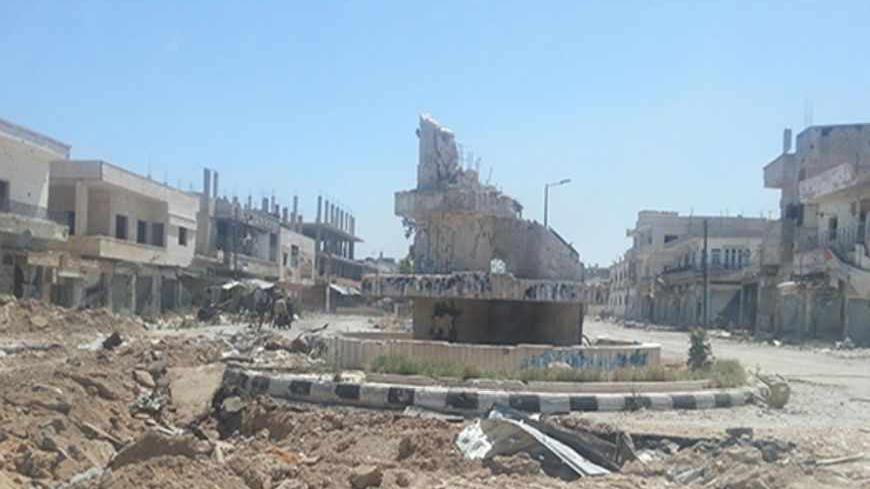 The center of the Syrian city of Qusair hours after it was captured by government forces on June 6, 2013. - Ali Hashem

QUSAIR, Syria — A city that lies in rubble, where ghosts and soldiers share the deserted streets and where dead bodies lie. Qusair, the Stalingrad of Syria, the revolution's fallen icon and the regime's turning point. From north to south, east to west, it is obvious that the city is under the regime's full control. Soldiers can be seen everywhere doing all that comes to mind: cleaning, searching, eating, singing, blazing and looting. Nothing here indicates that life will go back to normal soon; there is no sign of civilians except a few dozen who returned to check on their homes and some civil workers who were sent to the city to inspect its needs 24 hours after its fall.

Indeed, there is no sign of civilians — those tens of thousands who used to live in the city, according to official records. In fact, it is now obvious that there were only a small number of civilians in Qusair — those were close relatives to opposition fighters, who fled with them the day the city fell.

In the city center a large clock is still standing; this is ironic as it seems that the "clock" wants to tell people that the history of nations never falls. A few meters away a church can be seen — a sad church that not only lost its worshippers but had its statue of the Holy Mary uprooted and hymnbooks scattered on the ground.

The entire scene I'm witnessing is dramatic; still, the main question remains: How did Qusair fall?

Led by Hezbollah and the Syrian army, the battle for the city lasted 15 consecutive days. From the first day, it was clear that the fight was not going to be easy and those fighting to defend the city were up to the challenge. Hezbollah lost more than 30 fighters in the first attack, finding itself faced with a counterpart with a similar warring mentality.

"This kind of battle needs different tactics, something totally new," said Alaa, a 24-year-old Hezbollah officer whom I met in the city. "We first attacked the city center, then we focused on blocking all the supply routes."

The plan was to take control of the surrounding towns and villages while fighting in the streets of Qusair, "We took Haydariya, Hamidiya, Dabaa Airport and Arjoon, while pushing in the town from street to street until we had full control of the town hall," Alaa said, adding, "Rebel snipers made things worse and delayed the fall of the city."

Sources in Qusair insist there were efforts to hand over the city and save it from the final assault. Lebanese journalist Mohammad Sahili revealed, "An agreement was about to be reached with Free Syrian Army Aleppo Cmdr. Abdul Salam al-Okeidy, but things changed at the last minute." According to Sahili, "The rebels were divided over the plan," and time was passing quickly.

The attack started abruptly and came from three sides, preceded by heavy artillery and rocket bombings. "There were so many shells that some hit one another," said an activist who fled Qusair to neighboring Dabaa.

"We turned a blind eye to provide an exit for the armed opposition and their families toward the village of Dabaa," said Alaa who lost four of his group members during the attack on Qusair. He elaborated, "We knew they'd leave if they had the chance and they didn't miss it; the attack started at 4 a.m. and by 6 a.m. it was over."

Later on Thursday [June 6], the same plan that was implemented in Qusair was used in Dabaa. Within hours, the village came under control of the regime and the rebels once again fled with not many more options available.