Nasrallah on Syria: 'This Battle Is Ours' 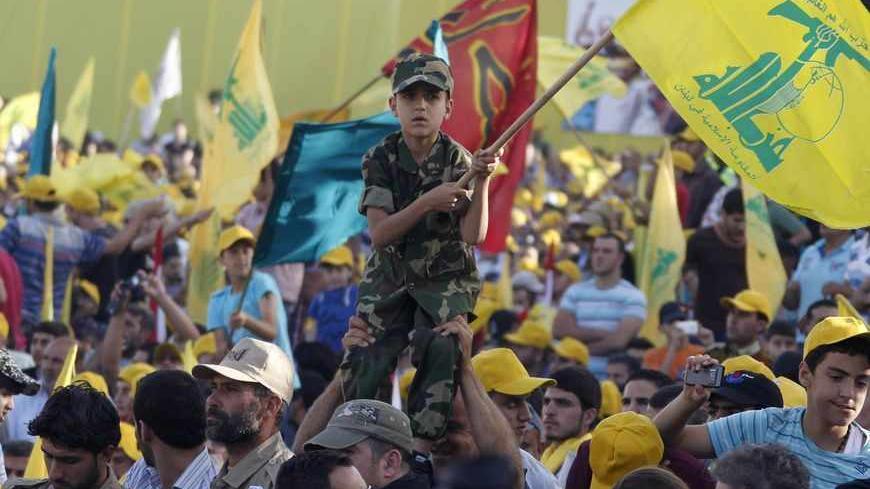 A boy wearing an army fatigues is held by people as they watch Lebanon's Hezbollah leader Hassan Nasrallah as he appears on a screen during a live broadcast to speak to his supporters at an event marking Resistance and Liberation Day, in the Bekaa Valley, May 25, 2013. - REUTERS/Sharif Karim

This Sunday [May 26] in Beirut’s southern suburb, Hezbollah’s stronghold, wasn’t like any other Sunday. Less than 24 hours after the group’s leader Hassan Nasrallah announced it's officially their war in Syria, two Katyusha rockets landed in the area, wounding five Syrian nationals working there. It’s only the beginning, many here admit, “We are behind Hezbollah ... Katyushas won’t scare us,” said a man who lives a few meters away from where the rocket hit.

Lebanese authorities said three rockets were launched from Mount Lebanon, two landed in the capital’s southern suburb and the third just a few meters from the launching site.

It’s a turning point in the war, just as Nasrallah’s speech was on Saturday [May 25]. Both Syria and Lebanon are ridding themselves of what used to be borders and uniting themselves under the flag of war.

"We will continue along the road, bear the responsibilities and the sacrifices. This battle is ours, and I promise you victory," said Nasrallah, who was addressing thousands of his supporters in the Liberation Day ceremony, the 13th anniversary of Israel’s unconditional withdrawal from south Lebanon. Nasrallah said his war is with the extremists, “takfiris” as he named them. "What future do you expect in Lebanon, Syria and Palestine with the presence of these takfiris?”

The speech was a mixture of morale boost to Hezbollah supporters and threats to his enemies, though it was clear Nasrallah wanted to say that not all the Syrian opposition are his enemies, “We don’t accuse everyone in the opposition of having foreign ties. Some have logic, a vision, rightful demands, and they are ready to hold a dialogue. That’s their natural right.”

Once again, Hezbollah’s chief explained how his party’s role in Syria evolved. "Since the beginning of Syria's war we have said that [President Bashar al-]Assad's regime has its merits and demerits. Reform is required and the only way to reach this is through political dialogue," he said, adding: "I have contacted Assad and members of the opposition to reach a settlement. Assad accepted the suggestion whereas the opposition rejected it."

As for some it was clear that Nasrallah’s speech was Hezbollah’s declaration of war on al-Qaeda directly. Nasrallah mentioned the “Islamic state of Iraq” and linked it to the radical groups in Syria, accusing it and the Taliban of committing crimes in Syria, Iraq and Pakistan. He took time to explain the “takfiri” mentality to his supporters. "takfiri groups' control over Syria and especially in border areas with Lebanon poses a great danger on Lebanese Muslims as well as Christians," he said. "Syria is the resistance's main supporter and the resistance cannot stand still and let takfiris break its backbone; we believe our action to be a defense of Lebanon, Palestine and Syria."

Nasrallah warned, "If Syria falls in the hands of the takfiris and the United States, the resistance will be trapped and Israel will enter Lebanon. If Syria falls, the Palestinian cause will be lost."

It wasn’t only the Syrian crisis that Nasrallah tackled in his speech.

He spoke about the situation in Lebanon and how it is linked to Syria calling on Lebanese factions not to bring the Syrian war to Lebanon, and rather go and fight in Syria on the side they want to back. “You can take any side you want,” Nasrallah added, “however, Hezbollah cannot be on the side of the United States or Israel or people who dig the graves and open the chests and behead other people.”

Many things were new in Nasrallah’s speech, but the unprecedented thing was his full attack on the Lebanese state, not the government. It is thought that Nasrallah was responding to President Michel Suleiman’s criticism of Hezbollah’s meddling in Syria. “The main strategic problem is that Lebanon as a state sees not in Israel a real enemy,” said Nasrallah, asking, "Israel has been preparing for war and resolving gaps since 2006. What have we, in Lebanon, done to prepare for any possible aggression by Israel? Who is responsible? In Lebanon, there are no shelters, no safe accommodations. Is the resistance also entitled to take care of the civil needs?"

After the May 25 speech it is clear that Hezbollah is now fighting full force on two fronts, one with Israel, the other with the Syrian rebels.

On both fronts, Hezbollah raised the stakes, and Nasrallah promised that his party will prevail.

What is obvious is that a bloody future for the whole region is ahead.