Responding to the Aug. 15. bombing of a Hezbollah neighborhood in Beirut, which killed 22 people, Hezbollah leader Hassan Nasrallah threatened to escalate the war with the "takfiris" in Syria. 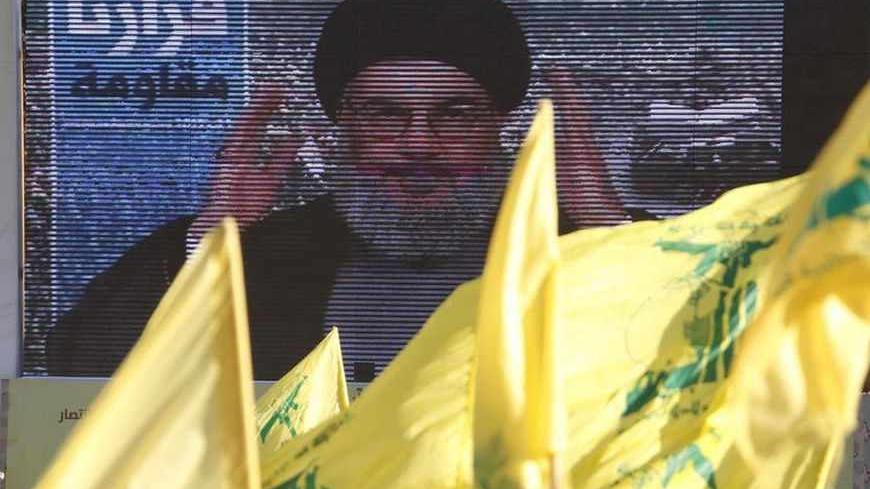 Hezbollah Secretary-General Hassan Nasrallah addresses his supporters via a screen during a rally on the seventh anniversary of the end of Hezbollah's 2006 war with Israel, in Aita al-Shaab village in southern Lebanon, Aug. 16, 2013. - REUTERS/Ali Hashisho

The hot breeze of an expected war between Hezbollah and al-Qaeda is hitting the region. This is not news to many, with both groups losing fighters on a daily basis in Syria, where merciless battles are being fought. The news is that this war will no longer be kept within Syrian borders, rather, it’ll take place wherever both groups have a presence. The Thursday, Aug. 15, bombing in Beirut’s southern suburb, Dahiyeh, Hezbollah’s stronghold, is a clear example of what’s on the way.

Carnage in Dahiyeh meant that Hezbollah chief Hassan Nasrallah’s planned speech on Friday, Aug. 16, had to be changed. Just a few hundred meters from the southern borders, Nasrallah’s commemoration of the seventhth anniversary of the 2006 war with Israel was transformed due to the previous day’s bombing into a sizzling speech that opened fire on both Israel and al-Qaeda.

"Targeting Dahiyeh and the supporters of the resistance is not something new," said Nasrallah angrily, adding, "The goal of the explosion was to kill civilians, it did not target a certain Hezbollah official, center or institution.

Nasrallah suggested there were two theories for the explosion. The first points the finger at Israel and the second at takfiri groups. He added, “But there is a third hypothesis which stipulates that another group has interfered to escalate tension with Israel and to provoke internal strife."

Here, Nasrallah looked as if he was trying to keep Israel on the suspect list, even if he was almost 100% sure it was the second option. "One member of the group responsible for the explosion in Hermel's Majdal Anjar was arrested, and he revealed the names of the other members of the group and those who manage and finance them are very well known,” he revealed.

Hezbollah’s chief then directly accused al-Qaeda-affiliated groups of the bombings. "These groups target Sunnis, Shiites and Christians," he said. "They send suicide attackers to Sunni mosques and to churches also. If these attacks continue, Lebanon will be on the brink."

This was Nasrallah’s most serious remark in his one-hour speech, for it included a hidden warning that neither he nor his group will be capable of controlling their popular base if things continued this way. The warning was directed to the government and to political factions, mainly those on the opposite side. "You must prevent dragging Lebanon into a civil war and stop sectarian incitement. The conflict should remain politically-oriented and should not become sectarian," he said.

Nasrallah differentiated between those who perpetrated the attack and Sunni Muslims as a group, saying, “Those behind the attacks are not Sunnis, those people are takfiris who have no religion and are murderers.” He called on the people, especially those who were affected by the explosion, to refrain from emotional and uncalculated reactions.

Nasrallah then chose to address the groups he accused of being behind the attack. "If you are punishing Hezbollah for its role in Syria, I will tell you, if we want to respond to the Dahiyeh explosion, we would double the number of fighters in Syria — if they were 1,000 to 2,000, and if they were 5,000, they would become 10,000. If one day came, and required that Hezbollah and I go to Syria, we will do so."

This last sentence meant clearly that Hezbollah’s decision to fight in Syria is a long-term strategy and that whatever the situation is today, it’s heaven compared with what the region, Syria and Lebanon are to expect.

Ali Hashem is an Arab journalist who is serving as Al-Mayadeen news network's chief correspondent. Until March 2012, Ali was Al-Jazeera's war correspondent, and prior to Al-Jazeera he was a senior journalist at the BBC. Ali wrote for several Arab newspapers, including the Lebanese daily As-Safir, Egyptian dailies Al-Masry Al-Youm and Al-Dostor, the Jordanian daily Al-Ghad, and also contributed to The Guardian.