Hezbollah Secretary-General Hassan Nasrallah speaks on Syria and the region. 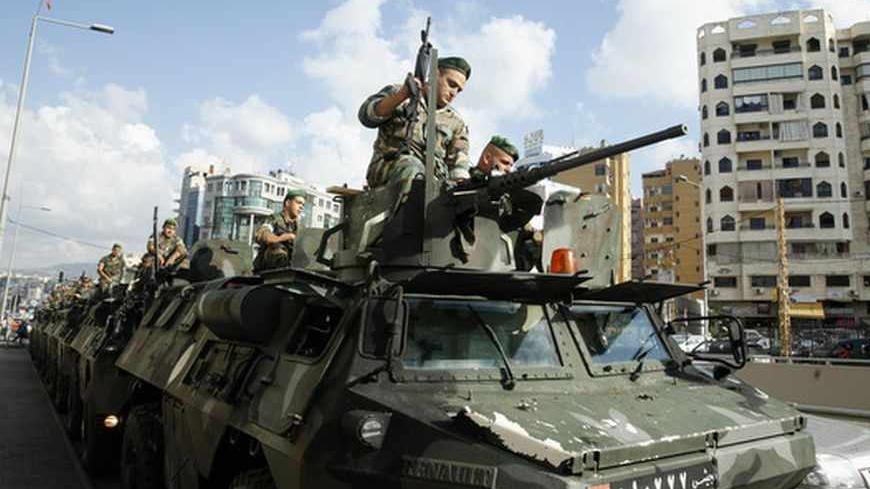 Lebanese security personnel deploy in the southern suburbs of Beirut, part of a move to take over the checkpoints set up by Hezbollah after August car bombings targeted the area, Sept. 23, 2013. - REUTERS/Sharif Karim

Lebanon, Syria, Bahrain, and Saudi Arabia, were all in one man’s speech, Hezbollah’s Secretary-General Hassan Nasrallah. The main reason behind Nasrallah’s televised appearance on Monday was the deployment of Lebanese security forces in large numbers inside Beirut’s southern suburb, famous as Hezbollah’s stronghold. The forces, composed of army, police and general security personnel, will take responsibility of the checkpoints on the entrances and inside “Dahiyeh.”

“Hezbollah greatly welcomes this move,” said Nasrallah, “We hope the state can always fulfill its legal and national duties in all cities, towns and governorates in Lebanon.”

But the speech wasn’t all about security forces’ deployment, though he used it as a launchpad to address other subjects that were linked together in one way or another. The deployment in Dahiyeh was linked to the Aug. 19 bombings that Nasrallah accused in his speech a group affiliated with the rebels in Syria of perpetuating it, so Syria was also there. Nasrallah also attacked Saudi Arabia and other Arab countries for their role in Syria, and since Saudi Arabia is also present in the Bahraini conflict, he took the chance to send some firm messages to the government of Manama.

“Nasrallah wanted to send some messages together, he was very relaxed and that was reflected in the low tone he used,” a source in Beirut told me by phone. According to the source, Hezbollah's secretary-general has kept away from media appearances for almost a month: “During the standoff on Syria the group decided there should be no word on the possible response, it was part of the psychological warfare. Ambiguity made the Americans think of hundreds of probabilities.”

Nasrallah denied claims that his party had acquired chemical weapons from the Syrians, describing the accusation as ”truly laughable,” emphasizing that his followers “understand the dimensions and background of these accusations, and these have dangerous consequences for Lebanon,” denying “decisively and conclusively these accusations which have absolutely no basis in truth."

Al-Monitor’s source revealed that Hezbollah was studying the situation and the accusation and felt it was important to deny it openly “because some parties might try to manipulate the silence and use it as a proof to their allegations.” The source explained that Hezbollah regards as “haram” all types of chemical, biological, and nuclear weapons, “this is the ‘fatwa’ and they are a religious group, so they have to adhere regardless of any different point of view.”

Nasrallah’s comments on Syria involved the US threats, criticizing some Lebanese politicians who called on US President Barack Obama to strike Syria. Nasrallah was mainly aiming at former Lebanese PM Fuad Siniora, who wrote an article urging Obama to increase his pressure on Assad’s regime. “Siniora is a long time political foe of Hezbollah, he accused them of committing crimes in Syria, so it’s maybe their opportunity to tell him 'people who live in glass houses shouldn't throw stones.'"

Nasrallah gave his words on Syria a regional impact. He warned Turkey of a fate similar to Pakistan, called on Arab countries, mainly Saudi Arabia, to stop saying that Hezbollah is occupying Syria. “A lot of Gulf countries, especially Saudi Arabia, are saying that Syria is occupied by Hezbollah and the Iranian Revolutionary Guards, then they say that should be a resistance inside Syria to expel the occupiers. Saudi and Gulf countries don't want any occupiers in Syria, they only go further to call the whole world to occupy Syria.”

Our source tells us that Hezbollah took the decision months ago to get rid of diplomacy with regional countries that are dealing with them in a hostile way: “They believe Saudi Arabia is playing a bad role not only against Hezbollah in the region, but against the whole region.” The source elaborated, “Since the return of Bandar Bin Sultan the whole region is getting bloodier, this is what some in Hezbollah believe, and they tend to think Bandar is behind the bombings in the whole region, from Syria to Pakistan and from Lebanon to Iraq.”

Still, Nasrallah decided to call on the countries he accuses of interfering in Syria to think in a different way, “This is a sincere call to Saudi, Turkey, Qatar and Gulf countries especially to reconsider their positions. If you think you will win militarily, you are wrong, you will fail. Think about the safety of the people in this region. Whoever declines calls for political solutions in Syria has Syrian blood on his hands.”

“Nasrallah believes that some of the Syrian opposition groups are highly influenced by the Gulf states,” said our source. ”From his point of view these groups will never go to a solution with the blessings of their backers, so he wanted to address [those] whom he regards as the decision makers.”

It wasn’t only Syria in the region that Nasrallah mentioned; he recalled the revolution in Bahrain, mocked the government there that designated Hezbollah as a terrorist group, “The GCU now have a terror list, and now it’s calling Hezbollah a terrorist organization. Let’s see if they’re going to add Israel to the list.”

Hezbollah’s chief criticized those who claim to support other revolutions, but when it comes to Bahrain they ignore the uprising. “Nasrallah was trying to tell the Gulf that Bahrain exists in the heart of Hezbollah,” said our source, adding, “Despite the fact its government designates the group as a terrorist organization, he wanted to send a message to the Saudis and its allies that the continuity of war in Syria might lead to unexpected consequences in much closer areas from their borders."