In an exclusive interview with Ali Hashem, the widow of slain Tunisian opposition politician Chokri Belaid holds the Tunisian government "politically accountable" for his murder. 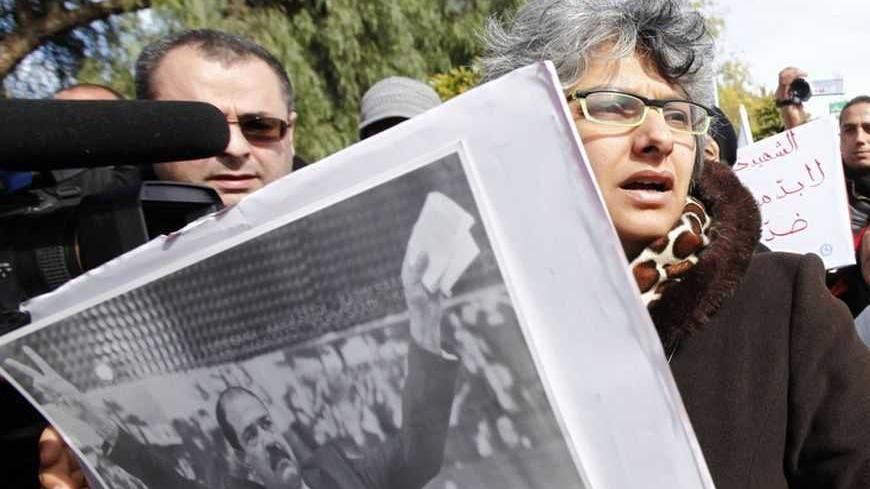 Basma Belaid, the widow of assassinated leftist politician Chokri Belaid, carries a poster of her husband as she is surrounded by reporters during a demonstration next to the National Constituent Assembly in Tunis, Feb. 11, 2013. - REUTERS/Anis Mili

TUNIS, Tunisia — A monotone black dominates the scene at Chokri Belaid's humble flat in Tunis. Only two white elements exist here, his wife's hair and a picture of them together when he was the groom and she was the bride. Five bullets were enough to claim the Tunisian opposition figure's life and turn his wife, Basma Khalfaoui, to a widow.

She browses the pictures. Here Belaid is posing in front of the statue of Iraq's former dictator, Saddam Hussein, in Baghdad, another photograph shows him at the university, one taken in Paris with him holding his newborn daughter, Neyrouz, to his chest. "This is our picture the day we got married," she explained as she showed me the rest of the pictures, the invaluable treasure left to her after the assassination of her husband.

"I can't accuse anyone of doing the crime, but still, [the] Ennahda ruling coalition holds the responsibility. Let's say for now they are politically accountable," the lady said as she held back her tears from falling. Khalfaoui said her husband received several threats days before his death. "Chokri received many threat messages on his mobile, he took some measures; still, he was killed," she added. "Political assassination is something new in our country, there are only few precedents," she said. "Many came to the streets after Chokri's death to say no to political assassination."

"Ennahda's leader, Rachid Ghannouchi, threatened [that] he is taking us to court," she told me. "When some accused his movement, he didn’t trouble himself to deny [it]. This mentality is destroying the country, but we are going to the end with our request to uncover the truth. We are going to the end."

She took me through the day when her husband was killed. "We woke up and Chokri went to work at 8 a.m. I was then preparing the girls to go to school, then I heard two gunshots, I wasn't sure they were gunshots, I thought maybe [it was] a stone. I rushed to the balcony, where I saw his driver crying and calling my name." She paused a bit, then added, "I found myself downstairs with Chokri's face covered with blood. I went with him into the ambulance, he was still alive but unconscious, [but] when we arrived in the hospital he was on the doorstep of death."

Basma, the word in Arabic for smile, preceded her words with a sad smile. "I lost him, his daughters too, but Tunisia gained a new icon."

Here, she is called by many "The Iron Lady" for the resilience and steadfastness she showed upon her husband's tragic death, during his funeral, and till this moment.

Posters of the late Belaid are everywhere in Tunis, his death is the talk of the town. Politicians here might have divided on several issues, but they all agree that violence shouldn’t be part of the political dictionary here. Friends and foes, all seem to respect and regard Belaid as a noble man. Sheikh Abdelfattah Mourou, the vice president of Ennahda, told me that despite the clear differences with Belaid he was shocked to hear the news of his death. "No one can accuse Ennahda of killing him," he said. "We are against violence and those who are throwing [at] us with such stones are exploiting the crime and using the man's blood to gain in politics." Mourou added, "He was a friend of mine, and his death pained me as much as it pained his family and friends."

Mourou, who is known to be a moderate cleric within Ennahda movement, said he supports Prime Minister Hamadi Jebali's initiative that calls for dissolving the cabinet and forming a government of technocrats. The initiative followed days of demonstrations by activists who held the government responsible for the assassination. Jebali himself is Ennahda's secretary general, his suggestion is faced by fierce opposition from his own party and welcomed by the opposition. He earlier warned: It's either his solution, or he will quit.

According to many, Belaid wasn't himself a popular leader. He didn't even make it in the elections. Hamza Balloumi was the last TV presenter to interview Belaid hours before he was shot. "Chokri said clearly in the interview that there are fears of political violence," Balloumi said. "I even dropped him at home after the interview and there he spoke about arms flocking into the country." Balloumi explained that many of those whom came to the streets might not be supporters of the slain politician: "Some of those who took part in his funeral were against him in politics, some even hated him, but we are a nation that opposes political assassinations."

Who killed Belaid? Everyone in Tunisia is asking and everyone wants to know. His wife believes he was killed because some feared his voice: "He threatened their existence; he was bold and courageous. They knew he wouldn't surrender even if he was left alone fighting." Ennahda's Vice President Abdulfatah Mourou said, "Those who killed this man are aiming at Tunisia as a nation, a revolution, and people. They might be from here or even foreigners; regardless, they knew what they did."

At Habib Burgeba's street in downtown Tunis, I met two university students, Amer Haji, a pro-Ennahda Islamist, and Yusef Shadli, a leftist and an anti-government activist. I insisted on meeting them together, given that late Chokri Belaid was originally a student leader and known for his struggle at the universities during the toppled regime's reign.

Yusuf, with his long hair in a traditional knit, holds the Islamists responsible for Belaid's blood: "Several mosque imams attacked him in Friday sermons; some even said he is a pagan." He added, while looking his colleague in the eye, "You are responsible for all the blood."

Amer didn't deny that there is part of the responsibility to be blamed on the Islamists and the government, but insisted, "We are all accountable, it's not only the Islamist. Days ago, two leftist figures said they wanted Ennahda leaders to be hanged, [and] many of Ennahda's headquarters were set ablaze." Both students continued to debate, each blaming it on the other. It was just another copy of the daily political clash taking place in Tunisia, a country that is famous for having another name, "Al-Khadra," the word in Arabic for green.

Green Tunisia is stained with red drops. Who will prevail, the green or the red?