Nafeesa Syeed reports on the political reactions and protests in response to the killing of opposition leader Chokri Belaid, head of the Democratic Patriots Party. [Updated Feb. 7] 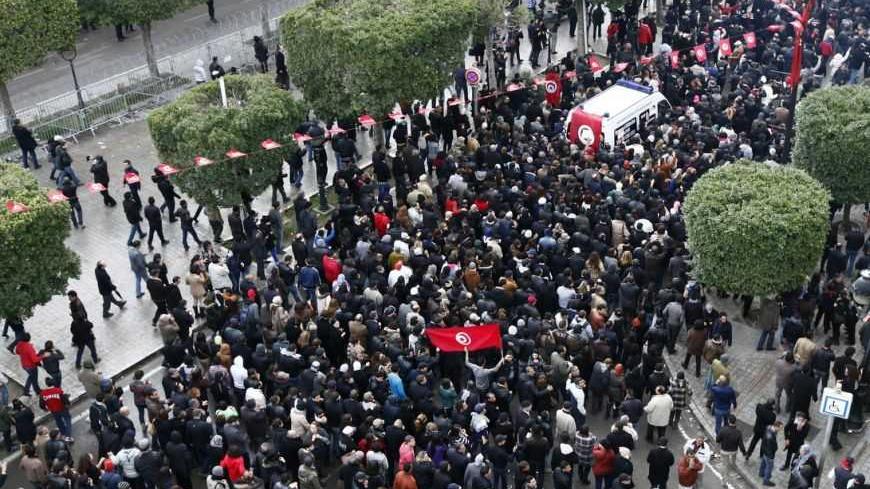 The body of Chokri Belaid (top right) arrives amid tens of thousands of protesters as they demonstrate on Avenue Habib Bourguiba in Tunis, Feb. 6, 2013. - REUTERS/Anis Mili

TUNIS, Tunisia — Outrage over the killing of a well-known opposition leader echoed across Tunisia's capital following what some are calling an unprecedented political assassination.

Chokri Belaid, a leftist and secularist who headed the Democratic Patriots party and openly criticized Ennahda, the ruling Islamist party, was gunned down outside his home early Wednesday, officials said. Two years after Tunisia's historic revolution, his death stunned the country's already-divided political landscape and populace as fingers pointed in divergent directions as to who was responsible.

On Thursday, Feb. 7, opposition newspapers ran their front pages in black, featuring images of Belaid and messages of mourning. Prime Minister Hamadi Jebali, a member of Ennahda, said he would dissolve the government and replace it with a cabinet of “technocrats,” but Ennahda leaders have rebuffed Jebali's plan.

Belaid's funeral is scheduled for Friday and UGTT, Tunisia's influential labor union, has said it will hold a general strike the same day, deeming the late leader a “martyr of freedom.”

Just hours after news first spread on Tunisian TV and radio stations of Belaid's demise, throngs of his supporters flocked outside the Interior Ministry in downtown Tunis. The scenes Wednesday, Feb. 6 were near flashbacks to the 2011 uprisings that brought down former President Zine El Abidine Ben Ali. Cafes and storefronts were shuttered but security forces were out. Women and men repeated chants made famous from the Arab Spring, including, "The people want the fall of the regime," and "Dégagé," imploring in French for the government to leave, while swaying their hands in the air. Youth gripped red flags representing the Popular Front, Belaid's opposition alliance, as well as photos of the slain, mustached leader.

In the afternoon, a downpour dispersed some demonstrators, but then commotion broke out when authorities shot tear gas, sending the masses bolting. Some murmured to one another, shuwaya, shuwaya, "easy now, easy," as they darted into side streets. The vapors seared residents even a few blocks behind the ministry, which said a police officer died in the clashes.

In a statement, Jebali condemned the "political assassination," calling it a threat to the country's path toward democratic transition and assuring that measures would be taken to swiftly bring the perpetrators to justice. In a televised evening address, Jebali said the country is facing difficult times and called for unity.

The US Embassy in Tunisia said Belaid's murder was an "outrageous and cowardly act" and called for an investigation.

"Political violence has no place in Tunisia’s democratic transition," the embassy said in a statement.

According to Human Rights Watch, violent assaults on journalists, political activists and others have been occurring since the revolution but many cases are not investigated. The organization said Wednesday Belaid's killing comes during a series of political violence and assaults on individuals "apparently because of their political or cultural views."

Those committing the attacks appear to be motivated by an "Islamist agenda," the group said, noting that it has documented instances in which victims have reported incidents to police with no follow-up on the cases.

Smaller crowds gathered Thursday in central Tunis, as sounds of sirens tolled. An upped police presence was visible, with busloads of officers in riot gear positioned along the city's main drag. Friday's slated strike could shut down several sectors in a country whose economy is struggling.

The death of Belaid, a lawyer, also rocked other parts of Tunisia, where there were reports of similar protests. The question as to who is to blame for the shooting has preoccupied many. Some have accused Ennahda. Others say it's the work of religious extremists, specifically branches of Salafi groups which have gained a following and which some say Ennahda has been too accommodating toward. And yet, another view holds Ben Ali supporters to task.

Radwan Masmoudi, president of the Washington-based Center for the Study of Islam and Democracy, who is currently in Tunis, said he can't recall such a political assassination in Tunisia since perhaps shortly before its independence in 1956, when a union leader was murdered in a similar manner.

"This is very unusual and shocking to all Tunisians," said Masmoudi, who has been helping political parties and NGOs to build consensus around the transition.

He said Ennahda and the government would not have been behind the attack, because instigating such havoc would not be in its interest. Rather the assailants could be those who do not want the revolution or democracy to succeed, such as people tied to the old regime. Masmoudi also noted that the National Constituent Assembly was set to enact a new law that would exclude members of Ben Ali's party from the next elections.

"We have to appeal for calm ... and make sure that we don't overreact or don't fall into the trap of violence or counter violence," he said. "The future of the country is at stake."

After the initial news, youth activist Mehdi Barhoumi said he heard from friends and colleagues across party lines and political orientations expressing a unified shock around Belaid's assassination.

But Barhoumi, who is not affiliated with any party, said tensions between groups have been on the rise as politicians, parties and institutions have lost sight of people's needs, at a time when social and economic problems loom large.

"As an activist in Tunisia, I see that the political process is not taking the revolution's goal into consideration," he said.

Instead, he said political players are focused on their own agendas and ambitions. "Each political party and political tendency is more or less fighting to gain more political interests; there is no common issue that can bring people together.”

The prospect of a new government could be an opportunity for reconciliation, he said. "As Tunisians, we have potential for more consensus.”