Beji Caid Essebsi accused the Ennahda of hamstringing the country after the revolution, insisting that the ruling party's Islamist ideology prevents it from building broader consensus, writes Nafeesa Syeed. 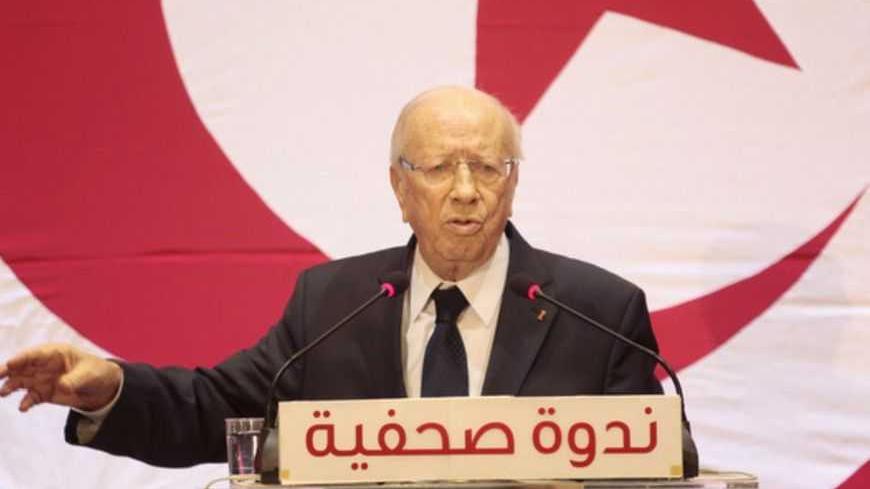 Nafeesa Syeed
@@NafeesaSyeed
March 29, 2013
TUNIS, Tunisia — A high-profile opposition leader in Tunisia accused the Ennahda on March 28 of hamstringing the country after the revolution, insisting that the ruling party's Islamist ideology prevents it from building broader consensus.


Beji Caid Essebsi, president of Nida Tounes, a secular political coalition, said when Ennahda won a "relative majority" in the October 2011 elections — which he called free and transparent — it didn't intend to govern the new order, but rather participate in the political process like other parties. However, emboldened by the National Constituent Assembly election results, Ennahda thought creating a coalition with two other parties would give it the ticket to rule, Essebsi said, while at a conference in Tunisia's capital, organized by Stanford University's Center on Democracy, Development and the Rule of Law.

Ennahda leaders rejected his criticism, which they said was not based on facts, but instead rooted in unsubstantiated claims. A figure in Tunisia's political scene since its independence, Essebsi occupies an intriguing, if not perplexing, space. In 2011, he served as prime minister in the months after the revolution. To some, he represents the dictatorial past, hardly the clean break from the previous repressive periods. Yet others credit his leadership in the country's initial path toward democracy and they now count on him to raise the secularist banner.

Tapping the scholarship of European intellectuals, Essebsi defined Islamism as a movement which considers Islam as a political ideology aiming for the Islamization of society and establishment of an Islamic state. Although Ennahda falls under that notion, Essebsi said, once it came to power, it attempted to build an alliance with secular and socialist parties.

"This was an unnatural coalition," he said, speaking through a translator.

He said Islamist governments cannot govern within a coalition. He cited Iran as an example where around the 1979 revolution, Islamist parties started out in coalition with others, but then purged the opposition until it became an Islamic state.

"We have a political party that wants to govern by itself," he said of Ennahda.

In the past, Essebsi said he considered Ennahda a moderate, centrist party. "I was wrong," he said. "It is really different from what I thought." Now he views it as an Islamist party that cannot cooperate with others and cannot accept different opinions.

With the coalition parties having "diametrically opposed" orientations, Essebsi said the constituent assembly has become stagnant while also overstepping its one-year term, as was originally set. It's failed to complete its tasks for the transition period, including finalizing the new constitution and holding elections, he said. Because the elected officials have "ignored deadlines," he suggested that the assembly be dissolved.

Instead of working toward democratic change, he said, the government became sidetracked by debates such as whether to implement Sharia as the basis for the constitution as well as whether to redefine the status of women compared with men as being "complementary" as opposed to equal. Essebsi thanked Ennahda leaders for ultimately not going through with those initiatives, but said with these distractions, the country hasn't been able to "make a single step forward."

In addition, he said that economic stresses, which helped spark the revolution, still endure. There are 700,000 people without jobs, and of those, 250,000 are university graduates. "On this, we have not moved forward," he said. Managing the country's resources properly and capitalizing on its geographic location, with access to markets on different continents, is essential, he said. If the government doesn't maintain its credibility abroad, it will be hard to attract investment.

"We can only survive if we're open to the rest of the world," he said. He also noted that security in Tunisia lies in the security situation in neighboring Libya, and Libya's security rests on Tunisia's conditions.

Essebsi's political involvement dates back decades. He served as an adviser to Habib Bourguiba, the country's first post-independence ruler, and held posts under former President Zine El Abidine Ben Ali, who was unseated in the revolutionary uprisings. Essebsi extolled Bourguiba for transforming Tunisia into a "modern state," expanding educational opportunities and liberating women.

"I am one of his disciples," he said of Bourguiba. He views the direction that the country is moving as counter to the Tunisia's legacy of the past 50 years of being a modern, moderate country, he said. In particular, he noted that a modern state doesn't mean a "secular state," citing that in Tunisia's constitution, Islam is identified as the country's religion and Arabic as its language. Tunisia is a Muslim country and has been that way for centuries, he said.

"I make a distinction between Islam and Islamism," he said.

He interpreted the former Prime Minister Hamadi Jebali's resignation in February, after he was unable to set up a technocratic government of experts, as a sign that Ennahda had failed. Jebali's attempt came after the assassination of opposition leader Chokri Belaid in February. Essebsi said the new government formed after Jebali's departure, also led by Ennahda, is essentially the same as the previous one.

Still, he said Ennahda members are not the enemy and they are part of the political landscape, but if they want to play a role, then the party must adopt a "culture of dialogue."

"We are not enemies, we just have different opinions," he said.

Meanwhile, Said Ferjani, a spokesman for Ennahda and member of its political bureau who was tortured in prison under Ben Ali's regime, dismissed Essebsi's characterization of his party.

"The Ennahda party refused to be labeled as 'Islamist' according to the Western connotation of Islamism," he said, adding that it has not called for the implementation of Sharia. "There is a sense of scare-mongering about Ennahda."

There are still remnants from the old regime latent in the political system, as seen in the bureaucracy and elsewhere, as officials appointed by the old regime remain, according to Ferjani. "We have a lack of democratic culture amongst many sections of the elite," he said.

He said "paternalism” — that is, insisting the government or process should be or ought to be a certain way; or perpetuating the notion of a "father figure" taking care of the country — must be avoided because it is derived from dictatorship. Dissolving the assembly is "calling for chaos," in a nascent democracy, he added.

The fact that Ennahda built a bloc with two other parties is a sign that it can create consensus among different people, Ferjani said. If Essebsi can't accept that as coming together, "how are you going to accept consensus among the diversity of Tunisians?" he asked. Ennahda knows "in its DNA" that it has to coexist with other parties.

In response to a question on women's rights, which some are afraid are being shafted because of Islamist inclinations, Ferjani said women played a big role in Ennahda's movement, even before the revolution and they believe women's rights are "intrinsic."

"But at the same time," he said, "whoever feels that he is threatened or there is something that you don't like it — this is a democracy, you have to express yourself."

Nafeesa Syeed is a freelance writer and editor based in Washington, D.C. She spent four years as a staff writer with The Associated Press, reporting on domestic and international news. From South Asia to North Africa, she has worked as an independent multimedia journalist for several publications. She is currently co-writing a book on Arab women entrepreneurs.