Young Tunisian independent activists are sitting out party politics and looking for other outlets of change. 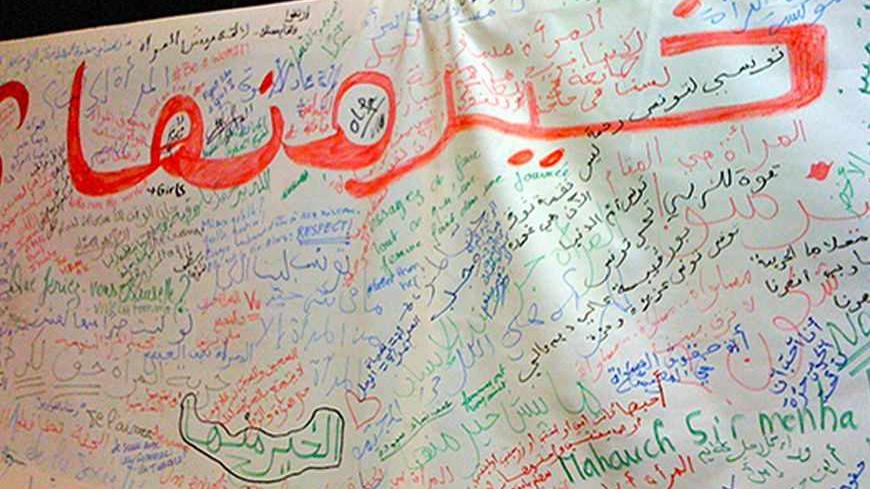 The slogan in red Arabic lettering, "Khair min ha?" ("Are you better than her?") is displayed at the center of this banner, created by civil society groups as part of a campaign to promote women's rights in Tunisia. Photo taken March 2013. - Nafeesa Syeed

TUNIS, Tunisia — Like many young people roused by Tunisia's revolution, international law student Soukaina Joumni dove into politics. After two decades of dictatorship, dozens of political parties emerged. Joumni joined the center-left Congress Party for the Republic, running as a candidate for the National Constituent Assembly in the October 2011 elections.

"In this period, many of the youth wanted to participate," the 31-year-old woman says. "They wanted to be a part of political life; they wanted to live this experience."

But two years later, many like Joumni have become disillusioned by a political landscape deeply polarized along ideological lines. They claim the parties are ineffective and politicians are more bent on clinging to power than adopting policies to move the country forward. This pack is searching for other outlets to express their zeal for civic engagement, but choosing to do so aloof of political affiliations. As independents, they insist their approach may be the country's best bet in building true dialogue during the transition period.

Despite losing the election, Joumni remained active in her party, known as CPR, serving in its media office and national council after it built a coalition government with Ennahda, the ruling Islamist party, and Ettakatol, another secular party. The CPR's Moncef Marzouki became the country's president.

Over time, she felt the party compromised on its principles as the focus became holding on to seats, rather than operating in the constituents' interest. Within the party, there were cleavages between members who supported Ennahda's policies and those who didn't. She said her party stood by as Ennahda failed to take measures for political prisoners and martyrs of the revolution and to purge the judiciary and other institutions of personalities from the government of toppled President Zine El Abidine Ben Ali.

"I believed that if I participated in a political party, I would contribute to changing the country … but unfortunately, I did not see that," she says.

In February, she resigned from CPR. "It was my decision that I would not participate afterward in any political party," she says. Nor does she plan to partake in elections slated to be held this year. Instead, she's interested in working with legal groups on anti-corruption and open government initiatives, the type of political action that doesn't require party membership.

The "beauty of being independent" is not being bound to one ideology, says Ghazoua Ouerghi, who's completing her master's degree in English and assists with various organizations, including a leadership development program for young women.

"Parties in Tunisia — they chain you," says Ouerghi, 25. "When you're in that party, you're committed to speak with the name of that party … and you don't really have the freedom to act or the freedom to say whatever you think."

Staying autonomous allows one to uphold the freedom of thought that wasn't allowed under the previous rulers, youth say.

Initial hope in politics immediately after the revolution has slumped, Brinci said, as unemployment escalates and job prospects remain scant, leading to distrust in politics.

"All young people want to work…they don't have jobs until now and the percent of poverty is very high," she says. "So how would you ask them to trust a political party?"

Some politically motivated youth find themselves in a tough spot when they don't buy into party politics, but want to exercise their newfound political rights. Nesrine Mansouri, 23, who's studying law and political science, says she, too, has been disappointed with how parties have fared since the postrevolution election. At the moment, she's not taking any sides.

"Right now, I'm not really convinced of any political party; it's hard for me to choose who to vote for," Mansouri says. "I don't want to miss the opportunity to vote and make a change, but at the same time, I don't want to vote for a party that I'm not convinced with."

For many, the way out has been getting involved with non-party political activism, social services and other non-governmental fronts — sectors that have also flourished thanks to the revolution.

Olfa Jelassi, 26, who hails from the historic city Kairouan, south of the capital, characterizes her work with the Tunisian Forum for Youth Empowerment and other groups in educating youngsters about the political process and engagement, as well as her efforts for environmentalism and women's rights and legal issues as political in nature. It's needed, she says, as the country transitions to democracy.

"If I really want to create this change in our society, I prefer to work with the civil society, not with the political parties," Jelassi says.

She prefers working directly with ordinary folks, as opposed to within the halls of government, in raising their consciousness about political issues in Tunisia. For instance, she cited a popular campaign to ensure women's rights are maintained in the new constitution. "We are very interested in what's happening politically."

However, activists note that they face some hurdles in convincing Tunisians of civil society work since such programs and endeavors are also new.

While some question whether common ground can be found among Islamists, secularists and Salafists in Tunisia, those steering clear of political affiliations say they're better equipped than parties to establish spaces for genuinely connecting individuals who possess differing stances.

"It's much easier to work with independent people, to debate anything; most of the time, people don't take it personally," says Sana Ouertani, a 24-year-old doctor who works with an NGO cultivating political awareness and gender equality and providing training in rural regions. "It doesn't end in an argument. We can find a conclusion. Even when we have different points of view, it's fine, but with people belonging to parties, we feel like they want to prove something — they want to prove their party is right or their point of view is a righteous one. So, it's much more difficult to work with them."

Having elected representatives isn't enough of a sign of progress since the revolution, Ouertani says. "We want things to change. We want to see the influence of the revolution in all fields of life, not just having a parliament of people debating all the time over things and not doing anything sufficient."

In addition, independents say they're more receptive to varying points of view.

"When you're part of a political party, I cannot change my mind, because that's what my political party officially adopts as an ideology," says Mansouri, the law and political science student. "So when you're independent, you can change your mind easily if someone convinces you and gives you the right arguments, you can say, 'Actually yes, you're right.'"

Mansouri helps run an organization for young jurists and law students that started a debating club to teach orators how to discuss ideas and not attack people in forums. "We noticed, really, a huge lack of communication and dialogue when it comes to political parties. They get personal. They get defensive."

Association with political parties has become so intertwined with individual identities that some become prejudiced toward others based on outward appearances. For instance, women who are political independents but don head scarves describe people instantly assuming they support Islamists. Meanwhile, some female independents who don't wear head scarves say they have been surprised by the open-mindedness of their hijab-clad peers, testing the limits of their own liberalism.

Nafeesa Syeed is a freelance writer and editor based in Washington, D.C. She spent four years as a staff writer with The Associated Press, reporting on domestic and international news. On Twitter: @NafeesaSyeed