At a public debate in Tunis, the challenges of governance for the Ennahda party were on display. 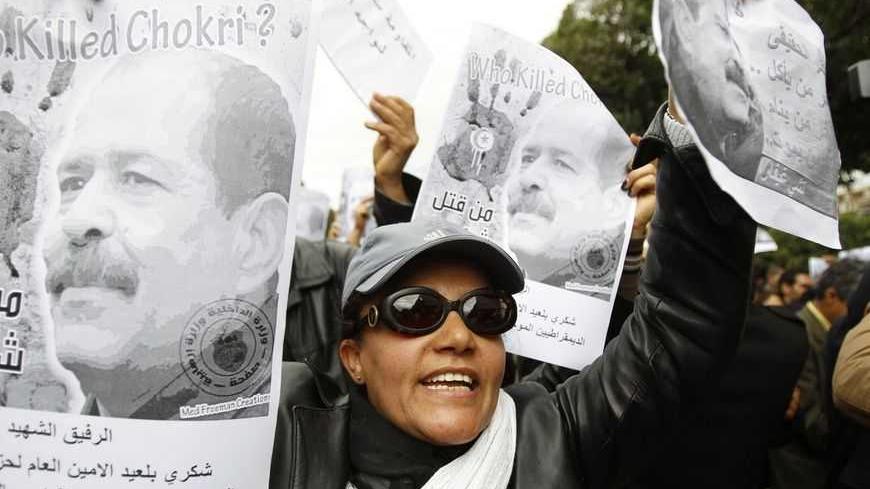 A woman chants slogans and holds pictures of assassinated leftist politician Chokri Belaid during a demonstration against the Islamist Ennahda movement in Tunis, Feb. 23, 2013. - REUTERS/Zoubeir Souissi

TUNIS, Tunisia — A month after the assassination of an opposition politician in Tunisia, a senior member of the ruling Ennahda party said Monday [March 4] their rivals' refusal to accept Islamists running the country is helping to stoke discord.

Amel Azzouz, a deputy in the National Constituent Assembly and member of Ennahda's Shura Council, said opposition forces have been "in shock" since her party gained control in Tunisia's first postrevolution elections in October 2011.

"They have not, unfortunately, accepted the results of the ballot box," Azzouz said. "They are not able to digest the results that an Islamist party" is in power. "These people have not accepted the present existence of this government."

Azzouz sparred with Noomane Fehri, a member of the Al-Joumhouri party and deputy in the Constituent Assembly, at a public forum in the New Arab Debates series being held across the region. The impassioned discourse served as a barometer for swelling tensions in a nation at a crossroads after the Feb. 6 murder of Chokri Belaid, a prominent opposition leader who headed the National Democratic Patriots party.

As authorities have made some arrests in Belaid's death, former Interior Minister Ali Larayedh was recently named prime minister after former Prime Minister Hamadi Jebali's resignation. Larayedh is charged with forming a new government as Tunisia drafts a new constitution and elections are due to be held this year.

Azzouz claims that Ennahda has been the victim of "very verbal violence" in the media and in the assembly, adding that 20 of the party's offices were burned in the aftermath of Belaid's killing.

"We've seen people mocking us and insulting us; we've seen people on TV asking for blood" against the party, she said. "Leading figures are asking to deport and export Islamists, altogether." She said if the opposition can "digest" that Islamists are governing they could be set on the path toward coexistence.

Critics have held Ennahda responsible for Belaid's death, saying the party has turned a blind eye to militias allegedly connected to Ennahda as well as armed Salafist groups carrying out attacks. Fehri said measures to crack down on such factions have been inadequate, noting that some arrestees are being released before going to trial. He stressed that on top of political violence, the overall security situation in Tunisia has regressed.

"All the trends are going the wrong way and all lights are flashing red," he said. "People feel much less safer this year than a year ago; weapons are everywhere…people don't go out in the evening anymore."

In addition, economic woes are worsening, Fehri said, with rising food prices, successive downgrading of the country's rating in financial indexes, and concerns that Tunisia won't be able to repay its debt.

Although both politicians called for collaboration, the gulf in perceptions of where the country is headed was evident when an audience member queried Azzouz: "Don't you think you're forging a new dictatorship?" She replied: "Prove it." Ennahda has maintained that it represents the "legitimate government" legally and fairly voted into office, reflecting the popular will, whereas opponents accuse the party of abusing power and targeting its detractors.

Moderator Tim Sebastian, a former BBC journalist, grilled both Fehri and Azzouz as to why they were still in office after assembly members had agreed to one-year terms that ended last November.

Medical student Hajer Boudriga traveled to Tunis from Sousse, a city about 90 miles south of the capital, just to attend the debate. In a brown headscarf, the bespectacled Boudriga said the event highlighted anxieties growing over the past two years, but on the ground, the split in society may not be quite as stark yet. However, she said there needs to be more exchange between political camps.

"There's no dialogue between the different parties," she said. "Indeed, everybody's thinking about themselves. We need to be collaborating more with each other."

Her friend, Mariam Sammouda, also wearing a headscarf, said she's not a member of any party, and has her qualms about Ennahda. "But today, I felt compassion to Ennahda," because most attendees were merely supporting whatever Fehri expressed, while pouncing on Azzouz. "I don't feel that they were acting like in a logical way."

Some individuals reiterated concerns about feeling less safe nowadays, with some going so far as to say violent flareups give the impression that the country is headed toward civil war.

Activist Ashraf Ayadi said government officials have tried to steer him away from advocating for certain causes, such as when he approached them about getting involved in the international campaign to abolish nuclear weapons. Ayadi said he was "harassed" and told not to attend meetings on such issues.

"Actually, to be honest, as a Tunisian activist, I feel very pessimistic about what's happening," he said. "These kind of debates are very important…we should have a dialogue."

Sonya Bahri, a design professor with long blond locks, said she doesn't belong to any party but is "totally against" Ennahda.

"Tunisia's position nowadays is really very confusing," Bahri said. "People are really boiling and everywhere you can see people talking and struggling, striking, having chats on the street."

To her, it's a sign of greater freedom of speech Tunisians are enjoying since the revolution, articulated through such meetings as well as a host of artistic mediums. Even though the trade of ideas can get heated and violent, including confrontations with police, she remains sanguine.

"I am really optimistic because it can't be any way else," she said. "If you look at the violence—it's something that happens, but it's not as big as all the good things that are happening."

A second debate is being held Tuesday with representatives from the same parties. Organizers say they called off operations in Tunisia last year after police removed a list of attendees from a previous debate, but the Interior Ministry ensured they could now “work freely and without interference.”

While some viewed the event as only a surface-level tackling of problems, the real debates may be the small ones that sprung up after the politicians' talks, when many with countering views collected in pockets across the hall.

"It's necessary to have these debates in all the Arab and Islamic countries," said Ahmed Chabi, a bearded mechanic, "in order to achieve constructive dialogue—we have enough political violence."