Rachid Ghannouchi, leader of Tunisia's ruling Ennahda party, insists that Islam and democracy can coexist and even thrive in his country, Nafeesa Syeed reports. 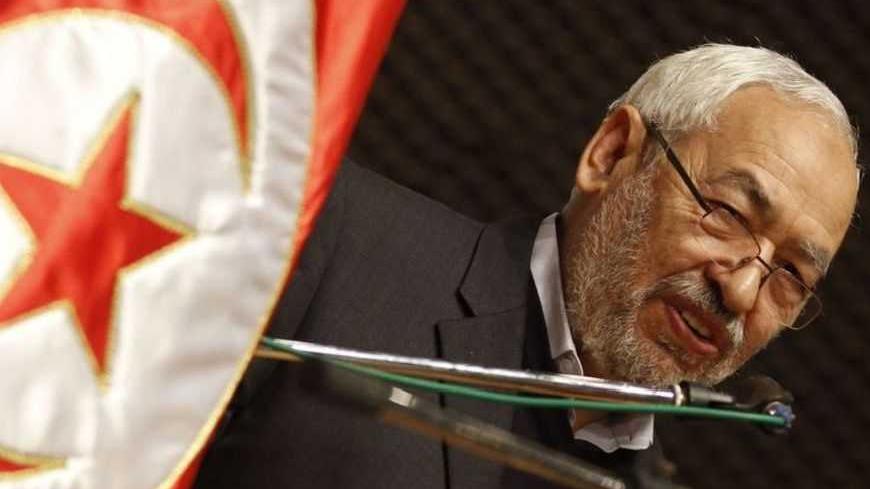 GAMMARTH, Tunisia — Tunisia's post-revolution experience has proven that Islam and democracy are not contradictory terms, and the country's democratic transition could serve as a model for other Arab Spring countries, according to the leader of the ruling Islamist party.

Rached Ghannouchi, president of the Ennahda movement, said Friday the October 2011 National Constituent Assembly elections demonstrated that Islamists were the most popular choice among the population. Even so, the party is working with others in the government to establish a model that will prevent the retreat to dictatorship, he said. The troika government, made up of what he called moderate secularist and moderate Islamist wings, has agreed on a number of principles and actions.

"Ennahda is not imposing anything on society," he said. "There is no contradiction between democracy and Islam."

Ghannouchi's commentary comes at a sensitive time in the country. In February, an opposition leader was assassinated and some laid blame on Ennahda for failing to keep armed groups under control, raising fears of political violence. Many in the opposition are particularly vexed by Ghannouchi, who is head of the party, but holds no official governmental post. His critics openly refer to him as a "dictator" and some intellectuals have even likened the present government to the Islamic Republic of Iran, where Islamists control the state institutions, but an unelected spiritual leader calls the shots from outside the government.

But for Ghannouchi, Ennahda's track record in power bears out otherwise. "In Tunisia, we proved this region can be democratic," he said, speaking through a translator at a conference sponsored by the US-based organization, the Center for the Study of Islam and Democracy. "Tunisia can be the leader of a landmark experience," a lesson that is important not only for the region and but even Europe and elsewhere.

Although there are some "Islamophobic" forces in the world today that stir angst against Islamist parties, the Tunisian government is protecting citizens' rights, including women's rights, he said. Islamists haven't prevented folks from swimming at Tunisia's abounding beaches, nor have they stopped women from choosing what to wear, as was the case under the previous regime, Ghannouchi said. (Under Ben Ali, women wearing headscarves faced harassment from authorities, though nowadays some women feel their liberal outfitting is under fire because of conservative religious views.)

"Freedom is no longer a slogan, but a reality that Tunisians enjoy," Ghannouchi said. "Now no one is monopolizing the public space."

He repudiated allegations that with Islamists being in power they have encouraged Salafist groups with more conservative and radical interpretations of Islam to thrive. Some Salafists and fundamentalists are raising "illogical arguments," but dialogue might be possible with "scientific Salafists," who might be strict in their understanding of the religion, but are not jihadist in nature. In cracking down on radical elements, the government can punish individuals responsible for crimes, but it can't become a police state and round up whole groups, he said. Steps in accordance with the law must be taken. In addition, he added that authorities are trying to reform state security services. Ben Ali's police and Interior Ministry forces were notorious for their surveillance of citizens and many still perceive them in a negative light, as seen after clashes during opposition demonstrations this year.

Ghannouchi noted that there has been ideological polarization in the country, saying it doesn't serve the aims of democracy. The conflict between secularists and Islamists is unnecessary and only further divides people, he said. While the party can't compromise when it comes to religious affairs, it can do so in politics and has made allowances, in spite of "pressures" and "plots" against Ennahda. For example, when Ennahda discussed whether shariah should be introduced into the constitution, he said they decided to refrain, as Tunisians had already agreed on the nation's identity as an Arab and Muslim country.

Attacks on the revolution have failed because of Tunisians' "good will," a continuation of the fact that the mass mobilizations in recent years were always peaceful, he said. Despite thousands of Ennahda members being killed and persecuted during Ben Ali's tenure, he said they have not sought retribution. "I think that the society made justice its principle," he said. "The Ennahda party, which has suffered over decades … didn't call for revenge." Instead, they are demanding accountability and transitional justice.

Although opponents are now calling for the "exclusion" of Ennahda, he said the party has not done so of others. There are many parties that would like to topple the government, he said, but that won't happen on the street, as though the revolution didn't even happen, as though the current government wasn't legitimately elected to power. Rather, toppling of the government can occur through political means, namely through elections.

Ghannouchi conceded that there are some "weaknesses" in this period, but still believes that Tunisia could prove to be a model for Arab Spring countries. "We are still striving to build institutions," he said. "We are working to create a new model" that doesn't allow dictatorship or monopoly of any actor to take root. "The success of the Tunisian experience will definitely make this process a success," he said of the regional revolutions.

Similarly, he said, in instituting a new constitution, he believes it should not be dominated by any single ideology and should be approved not by the minimum mark of 51 percent of the population, but by the overwhelming majority of society. The constituent assembly has yet to adopt the final version of the constitution.

Also speaking at the meeting, Ennahda member and current Prime MInister Ali Larayedh said one of the most tangible outcomes of the revolution has been extracting Tunisia from a "culture of fear," which previously reigned under the dictatorship. "Tunisians are no longer fearful," he said. Now freedom has become "enshrined" in society and "Tunisians are more free today." The government is keen not to reintroduce restrictions on freedom, he said.

That openness has empowered a more active civil society, which is working toward justice. "This is going to break the ice between the state and society" that earlier existed. "We are now working on a collective Tunisian consciousness."

Tunisians have to work on protecting the revolutionary process by building on the momentum of the uprisings. "This momentum should become a power that brings people together," he said. "This is what's going to immunize the Tunisian people from the emergence of dictatorship."

In his view, another testament to the democratic transition has been that different parties have held positions in the government. Before, he said, those in power wouldn't budge from their role unless "blood was shed." But democracy now allows for shift in power, ensuring a process that is free of corruption, he said..

Larayedh, who served as the interior minister before being appointed to his current post last month, mentioned that he is a "survivor of imprisonment" from Ben Ali's regime and that measures are being taken to remedy some of the ills of the past. Despite being broadsided by critics for being ineffective, he spoke optimistically.

"Tunisia is monitored by the whole world," he said. The "success of Tunisia will make people more confident in democracy" in this part of the world.

Ghannouchi, the Ennahda party leader, said this year Tunisia will reach the next phase in its transition, once the new constitution is ready and once elections will be held, though he didn't provide a date for the polls.

"We are about to crown this historic process of democratic transition in Tunisia," he said.

Nafeesa Syeed is a freelance writer and editor based in Washington, D.C. She spent four years as a staff writer with The Associated Press, reporting on domestic and international news. From South Asia to North Africa, she has worked as an independent multimedia journalist for several publications. She is currently co-writing a book on Arab women entrepreneurs.