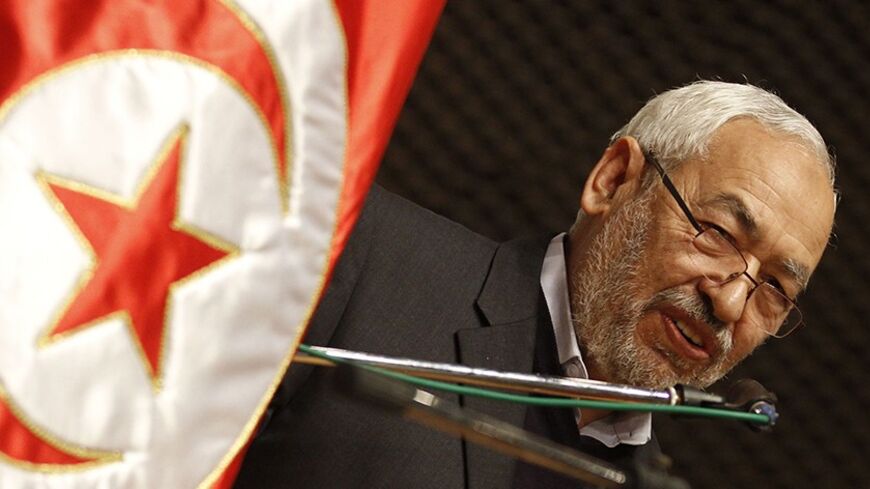 For a Washington eager to find a ray of hope within the post-Arab Spring’s gloom, the visit here this week of Rachid Ghannouchi, leader of the moderate Islamist Ennahda party of Tunisia, has been extremely welcome.

The avuncular Ghannouchi, in appearances at a half dozen Washington think tanks, has radiated optimism about Tunisia’s path toward democracy, based on consensus between the Islamist and secular elements of the political elite. In turn, he has been compared to an Arab “Mandela,” Vaclav Havel or even Thomas Jefferson, who could serve as a model and mediator elsewhere in the Middle East.

A new constitution endorsed by 200 of 217 members of parliament on Jan. 26 represents “a marriage between Islam and democracy, between Islam and human rights, between Islam and universal values,” Ghannouchi told a dinner in his honor on Feb. 25, sponsored by the Center for the Study of Islam and Democracy and the National Council on US-Arab Relations.

“We in Tunisia proved that the two trends [Islamism and secularism] can coexist and even establish a government,” he said.

When compared to the violence and instability in Libya, Egypt and especially Syria, Tunisia does indeed seem like a flower in a desert. But Ghannouchi himself said repeatedly, “One flower does not make a spring,” and he acknowledged that his country faces daunting economic and security challenges.

The US State Department has warned Americans of the risks of travel to Tunisia, where angry mobs burned the American school in Tunis on Sept. 14, 2012, and two prominent Tunisian secular politicians were assassinated in 2013. US diplomats posted in Tunis must go there unaccompanied by their families — another indication that the Barack Obama administration has serious concerns about the ability of Tunisia’s interim government to protect foreigners and suppress Islamic militants.

Tunisian President Moncef Marzouki has blamed the Syrian civil war and last summer’s coup in Egypt for reigniting al-Qaeda’s fortunes in the region. Ghannouchi said on Feb. 26 that extremists have gotten training and arms from Libya, where a weak state has failed to confiscate weapons from militias that overthrew Moammar Gadhafi.

Tunisia also faces a threat from fighters returning from Syria. Tunisian Minister of Interior Lotfi Ben Jeddou said on Feb. 24 that about 400 Tunisians have returned from fighting there and 8,000 have been blocked from leaving to join jihadists in Syria.

Asked by Al-Monitor about the security situation, Ghannouchi acknowledged that extremism is a threat and that police forces — which were reviled as an instrument of oppression under deposed dictator Zine El Abidine Ben Ali — are weak.

“It takes a long time to re-educate police to render them working for the national interest, not the security of the rulers,” he said. He said that the United States, Europe and Turkey were aiding Tunisia in reshaping its police and urged the Obama administration to lift its travel warning and “deal with Tunisia as a stable country. This travel warning harms Tunisia’s image,” he said. “How can investors and tourists go to Tunisia if there is this warning?”

David Ottaway, a senior scholar at the Woodrow Wilson International Center for Scholars, where Ghannouchi spoke on Feb. 26, told Al-Monitor that the Ennahda leader deserved credit for “forcing the party to make concessions in the constitution,” such as forgoing any explicit mention of Sharia. “He has played a very important role inside Ennahda because they have a lot of Salafists” in the party, Ottaway said. But when it comes to agreeing to crack down on Salafists, who are blamed for the assassination of the secular politicians, “he waited too long,” Ottaway said.

With its relatively small, homogeneous and well-educated population and its location just across the Mediterranean from Europe, Tunisia has major advantages over neighboring countries. Ghannouchi said economic growth has recovered from a negative 2% to a positive 3%, but that unemployment, while reduced from 19%, remains high at 15%.

Public dissatisfaction with Ennahda leadership and anger over the assassinations of Mohammed Brahmi and Chokri Belaid led support for the Islamist party to plummet last summer. A poll taken in August showed that only 28% of Tunisians had confidence in Ennahda and that two-thirds of Tunisians thought their country was headed in the wrong direction.

In September, however, Ennahda — which in October 2012 won Tunisia’s first free elections after the ouster of Ben Ali — agreed to resign and allow an independent caretaker government to run the country until new elections scheduled next fall.

Ghannouchi, in his Washington appearances, said repeatedly that even if Ennahda won the next election, it would not try to monopolize power but would insist on a coalition government. “In a normal democracy, you can rule with 51% of the vote but in a transition, that is not enough,” he said. Even 60% — if it represents only one trend — will not suffice, he said.

He expressed optimism that other Arab countries would eventually achieve democratic governance, even though the “price” countries such as Egypt and Libya would have to pay would be higher, he said. Ghannouchi said he was willing to try to mediate disputes between secular and Islamist factions elsewhere in the region. He said that the Palestinian secular movement Fatah had asked him to try to help it reconcile with the Islamist movement Hamas and that he would consider accepting “if we succeed in Tunisia.”

As for his own political ambitions, Ghannouchi, 72, who was arrested several times in the 1980s and spent more than two decades in exile in Europe, said he was content to remain an outside power broker and adviser.

“I will not add another employee to Tunisia because we have enough [government] employees,” he said.