Missteps have left Ennahda as unpopular in Tunisia as the Muslim Brotherhood is in Egypt. 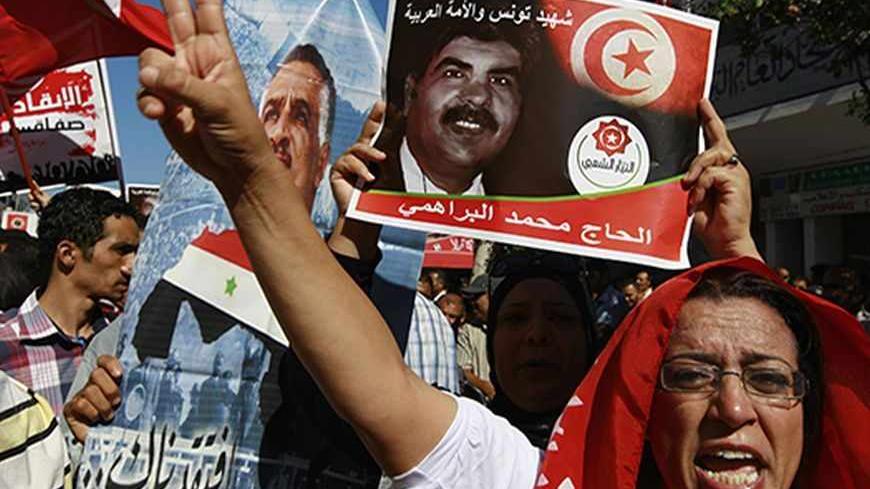 Protesters hold up a picture of slain opposition leader Mohammed Brahmi during an anti-government demonstration rallying for the dissolution of the Islamist-led government in Sfax, Sept. 26, 2013. - REUTERS/Anis Mili

The Sept. 28 agreement by Tunisia’s Islamist-led government to resign and allow the formation of an independent cabinet to oversee new elections reflects a sharp drop in popular support since the 2011 revolution.

According to new polling data made available to Al-Monitor, the moderate Islamist party Ennahda has the confidence of only 28% of Tunisians — the same meager support that Egypt’s Muslim Brotherhood had prior to this summer’s coup.

The poll, conducted Aug. 4-31 by Zogby Research Services among 3,031 Tunisians and due to be released publicly next week, also showed that two-thirds of Tunisians believe their country is moving in the wrong direction nearly three years after Tunisia became the first Arab state to overturn an autocratic regime through popular protests. Less than a third of those polled said the Ennahda-led government in power for the past two years had been effective in increasing employment, reducing the cost of living or protecting the civil and personal rights of the Tunisian people.

“I was struck by the degree to which Ennahda had exhausted support from every quarter but their own support base,” Jim Zogby, president of the Arab American Institute and managing director of Zogby Research Services, told Al-Monitor.

Tunisian support for their revolution was nearly universal after the downfall of President Zine El Abidine Ben Ali. The Zogby report noted that 94% of Tunisians were hopeful about the future in 2011 but only 39% are now.

A series of missteps has caused Ennahda’s decline since the party won the 2011 elections. While the Tunisian party formed a coalition with two secular parties as well as independents, it was faulted for trying to impose an Islamic agenda in a new constitution, coddling extremist Salafists and failing to address Tunisia’s economic woes.

The turning point came this summer with the assassination of opposition activist Mohammed Brahmi — four months after the murder of another opposition figure, Chokri Belaid. According to the Zogby poll, 96% of Tunisians said “insuring safety and security of all citizens” was important. Reducing the “high cost of living” was ranked second, with 94% giving it priority; 92% stressed increasing employment opportunities and the same percentage attached importance to finalizing a constitution that was supposed to have been completed a year ago.

Tunisian President Moncef Marzouki said last week that the Ansar al-Sharia extremist movement was responsible for the assassinations and blamed the war in Syria for reviving jihadist and al-Qaeda terrorism throughout the region. Marzouki, a secular human rights activist who returned in 2011 after two decades in exile, also said the new Egyptian government was making a serious mistake by outlawing the Muslim Brotherhood and that Tunisia would follow a different path.

Zogby noted that there are many differences between Egypt and Tunisia, with the military playing a far smaller role in Tunisia, where civil society is a much more important player. Indeed, the country’s labor-union movement is especially powerful and led the efforts to pressure the current government to resign.

“I don’t think the debate in Tunisia becomes as binary and polarized as in Egypt,” he said.

Still, Ennahda — whose leader, Rachid Ghannouchi, once told Zogby that the party hoped to become an accepted element in Tunisian political life like the Communist party is in Italy — clearly miscalculated. By agreeing to step down, it appears to have realized that the only way for it to remain relevant is by ceding power now.

According to the poll, no political figure in Tunisia enjoys majority support. The only leader who received 50% support was Hamadi Jebali. The current secretary-general of Ennahda, Jebali resigned as prime minister in February after the assassination of Belaid — an action, the Zogby report said, that may account for Jebali’s popularity. Ghannouchi himself is regarded as credible by only 27% of Tunisians while retired Gen. Rachid Ammar, who refused to fire on demonstrators during the revolution, is backed by 48%.

“The bottom line here is that the public’s dissatisfaction with the Ennahda government appears to have less to do with the party’s ideology and more to do with its heavy-handed approach to governance, its lack of effectiveness in meet­ing basic needs and its failure to achieve the goals of the Tunisian revolution,” the Zogby report said.

Zogby told Al-Monitor that Ennahda’s coalition partners — which have also experienced a drop in support — also hoped to “spare themselves further alienation by stepping aside now.”