A group of dogged lawyers pursuing evidence in the 2013 assassinations of two Tunisian politicians says it has uncovered new information that incriminates the Ennahda party, though Ennahda categorically denies involvement. 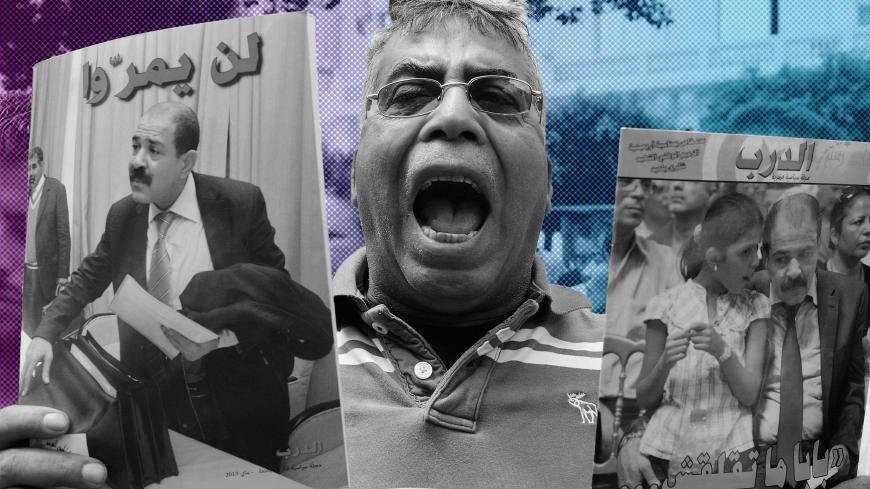 A protester shouts slogans as he holds portraits of assassinated Tunisian opposition leader Chokri Belaid during a demonstration against terrorism and violence in Tunis, Tunisia, May 30, 2014. - REUTERS/Anis Mili

TUNIS, Tunisia — Tunisia's main Islamist political party, Ennahda, is denying that information recently brought to light shows it was behind the 2013 assassinations of politicians Chokri Belaid and Mohamed Brahmi.

On Oct. 2, a group investigating the slayings said at a press conference in Tunis that it has voice recordings and new documents proving that members of a secret organization connected with Ennahda were not only involved in the assassinations, but also infiltrated state institutions to steal thousands of related documents from the Tunisian Ministry of Interior.

The group presenting the information is composed of lawyers who weren't satisfied with the initial investigation into the assassinations. The group, which calls itself the Committee for the Defense of Martyrs Chokri Belaid and Mohamed Brahmi, said it will demand that the judiciary examine the information.

Belaid — founder of the secular Popular Front party, which opposes Ennahda — was shot dead in front of his Tunis residence Feb. 6, 2013. Five months later, on July 25, Popular Front leader Brahmi was assassinated the same way. One person, Mustafa Khadr, was arrested in the case and police later killed another suspect, Kamel Gadhgadhi, in Rowad. Gadhgadhi was a senior member of Ansar al-Sharia, which was designated as a terrorist organization in August 2013.

Khadr is serving an eight-year jail sentence for being a leader of the secret organization. The defense committee for Belaid and Brahmi considers this sentence too light and believes there are several other security figures linked to Ennahda who were involved in the assassinations. These figures, the committee said, want the case to be closed without revealing the full truth.

The committee noted that not all documents implicating Khadr were handed over to the judiciary; the group said these documents could implicate others.

The committee also claimed that the secret group started a parallel security apparatus in the Ministry of Interior and engineered the assassinations, and alleged that this apparatus had a direct relationship with Ennahda leader Rashid Ghannouchi, among others in the party. The committee also said there are security leaders involved with Ennahda who are still hiding evidence.

Meanwhile, Al-Sabah newspaper on Oct. 3 published some of the committee's documents that appear to back these accusations, including a confession Khadr made during his 2013 interrogation and details about Ennahda’s alleged underground activities.

Rida al-Radawi, a member of the group investigating the murders, told Al-Monitor that after Ennahda won the largest percentage of seats in the 2011 parliamentary elections, the party appointed some of its close associates to the state’s official security apparatus, which has since enabled Ennahda to intervene in several sensitive cases, including the 2013 political assassinations.

Radawi claims Khadr still possesses the most important documents about the assassinations of Belaid and Brahmi. Between 2011 and his arrest in 2013, Khadr allegedly played a major role in illegally gathering intelligence information through the secret group, which also collected information about journalists and military personnel. Khadr also had connections with the banned Ansar al-Sharia organization, Radawi said.

According to the committee's report, the Ennahda-affiliated crew also tried to influence judges, cooperated with the outlawed Muslim Brotherhood in Egypt, surreptitiously obtained information about the Algerian military and tried to penetrate the US Embassy for espionage purposes.

Fatma Mseddi, a parliament member representing the secular political party Nidaa Tunis, called on the government to take serious action regarding the security concerns presented at the press conference. She told Al-Monitor that she wants the government to freeze Ennahda’s activity and form an open panel of judges, security experts and civil society activists to examine all the documents the investigating committee presented in public, and then refer that information to the judiciary.

“Ennahda must be dissolved because it doesn't respect the law of parties and associations in Tunisia, and it should be classified as a terrorist organization if its involvement in political assassinations and its association with the Brotherhood turn out to be true,” Mseddi said.

Parliamentarian Ziad al-Akhdar of the Popular Front party agreed with that assessment.

“The judiciary must assume its responsibility and consider the evidence presented by the defense more seriously,” he told Al-Monitor. “We in the Popular Front do not seek to eliminate Ennahda, but we want the law to take its course to achieve justice in the assassination of Belaid and Brahmi."

In an Oct. 3 statement, Ennahda described the accusations made by the defense as lies and slander. It said the Popular Front is trying to damage Ennahda's reputation and ruin Tunisia's foreign relations.

The statement added that Ennahda is an official political party and is committed to the party-regulating law it helped draft, which renounces violence. It further called on the Popular Front to adhere to the decisions and rulings of state institutions, especially the judiciary.

The head of Ennahda’s Shura Council, Abdelkarim Harouni, told privately owned Nessma TV on Oct. 2 that the Popular Front was using the judiciary to try to overthrow the movement by tying it to the assassinations. He said the Popular Front is using the accusations to gain power after failing to do so through democratic means.