Terrorist organizations in Tunisia have recruited policemen and soldiers within its ranks to obtain information on the security forces and use it in attacks, which has prompted the Tunisian authorities to fortify security agencies to abort infiltration attempts. 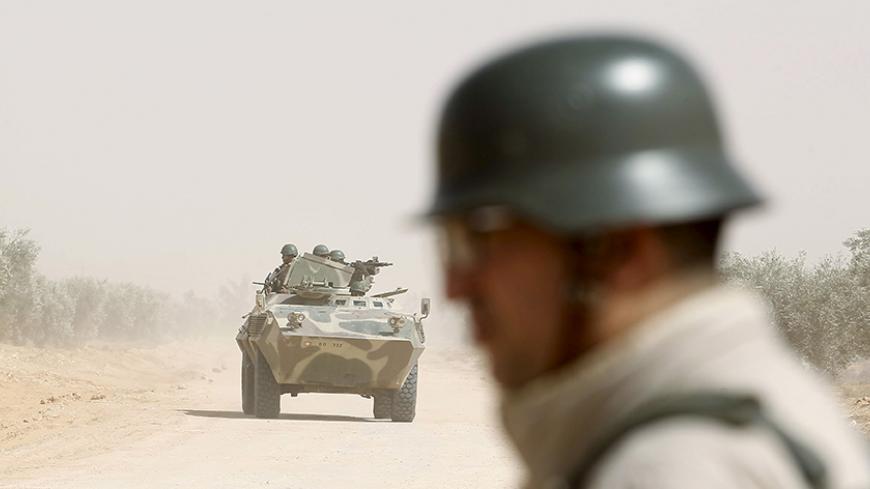 Soldiers patrol during a military operation to eliminate militants in a village some 50 kilometers (31 miles) from the town of Ben Guerdane, Tunisia, near the Libyan border, March 10, 2016. - REUTERS/Zoubeir Souissi

Online news site Akher Khabar reported June 27 that Tunisia’s Ministry of Defense had dismissed four soldiers on charges of religious extremism, saying it had “obtained documents showing their dismissal by the administrative court.”

It is not the first time that members of Tunisia’s security and military establishments have been dismissed on charges of religious extremism and collaboration with jihadi organizations active in the country. In September 2015, Tunisia’s Ministry of Interior dismissed 110 security members on suspicion of having ties with terrorist organizations. The ministry claimed that the suspects were affiliated with “various agencies, including the police, gendarmerie, army and customs.”

General Inspector of National Security Taoufik Bouaoun confirmed the incident in an interview with Tunisia’s MAD radio station on Sept. 14, 2015. He said, “Five or six of these [suspects] were referred to the judiciary for their direct collaboration with smuggling networks or some terrorist members.”

Bouaoun said that some of the suspects “have revealed to terrorists information on the security [forces'] patrols and positions in exchange for a bribe.”

The Interior Ministry’s announcement of the dismissal of a number of security members on charges of collaboration with jihadi groups ended the controversy of whether or not jihadis had indeed infiltrated the Tunisian security establishment. Confrontation with these groups had started in 2012, under the rule of the Islamic Ennahda movement.

Yet the military establishment seems more discreet regarding extremist members infiltrating the army. In July 2015, 33 youths disappeared from Remada, a city in the country’s far south, including three soldiers, one of whom was a pilot. After a US raid earlier this year on Sabratha in Libya, the youths were found in an Islamic State camp.

Jihadi organizations have focused their efforts on infiltrating security agencies rather than the army, given the important tasks of countering terrorism in Tunisia entrusted to these agencies. Moreover, the types of infiltration vary according to the nature of the organizations’ goals.

Some jihadi organizations, for instance, are involved in the recruitment of security agents at the border to facilitate the smuggling of their members into Libya and back, as happened with Ansar al-Sharia leader Saif Abdullah bin Hussein (Abu Ayad). In May 2014, the Tunisian authorities arrested a member of the border guard on charges of smuggling Abu Ayad to Libya.

Jihadi organizations also rely on recruited security members to leak reports on the investigations with their members detained in prison, as happened in 2013, when reports of the investigation into the assassination of opposition members Chokri Belaid and Mohamed Brahmi were leaked. The general prosecutor in Tunisia opened an investigation at the time, after investigation reports fell into the hands of Ansar al-Sharia.

According to Bouaoun, these organizations rely also on the security members they recruit to inform them of the movements of the security forces and police patrols and positions used in attacks against the jihadi organizationsm.

The methods used by jihadi organizations to recruit soldiers and policemen include ideological polarization, bribery and kinship.

The infiltrations were revealed following Zine El Abidine Ben Ali’s fall in 2011, as the jihadi Salafist movement spread throughout the country. In this context, Bouaoun said, “Security appointments following the overthrow of Ben Ali — from 2011 until 2013 — did not comply with security regulations and those appointed were not subject to a background check at the judicial, criminal and political levels.”

He added, “Those who were dismissed were not originally well-trained after they joined the security establishment, and they lacked immunity to ideological polarization.”

In 2011, the Ministry of Interior’s agencies were subjected to a restructuring, which consisted of dissolving the intelligence agency and dismissing a number of security leaders with extensive experience in countering terrorism, under the reasoning of sending away the symbols of the former regime.

A senior official at the Ministry of Interior who spoke to Al-Monitor on condition of anonymity said, “Since the end of 2015, we have been reviewing the security appointment standards, which once again became strict, by conducting the necessary investigations and checks prior to the security establishment appointments.”

He added, “Such infiltrations have always occurred globally. There is an self-reform system at the Tunisian security establishment that allows getting rid of whoever does not abide by internal regulations or was proved to have ties with extremism, smuggling or criminal networks. The regulatory bodies within the security institution are the ones following up on this issue and imposing all of the necessary sanctions on violators, starting with a warning followed by dismissal and prison sentences."

Historically, Tunisia’s security services and army were not spared infiltration attempts by Islamic groups. In December 1987, the authorities dismantled a group affiliated with the Islamic Tendency Movement, which later became the Ennahda movement, found within the army and security establishment. The group had planned a military coup to overthrow Habib Bourguiba, but then Ben Ali came to power. Moncef Ben Salem, the late leader of Ennahda, revealed in 2003 the plan of the coup and infiltration of the military establishment.

After the fall of the Ben Ali regime and the rise of Ennahda, several sources indicated that the movement had tried to take over the Ministry of Interior and infiltrate security agencies.

In the Arab world, various Islamic movements have succeeded in infiltrating the army, some of which came to power. In Egypt, for instance, a jihadi cell within the army managed to assassinate President Anwar Sadat in 1981. In 1989, the Sudanese National Islamic Front, led by Hassan al-Turabi and army officer Omar al-Bashir, brought down the democratically elected Sadiq al-Mahdi’s government.

The Tunisian security agencies continue to be engaged in intelligence warfare against jihadi groups. The party that is able to infiltrate its opponent successfully and obtain information on it and its movements could win the battle. The issue of intelligence infiltration has also revived talk of reforming security institutions according to political changes the country witnessed following the departure of Ben Ali. While the reform has started, its pace has been very slow.