Is Tunisia prepared for return of thousands of Islamic State fighters?

Thousands of Islamic State fighters are expected to return to Tunisia, where the authorities are uncertain how to deal with the risk they may pose. 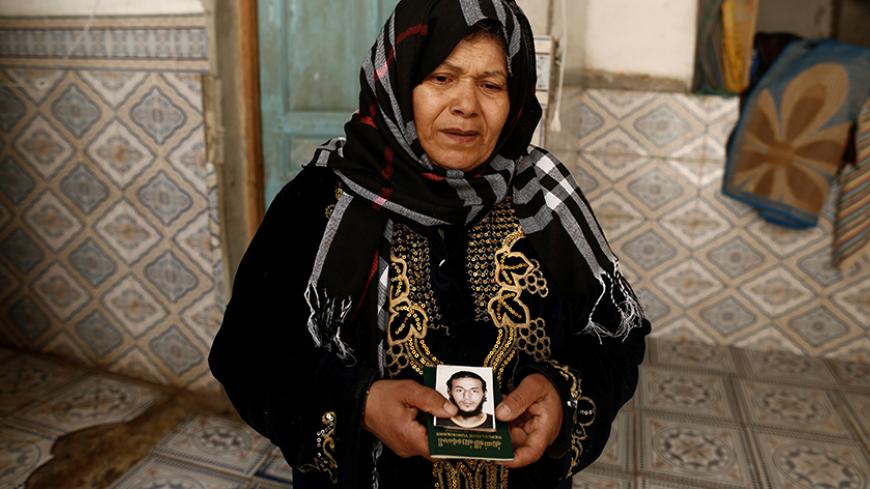 Fethiya Charni holds a photograph and the passport of her son Tarak Slimi, who is suspected to have joined the Islamic State, at her house in El Kef, Tunisia, April 14, 2016. - REUTERS/Zohra Bensemra

The areas controlled by the Islamic State (IS) are beginning to recede on various fronts. In Syria, Libya and Iraq, IS has suffered extensive defeats and lost towns and villages that were of great importance for the group and its fighters who had joined it from all over the world. These successive defeats pose a pressing question about the fate of thousands of foreign fighters, while the fear in the countries from which they came is rising, as they are preparing to return home.

Large numbers of fighters of Tunisian nationality have joined IS ranks in Syria, Libya and Iraq, and estimates indicate that the number of Tunisian fighters in Syria and Iraq amounts to over 3,000 fighters, while in Libya, Tunisians represent the largest percentage of IS members, reaching more than 500 fighters. Hence, the Tunisian authorities face the dilemma of how to deal with potentially thousands of returning IS fighters, while it has been witnessing the presence of jihadi groups that became active in the western mountainous region four years ago.

The most prominent jihadi group active in this region is Katibat Uqba Ibn Nafi, loyal to al-Qaeda in the Islamic Maghreb, which is an extension of Ansar al-Sharia and Jund al-Khilafah that have pledged allegiance to IS.

Despite their different allegiances, these groups stand united in carrying out attacks against the Tunisian security forces and the army through ambushes and landmines; the attacks have caused the government forces great human losses since 2012.

The Tunisian authorities are yet to reveal any plan on how to deal with these returnees, but at the same time, dozens of those who returned were sent to prison as provided for by Tunisian law, which punishes every “citizen who puts himself at the disposal of a terrorist organization abroad.”

According to the Tunisian Ministry of Interior, up until early 2016, around 600 fighters have returned to Tunisia from different fighting fronts. In November 2015, the authorities placed 92 returnees under house arrest days after a bombing targeted a presidential guard bus and killed 12 people.

Hadi Yahmed, a researcher on Islamic groups, believes that the return of young Tunisian fighters from Syria, Libya and Iraq is considered one of the most dangerous security issues in Tunisia today. Yahmed, who wrote a book on jihadi movement in Tunisia, told Al-Monitor, “The most serious issue is that the Tunisian security authorities do not have a clear plan yet to thwart the danger that returnees pose. Many terrorist attacks that have recently occurred in the country prove that those who returned from Libya, Syria and Iraq have contributed to terrorist activities.”

For instance, Saifuddin Rizki, the young man who attacked the Sousse tourist resort in July 2015, killing 38 tourists, including 30 British, had received training in IS camps in Libya, specifically in the city of Sabratha in the western region. This happened to be the same city through which dozens of Tunisian fighters infiltrated the Tunisian city of Ben Guerdane in March 2016 and attacked security and sovereign centers, in an attempt to establish in the city an IS-affiliated Islamic emirate, as revealed by security investigations.

“Security surveillance and follow-up methods are yet to diminish the danger posed by returnees on security, despite the high costs and logistical resources required for this surveillance. Sending returnees to prison was only a swift response adopted by the authorities when some were proved to be involved in terrorist operations abroad,” Yahmed said.

He added, "As far as social integration is concerned, the government has no set program to reintegrate these returnees into society, knowing that mixing them with ordinary prisoners can have serious consequences given their ability to recruit new members."

For his part, Union President of the Tunisian Organization for Security and Citizens Issam Dardouri raised the issue of “proving the offense of terrorism” and the returnees’ true identity.

In this context, Dardouri told Al-Monitor, “There is a real security problem when it comes to dealing with returnees as the issue is tightly linked to the severed diplomatic relations with Syria. The security units cannot detect all the members involved in terrorist acts unless there is evidence and clues — which are often hard to find in the absence of security cooperation between Tunisia and other countries and security agencies, let alone when ties are completely severed. Add to this that members who head to hot spots usually opt for illegal tracks, which makes evidence almost nonexistent.”

Leaders in the Union of Internal Security Forces had put forth proposals in September 2015 to confront the issue of returning fighters from the battlefield; some of these leaders suggested the withdrawal of citizenship. However, this proposal collides with Article 25 of the constitution, which stipulates, “No citizen shall be deprived of their nationality, exiled, extradited or prevented from returning to their country.”

For his part, Rachid Ghannouchi, the leader of the Islamist Ennahda movement, had suggested in August 2015 a “repentance law” in an attempt to reintegrate the returnees into society, referring to the experiences of Algeria and Morocco in this respect. Ennahda, however, did not put forward the relevant draft law.

According to Dardouri, this proposal is a mere “attempt to find those a legal escape, which could set the stage for serious security risks.”

Dardouri added, “Before allowing the return of those members, the concerned institutions — such as the security and military institutions, courts, social affairs and religious affairs authorities — should find formulated joint programs to ensure that those [ticking] bombs [returning members] do not infiltrate the community, and to rehabilitate and reintegrate those who can be reintegrated into social life as soon as they have undergone investigations. However, we shall warn against the legalization of the return of those members, who, in turn, are looking to join sleeper cells or carry out reprisals.”

According to Yahmed, those returning from flashpoints will have a hard time joining active jihadi groups in the western mountains of Tunisia, at least in the near to medium term, given the security blockade imposed by the government forces on the entry and exit points of this area.

But Yahmed said, “Those fighters who have fought on several fronts have come to constitute standby combatants who are trained and ready to engage in any future battle against the state and society whenever the country witnesses a serious security development.”