Despite security gains, IS still seeking foothold in Tunisia

The discovery of warehouses filled with heavy weapons in Tunisia's border area reveal that the Islamic State and its affiliates are still active despite the security crackdown on them. 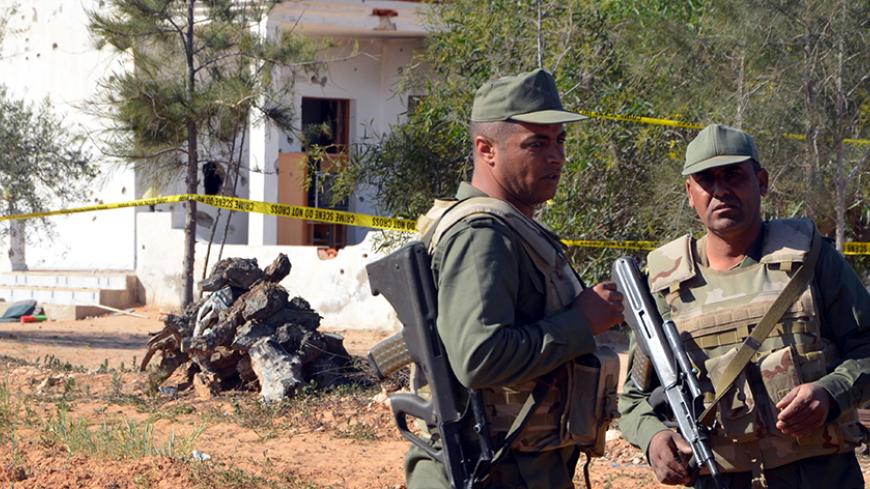 Tunisian soldiers stand guard at the scene of an assault on a house outside the border town of Ben Guerdane, Tunisia, March 3, 2016. - FATHI NASRI/AFP/Getty Images

Four warehouses containing large quantities of weapons were discovered over the past days in the Tunisian town of Ben Guerdane on the border with Libya. On Nov. 12, the Tunisian Ministry of Interior announced that there is a weapons warehouse in one of the olive forests in the city. On the same day, the ministry unveiled a second underground store containing war material, including rocket-propelled grenade launchers.

On Nov. 13, the ministry said it discovered a third warehouse in the city containing a large quantity of arms and ammunition, including SAM7 missiles. On Nov. 14, security forces uncovered a fourth store in the Amiriyah neighborhood in the city of Ben Guerdane. While such discoveries show that jihadi groups in Tunisia still enjoy a margin of movement and are planning to establish an emirate, they also mark a great security success for Tunisian authorities.

In this context, the question arises as to how the security services managed to detect these stores in one fell swoop and in such a short time. It all started Nov. 6 when a Tunisian soldier named Saad Ghazlani was killed by an armed group in the city of Kasserine, located in the west of the country. On the same day, the Islamic State (IS) claimed responsibility for the attack. Following the operation, Tunisian troops launched a sweeping operation in the western mountains on the border with Algeria. Tunisia announced Nov. 9 the killing of Talal Saidi — the leader of the group involved in the killing of Ghazlani — in the Jabal Saloum region in Kasserine. Saidi was the emir of Jund al-Khilafah, which is loyal to IS.

According to press statements by the official spokesman for the Tunisian Ministry of Defense, Col. Belhassen Oueslati, the weapons stores were discovered in the city of Ben Guerdane as “a result of information found on the phone of Saidi.”

Nizar Maqni, a Tunisian terrorism analyst, said that the disclosure of such large quantities of weapons in the border town of Ben Guerdane “reveals the IS intention to completely seize the city.”

He told Al-Monitor, “We are collecting numerous and sizeable weapons from one area only. What is serious about this is that the weapons include anti-aircraft SAM7 missiles, as per the Tunisian Ministry of Interior, and this is a precedent in Tunisia. IS wants to occupy Ben Guerdane region through more intensified fire [weapons] than the Feb. 20 operation witnessed by the city in retaliation for the US strike against IS in the city of Sabratha in Libya near the Tunisian border. The quality of the discovered weapons reflects the intention of the organization to control the geographical area. It is unlikely for these weapons to be stored for transfer to the border with Algeria, knowing that jihadi, al-Qaeda and IS fighters are stationed in the mountains of Kasserine and have been fighting a guerrilla war since 2012 against the army forces and the Tunisian guard.”

He added, “I think a replica of the Ben Guerdane scenario — i.e., the attempt to control Ben Guerdane — is in the making, but this one will include more fire and will take into great consideration the [IS] attack that aimed to take over the city in March. The weapons that were found can protect the airspace from any airstrikes and can allow IS — should it control the city — to have defensive groups and other attacking groups that would be tasked with expanding into neighboring regions. In other terms, this is another attempt to occupy the Libyan city of Sirte similarly to the February 2015 attempt. At the time, IS lost the city after the liberation operation launched by the Al-Bonyan Al-Marsous operation, loyal to the Government of National Accord forces, in May 2016.”

It is noteworthy that IS launched a terrorist attack against the city of Ben Guerdane in March 2016, leaving dozens dead and wounded. IS wanted to establish its own emirate in the city, knowing that 50 IS fighters who took part in the attack on the city hailed from the city itself. Before that, Tunisian authorities had announced August 2013 the creation of a military buffer zone along its eastern border to prevent weapons smuggling and ammunition coming from Libya into the country.

Mustafa Abdul Kabir, a civil activist in Ben Guerdane, told Al-Monitor, “The discovered weapons date back to 2012 and 2013. They are not newly stored but were smuggled from Libya to Tunisia and stored in the town of Ben Guerdane prior to the creation of a buffer border zone, as per security sources. This discovery reveals the extent of organizational interdependence between jihadi groups in Libya and their counterparts in Tunisia. This [interdependence] started in 2011 following the fall of the late Col. Moammar Gadhafi's regime and the proliferation of arms in the country.”

In the wake of the fall of the Gadhafi regime, large amounts of weapons were smuggled into Tunisian territory, according to a report by the UN Security Council expert group, which has been monitoring the arms embargo imposed on Libya since 2011. The report was released in April 2013.

In the same context, a study on the jihadi movement in Tunisia based on judicial dossiers was published Oct. 26 by the Tunisian Center for Research and Studies on terrorism. It revealed that jihadi leaders, namely the leader of Ansar al-Sharia, Saifullah bin Hussein — also known as Abu Iyad — showed since August 2011 interest in sending jihadi members to the city of Derna, located in the far east of Libya, to receive military training. Those were also interested in introducing weapons from Libya to Tunisia and storing them in preparation for any confrontation with the Tunisian state. Also, Ansar al-Sharia established in 2011 the so-called guesthouse in the city of Sabratha, in western Libya, to receive new Tunisian jihadi members.

Whether the discovered weapons are new or old, their discovery is deemed a security success for the Tunisian security services, especially considering that it followed the killing of Saidi. While it led to the killing of the leader of the IS branch in Tunisia, it revealed the ability of jihadi groups to move despite the larger war being waged by the state against them. It also revealed that the desert border with neighboring Libya is still the weak flank of Tunisia, from which arms are introduced and to which supporters of the jihadi movement travel to be trained to use weapons and then return to fight government forces or carry out terrorist operations, as happened in the Sousse resort attack in July 2015 and the Bardo Museum attack in March 2015.