The real reason Tunisia renewed its state of emergency

The state of emergency in Tunisia was renewed nationwide despite the fact that the security situation has improved, which has raised questions on the reasons behind it. 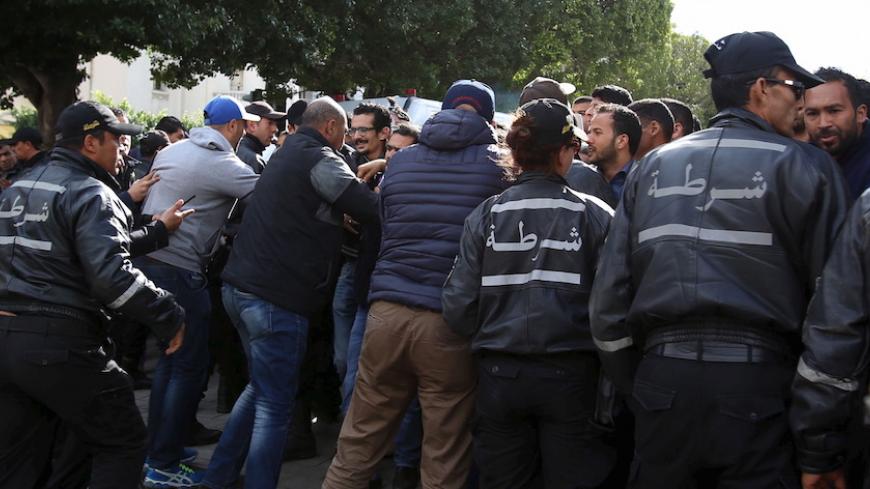 Unemployed graduates clash with riot police during a demonstration to demand the government provide them with job opportunities in Tunis, Tunisia April 9, 2016. - REUTERS/Zoubeir Souissi

The decision was issued despite the fact that the security situation has improved in the country. This raises questions about the motives behind it, particularly since the state of emergency, according to Tunisian law, allows the authorities to impose a curfew and ban labor strikes and public gatherings without judicial permission.

Political analyst Nizar Maqni told Al-Monitor that this renewal can be interpreted at both the security and social levels. He said, “First of all, this renewal is designed to counter terrorism and terrorist operations, particularly since the threats have persisted. This is in light of the dormant cells’ suspicious moves in the country, especially those affiliated with the Islamic State [IS], which acts to retaliate and respond to IS defeats in Libya at the hands of the Libyan presidential and national accord government forces, or in Syria and Iraq, especially under the Iraqi army’s campaign against IS in Mosul. Also, the jihadi cells are still moving. Recently [Oct. 17], a plan was disclosed to assassinate the interior minister and target sovereign centers. This is added to the security services’ fears about the return of Tunisian fighters from the battles, at a time when the authorities are aware that they failed to control the border entirely, which has raised security concerns in this regard.”

Since early October, Tunisia’s security services have dismantled several jihadi cells, some of which are affiliated with Ansar al-Sharia, which has been banned since 2013, while others are affiliated with IS. According to media reports, security forces arrested IS’ emir in Tunisia, Iskandar Freij, also known as Abu al-Bara al-Tunisi. On Aug. 24, Tunisian authorities extended the military buffer zone along its eastern border with Libya for another year. The buffer zone was created in August 2013 to prevent the smuggling of arms and ammunition from Libya to Tunisia.

The last terrorist attack that targeted Tunisia was the jihadi attack in Ben Guerdane near the border with Libya in March 2016, killing 54 people. Since then, the country has witnessed a remarkable security improvement. Yet the authorities renewed the state of emergency three times since March 2016, in July, September and October.

Also, Western countries reiterated their concerns about Tunisia’s security situation. On Oct. 20, the French Foreign Ministry called on its citizens traveling to or residing in Tunisia to exercise caution and avoid crowds. On Sept. 30, the United States warned its citizens to avoid travel to southeastern Tunisia, near the border with Libya, and to the mountains in western Tunisia.

Maqni said, “Second of all, the renewal of the state of emergency came at a time when the current government needs to preserve a legal argument to suppress any social movements that could break out in the country, particularly any protest against the 2017 new budget law, if approved by parliament. This law had raised controversy over higher taxes and the freezing of salary raises."

The Tunisian General Labor Union, the largest trade union in the country, organized an Oct. 21 strike and a series of demonstrations throughout the country in protest against government plans to freeze public-sector salary raises in 2017. Under such social tension, the state of emergency law grants the authorities the right to ban labor strikes and social protests. Violators can be sentenced to six months to two years in prison, in addition to fines.

Human Rights Watch recommended in its Oct. 6 report, “Ensure that measures taken under the state of emergency are not arbitrary, are strictly necessary for the exigencies of the situation and are ended as soon as they are no longer strictly necessary and that they are carried out with respect to the rule of law and provide the affected person with access to a meaningful review of any decision restricting his or her liberties, including the right to judicial review of any form of detention.”

Tunisian journalist Abdul Sattar Aydi told Al-Monitor, “The renewal of the state of emergency and Western embassies’ warnings to their nationals indicate that there are security threats in the country and in the region in general, namely the volatile situation in Libya and war on IS. Yet this renewal is a negative indicator for the country's image abroad, and it weakens its chances of attracting foreign investment, which Tunisia is in dire need of. It also reduces the chances for the restoration of tourism activity following the setbacks in the wake of the attack on the Bardo National Museum in March 2015 and the attack on a Tunisian resort in Sousse in June 2015, which killed dozens of tourists.”

Aydi added, “It is better to lift the state of emergency for a better domestic and international impression toward the country's image and better economic growth. It does not mean [that the authorities need to] be inactive in the face of security threats; security and judicial services have in hand a law regulating the fight against terrorism, it is namely the anti-terrorism and anti-money laundering act of 2015, and they do not need [to act] under the state of emergency law to arrest suspects or dismantle terrorist cells. This is true particularly since the government can take advantage of the state of emergency law to restrict individual freedoms, suppress social protests and labor strikes, or undermine freedom of expression, publication and press.”

In short, Tunisia is still facing huge security threats, especially with the deteriorating situation in Libya, its eastern neighbor, and ongoing clashes with jihadi groups in the western mountains on the border with Algeria. In contrast, social, labor and civil forces have demanded that the state not use the fight against terrorism as a pretext to suppress individual and public freedoms and postpone the achievement of development. How to balance between security and freedoms remains a challenge in Tunisia.