How the new government plans to save Tunisia 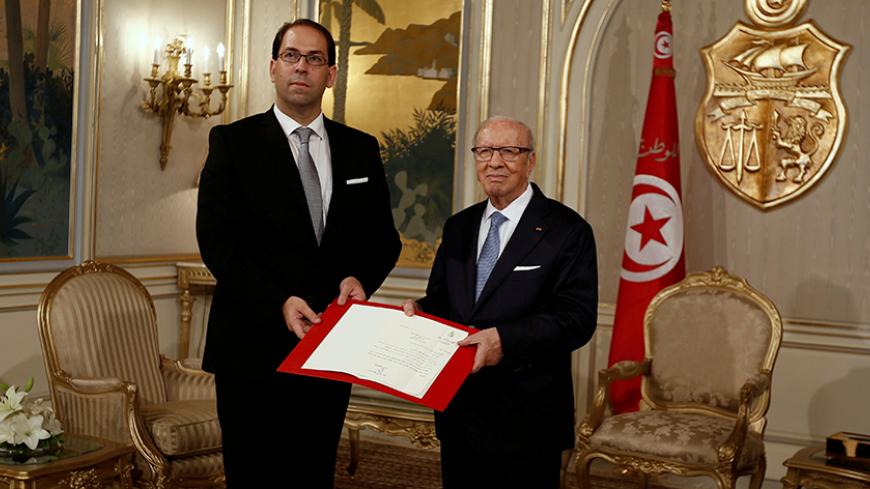 The Tunisian Parliament is getting ready to vote for confidence in the new government before Sept. 1, the legal deadline set for the government's formation under the Tunisian Constitution. On Aug. 3, President Beji Caid Essebsi appointed the leader of the ruling Nidaa Tunis, Youssef Chahed, to form a new national unity government after the parliament withdrew confidence from the former government led by Habib Essid on July 30, under accusations of inefficiency.

Essebsi launched an initiative during a June 2 interview on state television “to form a national unity government whose priorities include the war on terrorism and corruption and the entrenchment of democracy.” The government is to include parties and unions, unlike the deposed one, which was formed by four parties in the parliament: Nidaa Tunis, to which Essebsi belongs; the Islamist Ennahda; and two liberal parties, the Free Patriotic Union and Afek Tounes.

The new government will face major security and economic challenges, in addition to having to deal with corruption.

On July 13, the Tunisian presidency published the text of the initiative, called the “Carthage Document,” which includes the outline of the potential government’s work schedule.

As designated prime minister, Chahed was already part of the decision-making circles in the country. Before his appointment, he was minister of local affairs for the deposed government. On the day of his appointment, he said that the new government will work on “achieving five main priorities: winning the battle against terrorism, declaring war on corruption and the corrupt people, fostering development to create job opportunities, controlling the financial budgets and focusing on the environment and sanitation.”

He further noted that the new government will “give more chances for representation to the youths and women and will be honest with the Tunisian people from the beginning about their financial, social and economic situation. The country is at a critical stage and needs exceptional decisions and sacrifices.”

But despite the optimism in his speech, Chahed will have a tough time on every level. The tasks he proposed in his governmental program require patience and wide governmental coordination as well as a stable security situation.

Journalist Mohamed Bettaieb told Al-Monitor, “The realization of the five points that Chahed listed in his speech depends on the first point, which is fighting terrorism. The economic situation, fighting corruption and controlling the financial budget all require security and stability. The clashes with the terrorist groups are the main reason behind the deteriorating economic situation.”

Since 2011, Tunisia has been the target of several terrorist operations executed by jihadi groups affiliated with al-Qaeda like the Okba Ibn Nafaa Brigade and others supporting IS. The attacks have claimed the lives of more than 220 security and military personnel and 98 civilians, according to a survey by the local Inkyfada website.

Bettaieb added, “Improving the security situation depends on improving the performance of the security apparatus, which has recently achieved remarkable success. For instance, the month of Ramadan this year was free of any terrorist operations, which hasn’t been the case since 2012. Many terrorist operations targeted the army and police in 2013, 2014 and 2015, when the tourist resort of Sousse was attacked. In March 2016, IS attacked Ben Gardane to establish an Islamic emirate.”

He noted, “These successes — relative as they might be — must be maintained to preserve the current defense and security team. The ministers of defense and interior must also remain in their positions to save time and effort for the country, especially since they are technocrats and are not affiliated with any political party. This ensures that their ministries are not biased to any political party.”

Bettaieb added, “The new government is up against another challenge, which is the return of Tunisian youths fighting with jihadi groups in Syria and Libya, especially in the wake of the Islamic State defeats in these battlefields, and the challenge of fighting jihadi groups in the western mountains along the Algerian border.”

Tunisians make up much of the ranks of IS in Syria, Libya and Iraq. According to most estimates, the number of Tunisian fighters in Syria and Iraq exceeds 3,000. In Libya, Tunisians constitute the majority of IS members at approximately 500 fighters.

This difficult security situation has led to economic decline, and Tunisia has been suffering a tough economic situation since 2011. The Tunisian Central Bank warned Aug. 12 that the rising trade deficit, which neared 6 billion dinars ($3 billion) in the first half of 2016, might worsen. Since the fall of the former regime led by Zine el-Abidine Ben Ali, the state has adopted a foreign-debt strategy. Tunisia’s debt has increased by 58% since 2011. Tunisia’s most recent debts are bonds worth $500 million issued on Aug. 5 with US guarantees.

Apart from the economic crisis and the war on terrorism, Chahed’s new government will face rampant corruption in the state institutions. Corruption in the country is worse than it was before the fall of Ben Ali’s regime in 2011. According to the Corruption Perceptions Index published annually by Transparency International, Tunisia came in 59th in 2010, Ben Ali’s last year. In 2015, it occupied 76th place. This decline was a wake-up call for local civil society groups to launch initiatives to curb corruption. The May 2016 survey revealed that 62% of Tunisians believe that the government is not making enough efforts to fight corruption.

Political analyst Abdel Sattar al-Aidi told Al-Monitor, “The new government’s success in achieving the priorities that Chahed mentioned in his designation speech depends on a clear and accurate program and on the political parties’ willpower to form a government that would pull the country out of its crisis instead of power-seeking and engaging in an undeclared conflict. Most importantly, there should be public and union support from the Tunisian General Labor Union, but this will bank on the new government’s economic vision. It is noteworthy that the Tunisian General Labor Union is the largest union in the country and can make the government’s work successful by declaring a social truce, halting labor strikes and delaying salary increase demands. Chahed noted in his speech that the country needs exceptional decisions and sacrifices. We are afraid these sacrifices might affect the limited-income class through reducing basic material subsidies or freezing salary upgrades.”

Each time a new government seeks the parliament’s vote of confidence, Tunisians’ hopes rekindle, and they dream of improving their economic and social situations. The prime ministers make promises to fight corruption, save the economy and enhance the conditions of the marginalized. But these hopes soon disappear. Will Chahed’s government be the exception to the rule? Or will it have the same fate as its predecessors?