A spokeswoman for Tunisian President Beji Caid Essebsi has dismissed claims that the head of state intends to fire the prime minister as politically baseless. 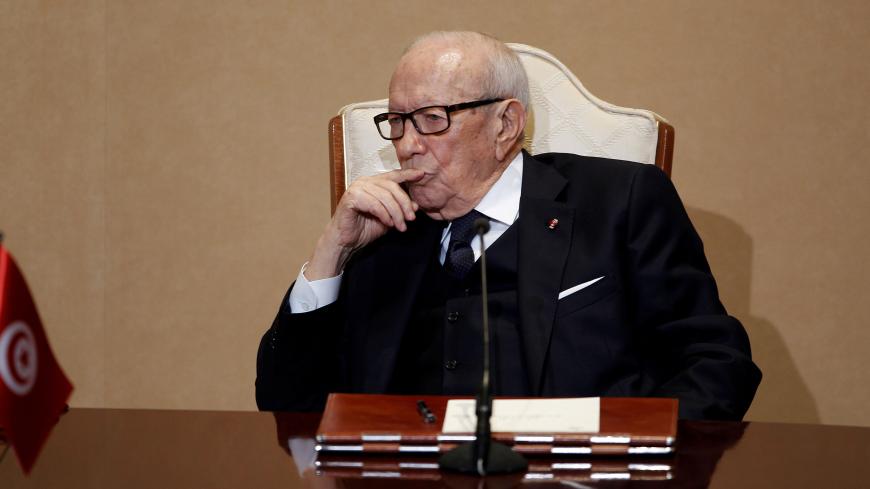 In a statement on the sidelines of the National Symposium on Major Reforms held April 11 in Gammarth, a northern suburb of Tunis, Saida Garrach, the spokeswoman for the Tunisian president, confirmed that the president does not wish to fire Prime Minister Youssef Chahed.

“Talks about President Beji Caid Essebsi’s intentions to dismiss Chahed are politically baseless. Some Tunisian political parties are trying to foment trouble,” Garrach said in statement to Shems FM radio. "Chahed’s government has the president’s support and confidence and is cooperating with the presidency.”

Garrach considered the claims about a crisis between Essebsi and Chahed as mere rumors by some political parties, without being more specific, that were designed to create confusion in the political sphere and shake the good relations between the government and the president.

Tunisian Assabah daily reported April 12 a major political crisis between the president and the prime minister, months after the latter announced his war on corruption, which led to the arrest of businessmen affiliated with Nidaa Tunis.

There have been talks behind the scenes that Hafedh Caid Essebsi, the president’s son, and his cronies are seeking to oust Chahed, but this step is likely to be postponed until after the municipal elections slated for the end of 2018.

Essebsi’s son has objected to Chahed’s war on corruption, arguing that it mainly targets businessmen affiliated with Nidaa Tunis.

During his speech on Tunisia’s Independence Day March 20, Essebsi spoke at length of the government’s predicament. “This is the prerogative of the parties that signed the Carthage Declaration [on July 13, 2016],” Essebsi said. This document was signed by a group of political parties in support of the national unity government.

He also noted that the “current situation necessitates that all parties be unified to come out of the crisis.”

Tunisia has been facing an unprecedented economic crisis, as the country’s foreign reserves took a nosedive following the devaluation of the Tunisian dinar, the decline in investment as well as the continuous disruptions in phosphate exports as a result of the social unrest in the mining area of Gafsa in the west of the country.

Meanwhile, Chahed is continuing on with a package of reforms, much to the objection of the Tunisian unions that argue the reforms involve excessive waste for public institutions.

As part of his anti-corruption campaign, Chahed is pushing to stop the secondment of personnel and reduce the number of public employees, in addition to reducing subsidies for basic foodstuffs and the privatization of some public institutions, which would be of great profit to the state as a result of the taxes leveraged on the private sector.

During the inauguration of the symposium, Chahed said, “Selling some parts of the public institutions will be a solution to the state’s budget deficit.”

“There is no need for the state to have some sectors,” he added, stressing that some institutions are accumulating losses and are not able to get funding without the direct support of the state.

On March 23, Chahed stated before parliament that he will go through with the reforms even if this means he would lose his political seat.

During the parliamentary session, Chahed said that the parties that want the departure of the national unity government are feeling that it poses a threat to them and the war on corruption will affect them.

The General Labor Union (UGTT), the largest in the country, expressed reservations about the prime minister’s reforms. At a meeting with parliament Speaker Mohammed Nasser April 5, UGTT Secretary-General Noureddine Taboubi considered the reforms to be “untimely,” as quoted by Shems FM radio.

Taboubi stressed the need for governmental change but did not clarify, so far, if he is calling for a ministerial reshuffle or changing the entire government, including Chahed. He expressed the UGTT's keenness on “pumping new blood into the government given the stalemate in the country that necessitates finding new solutions.”

Ajami al-Warimi, a parliamentarian and leader for the Ennahda movement, told Al-Monitor, “Changing the government is a prerogative of the prime minister and the parties of the ruling coalition [Nidaa Tunis and Ennahda], which continue to support Chahed and his ministers.”

Imad al-Daimi, a deputy for the pro-opposition Democratic Bloc, numbering 12 deputies, told Al-Monitor, “The prime minister’s reforms are far from the people’s expectations and serve only his personal interests in case he runs for the coming presidential elections slated for 2019.”

In an interview with France 24 on Jan. 31, Chahed said that he was not interested in the 2019 elections and is committed to endorsing Essebsi for a second term. He noted that his government will work on creating job opportunities, acknowledging the economic hardships in Tunisia.

“All signs indicate the government’s failure in light of the unprecedented surge in the rate of inflation and the debt volume, not to mention the state’s poor reserve of hard currency,” parliamentarian Ziad Lakhdar for the pro-opposition Popular Front Bloc told Al-Monitor.

Since the 2014 elections, four governments have been elected in Tunisia. The first and the second were led by Habib Essid, who was succeeded by Chahed in August 2016.