The announcement by Tunisian President Beji Caid Essebsi of the dissolution of Nidaa Tunis' alliance with Ennahda, ending five years of consensus government in Tunisia, has sparked controversy. 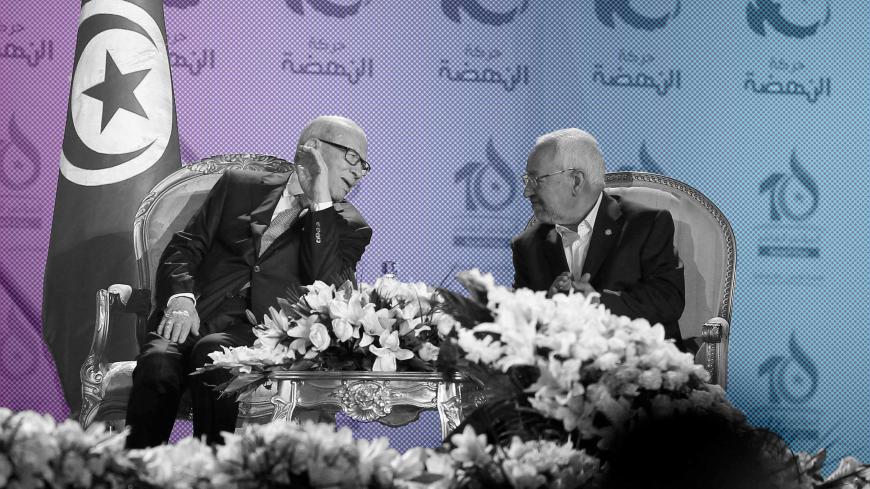 TUNIS — In a televised interview on Sept. 24, Tunisian President Béji Caid Essebsi confirmed the end of the five-year alliance between his ruling party, Nidaa Tunis, and Ennahda. “Relations between Beji Caid Essebsi and Ennahda have been severed at Ennahda’s request,” he said, referring to himself in the third person on the program “Tunis al-Youm,” broadcast by Al-Hiwar al-Tunisi. “There is no longer a consensus between me and them.”

Responding to Essebsi’s remarks, Ennahda issued a statement the following day denying having requested an end to the alliance, stressing its importance for preserving stability in the country. The statement further asserted that Ennahda’s disagreement with Essebsi on how best to maintain stability — which in Ennahda's eyes is by backing Prime Minister Youssef Chahed, a former Nidaa Tunis member — does not affect its alliance with Essebsi.

The alliance, between Tunisia's two largest parties, had been agreed to by Essebsi and Ennahda leader Rachid Ghannouchi during a meeting in Paris on Aug. 15, 2013. On the fifth anniversary of the agreement, Ghannouchi posted lengthy remarks on Facebook about the meeting, stressing its importance in sparing Tunisia the chaos and division experienced by Egypt following the toppling of the government there in 2011.

“The Paris meeting, which set the foundations for a full path of political and societal consensus, has allowed a comprehensive response to the call for national dialogue by civil society organizations,” Ghannouchi wrote. “It set out for Nidaa Tunis and Ennahda the means to succeed in leading a calm political scene with two large parties capable of polarizing the Tunisian street. The meeting restored the balance that was disrupted after the October 2011 elections.”

Indeed, Tunisian political observers have noted that the Paris meeting soothed the political tensions and popular unrest that erupted after the assassination of left-wing oppositionist Mohamed Brahmi on July 25, 2013, leading to calls for the Ennahda government's ouster. Nidaa Tunis' leadership is no longer content with the results stemming from the Paris meeting.

Nidaa Tunis co-founder Ridha Belhaj told Al-Monitor, “The official announcement by the president of the republic of parting ways with Ennahda was a long overdue and urgent demand by Nidaa Tunis leaders. Several members resigned to pressure the president into ending this relationship, but he had refused and insisted on the alliance.”

Belhaj further stated, “Essebsi’s milestone announcement was a major turning point in the history of Nidaa Tunis and the history of Tunisia. It is a golden opportunity to redress the country’s political imbalance caused by Ennahda, which has chosen to monopolize rule and destabilize the bilateral alliance.”

Accusing Ennahda of trying to “monopolize rule” is Belhaj's way of expressing Nidaa Tunis' position that the Ennahda-backed Chahed has lost legitimacy, due to his performance as prime minister. Essebsi had appointed him to the position in August 2016. The Nidaa Tunis leadership has called for Chahed's resignation, but he has refused to step aside.

Belhaj has called on Nidaa Tunis supporters to unite ahead of legislative and presidential elections scheduled for 2019. He also urged them to continue to work to bring down Chahed's government. After a power struggle waged by Hafedh Caid Essebsi, President Essebsi’s son and Nidaa Tunis executive director, failed to dislodge Chahed from office, Nidaa Tunis suspended Chahed’s party membership, on Sept. 15. Hafedh has accused Chahed of monopolizing the government as well as using state institutions and ministers to extend his political influence and also believes Chahed has political ambitions of running for president and leading Nidaa Tunis.

The dispute between Nidaa Tunis and Ennahda had peaked in late May, with Nidaa Tunis calling for Chahed's ouster and a complete cabinet overhaul for alleged poor management of the country's affairs. Ennahda, however, insisted on keeping Chahed at the helm of state and only a partial cabinet reshuffle. On May 28, the Carthage II Agreement — laying out new reform measures aimed at overcoming political and economic crises and signed by Nidaa Tunis, Ennahda, the country's biggest labor union and other influential actors — was indefinitely suspended, due to the disagreement among its signatories over forming a new cabinet.

Mohamed Bou Oud, a political analyst, believes that Essebsi’s decision to end the alliance with Ennahda stems from anger.

“He is mad at Ennahda for not siding with him and his son, Hafedh Caid Essebsi, in their battle against Chahed,” Bou Oud asserted to Al-Monitor. “As far as I know, Essebsi asserted during his last meeting with Ghannouchi that he will resort to Article 99 of the Tunisian Constitution, on a vote of confidence, to oust Prime Minister Youssef Chahed. He also called on Ennahda parliamentarians to withdraw confidence from Chahed, but Ghannouchi refused and insisted on preserving government stability.”

A vote of no confidence under Article 99 would bring down the current government and allow the president to “ask the most competent person to form a government in a period not exceeding 30 days.” Bou Oud argued that Essebsi feels that Ghannouchi and Ennahda have ditched him in siding with Chahed.

“The next stage will witness a new alliance between the Ennahda parliamentary bloc and the newly formed National Coalition bloc, which supports Chahed as head of government,” Bou Oud said. “This comes amid a collapse of the Nidaa Tunis parliamentary bloc that saw many of its parliamentarians resign.” The National Coalition consists of independents and resigned members of Nidaa Tunis, Machrouu Tunis and the Free Patriotic Union.

Ennahda still holds the most seats in parliament, with 68 out of 217. Nidaa Tunis, which came in second in the October 2014 elections, with 55 seats, now has 42, meaning the pro-Chahed National Coalition, with 43 seats, is now the number two faction in the parliament. The resignations from Nidaa Tunis have been driven in part by opposition to the alliance with Ennahda and by opposition to the attempt to remove Chahed from power.

Ennahda spokesman Imad Khmeri told Al-Monitor that the alliance with Nidaa Tunis had been based on the policies imposed by the unstable and volatile economic, political and security conditions of the democratic transition, polices to which Ennahda committed itself politically. Concerning Ennahda’s support of Chahed, Khmeri said, “This does not contravene the consensus with Nidaa Tunis and its founding leader, President Beji Caid Essebsi. The Ennahda-Nidaa Tunis alliance does not mean total agreement on all issues.”

The Nidaa Tunis leadership supports the break with Ennahda. They see it as a new beginning, a chance to shuffle party ranks with the goal of satisfying its popular base ahead of the 2019 elections. Some believe Ennahda has benefited from the decline of Nidaa Tunis’ parliamentary power and popularity and is now planning a new political alliance with Chahed and the parliamentary bloc supporting him.