The resignation of eight Nidaa Tunis parliament members fans the flames of the escalating row between the son of President Beji Caid Essebsi, Hafedh Caid Essebsi, who is also Nidaa Tunis’ executive director, and Prime Minister Youssef Chahed after Essebsi suspended the latter’s membership in the party. 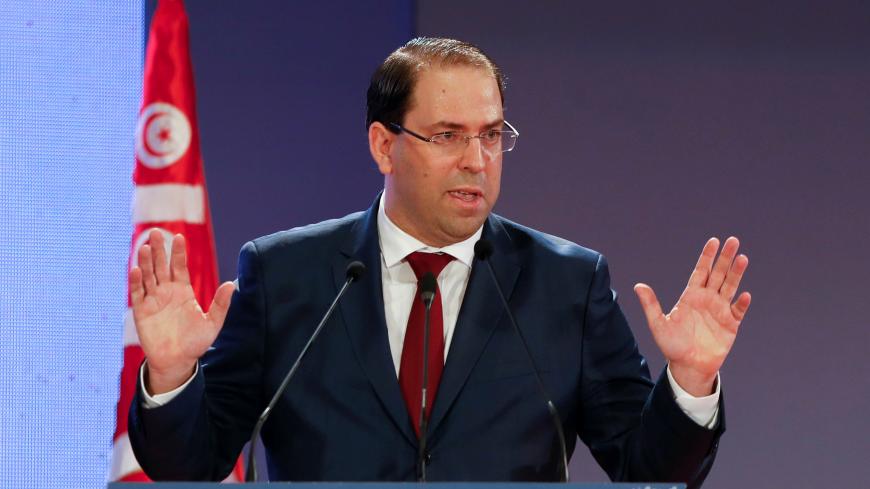 Tunisia's Prime Minister Youssef Chahed gestures as he speaks during a national conference over the 2019 budget in Tunis, Tunisia, Sept. 14, 2018. - REUTERS/Zoubeir Souissi

TUNIS, Tunisia — Tunisia’s ruling party, Nidaa Tunis, froze the membership of Prime Minister Youssef Chahed on Sept. 14. The decision came after Chahed refused to answer a questionnaire by Nidaa Tunis clarifying the nature of his relationship with the party.

A week earlier, on Sept. 8, eight parliamentarians from Nidaa Tunis' bloc of 56 parliament members submitted their resignations from the bloc. Parliament member Mohammed al-Rashdi, one of the eight, told the Tunis-Afrique Presse news agency that they will join the National Coalition, a new bloc initially composed of 33 parliament members supporting the government of Youssef Chahed.

The National Coalition bloc was formed Sept. 7 by independents and resigning members from political parties such as Machrouu Tunis and Free Patriotic Union.

The 217-seat Tunisian parliament is made up of eight blocs; Ennahda bloc is at the top with 69 seats, followed by Nidaa Tunis. With the eight outgoing parliament members who joined its ranks, the new National Coalition bloc supporting Chahed is expected to form the third force in parliament. The group resignation brought the number of the new coalition to 41. This could change the balance of power within the country’s parliament.

Parliament member Jalal Ghadira, one of the eight outgoing parliament members, talked to Al-Monitor about his breakup with the bloc along with seven of his colleagues. “Our step comes in light of the arbitrary decisions of the son of President Beji Caid Essebsi, Hafedh Caid Essebsi — Nidaa Tunis’ executive director — that undermine government stability,” said Ghadira.

He added, “As parliament members with Nidaa Tunis, we gave our confidence to the government of Youssef Chahed. We were against the decision to dismiss him in light of the government's economic recovery in sectors such as tourism and agriculture and the promotion of investments. But we were surprised by the unilateral decision of the party’s executive director calling for Chahed to resign and step down from the premiership.”

In turn, National Coalition parliament member Noureddine Mourabeti confirmed in a statement to the Anbaa Tounes news website on Sept. 7 that the bloc will support government stability.

Walid al-Jallad, another member resigning from Nidaa Tunis, told Al-Monitor that the new parliamentary bloc submitted to parliament on Sept. 17 the official file of its constitution. “Our coalition is likely to outnumber Nidaa Tunis’ parliamentary bloc in early October with the start of the parliamentary session. Other parliament members will be joining us,” he said, adding, “The coalition will not be part of the opposition, but rather will support government and state institutions through constructive criticism.”

Commenting on the suspension of Chahed from Nidaa Tunis, Jallad said, “Essebsi’s political decisions in Nidaa Tunis are absurd. They have no effect on the government's work. The competent authority is the parliament, not the political parties,” he said.

Observers of the political scene in Tunisia expect the National Coalition to strongly back Chahed at the political level and inside parliament. They believe it will keep him in power in light of talks about more resignations within the ranks of Nidaa Tunis' parliamentary bloc.

In this regard, journalist and political analyst Ziad al-Hani noted that Chahed succeeded in breaking what is left of Nidaa Tunis’ unity and forming a parliamentary bloc loyal to him. “He managed to win over parliament members to his side from Nidaa Tunis and other blocs to support his governmental decisions,” Hani told Al-Monitor, adding, “This will allow him to easily pass laws inside parliament — especially the 2019 budget law.”

Hani added, “Chahed had dealt a heavy blow to Hafedh Caid Essebsi when he accused him of making wrong choices that undermined the unity of Nidaa Tunis and pushed some of its members and leaders to resign and join other rival parties and blocs.”

He pointed out that the pro-Chahed National Coalition might in the coming days form a parliamentary alliance with Ennahda, which in turn wants Chahed to remain at the top of the government until the elections in 2019. “This would ensure Chahed a comfortable majority that wards off the specter of constitutional dismissal and secures him parliamentary protection,” said Hani.

Hafedh Caid Essebsi had previously lashed out at Chahed, attacking his government in an unprecedented manner. In a statement on May 29, Essebsi said, “The current government has turned into a political crisis. It is no longer a government of national unity.”

In a televised speech airing on Television Tunisienne 1 on the same day, Chahed replied to Essebsi’s attack and accused him of destroying the ruling party of Nidaa Tunis.

“The executive director of Nidaa Tunis, Hafedh Caid Essebsi, and his entourage destroyed the party and led it from one defeat to another,” Chahed said, adding, “His policies pushed many of the founding leaders and competences to leave the party and resign.” Chahed said, “It is time to reform the party to allow it to regain the Tunisians’ confidence.”

In the wake of the resignations, the party’s executive director issued a statement on Sept. 8. Hafedh Caid Essebsi slammed Chahed for receiving a group of Nidaa Tunis parliament members to ask them to resign from the party’s bloc and join the National Coalition.

“The head of the current government is preoccupied with political maneuvers and measures aimed to break the unity of political parties and parliamentary blocs as a top priority instead of focusing on the country's accumulated problems,” the statement said. It also accused the prime minister of exploiting state institutions to put pressure on parliament members and push them to resign in order to serve his political projects.

For his part, founding leader of Nidaa Tunis Ridha Belhaj accused Chahed of leading a coup within Nidaa Tunis and fragmenting the party for his own political gain.

“Chahed won several parliament members from Nidaa Tunis over to his side by adopting the carrot-and-stick approach,” Belhaj told Al-Monitor. He added, “This approach was especially efficient in attracting some parliament members who are businessmen and businesswomen and would follow anyone who would guarantee their interests.”

However, Belhaj contested that Chahed will not break Nidaa Tunis or be able to lure over its remaining parliament members. He stressed the party's determination to implement deep reforms to remedy mistakes and rearrange its ranks.

Some observers believe the prime minister has succeeded in turning the table against the son of Beji Caid Essebsi by securing parliamentary protection. It seems that this falls in tandem with a political project being patiently prepared by Chahed to run the presidential elections in 2019. Others believe that the battle between Chahed and Hafedh Caid Essebsi is far from over.