Will Tunisian prime minister resign or run for president?

Tunisian Prime Minister Youssef Chahed has been elected head of Tahya Tounes, which has sparked fears among political circles that he might use his post to serve party interests. 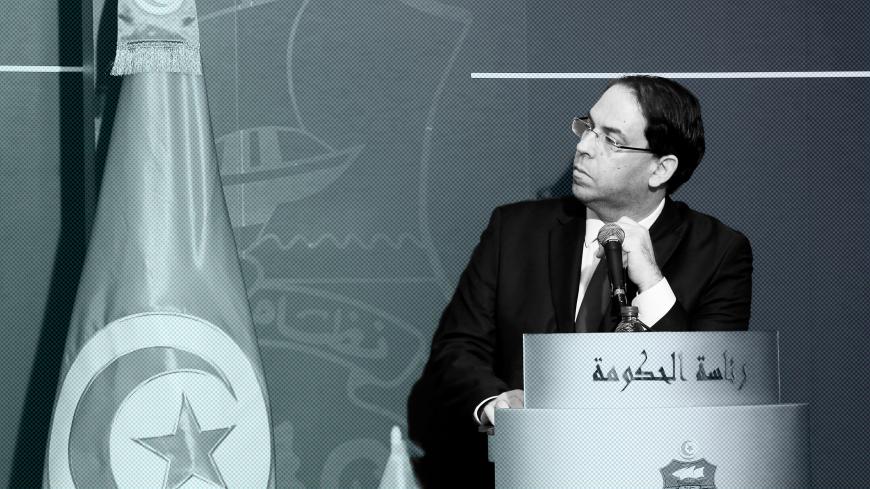 However, Chahed did not announce his resignation from the premiership, which fueled speculation about the options he would go for as the legislative and presidential elections scheduled for Oct. 6 and Nov. 17, respectively, draw near.

On Jan. 27, independent political figures, members of the regime of former President Zine El Abidine Ben Ali, dissident leaders of Nidaa Tounes and ministers from Chahed’s government announced the establishment of Tahya Tounes as an alternative to Nidaa Tounes, which witnessed an unprecedented wave of defections that threatened its survival.

Interparty disputes erupted as soon as the results of an electoral congress held in Monastir on April 6 were announced. Soufien Toubal, leader of Nidaa Tounes' parliamentary bloc, announced April 13 on Facebook that he had been elected president of the party’s Central Committee at a congress held in Hammamet. A day later, in a statement to state television, Hafedh Caid Essebsi, son of Tunisian President Beji Caid Essebsi, announced that he had been elected to lead Nidaa Tounes’ Central Committee at a party congress held in Monastir.

Ever since the decision to freeze his membership in Nidaa Tounes on Sept. 14, 2018, following the dispute with Beji Caid Essebsi's son, Chahed sought to establish a strong parliamentary bloc exemplified by the National Coalition bloc, which saw the light on Aug. 27, 2018.

Parliament member Walid al-Jallad, a member of both the National Alliance bloc and Tahya Tounes, told Al-Monitor that Chahed’s choice to run for the presidential elections is a decision he will have to take alone and then discuss with the party.

Jallad did not rule out the possibility of Chahed running for president.

He stressed that at the legal and constitutional levels, nothing stops Chahed from simultaneously serving as the head of the party and the prime minister. “The Tahya Tounes party is mainly run by the secretary-general of the party and the members of the executive office. Chahed’s current priority is the government,” he said.

In statements to Radio Shems FM on March 26, head of the Ennahda movement Rashed Ghannouchi did not rule out his party’s nomination of Chahed for the presidential elections. However, Ghannouchi has seemingly changed his mind after Chahed was announced head of Tahya Tounes. In statements to Mosaique FM on June 2, he said that “in the event that Chahed declares his candidacy for the presidential elections, Ennahda will have to reconsider its relationship with Chahed and his government.”

Chahed’s presidency over Tahya Tounes in parallel with his post as prime minister has been criticized by his political opponents, who found that there was a conflict of interest and that state institutions were being exploited to serve narrow party goals.

In a statement to Al-Monitor, Ghazi al-Shawashi, spokesperson and former secretary-general of the Democratic movement, called on Chahed to resign from the premiership. He said there are growing fears among political parties over Chahed’s exploitation of his post and the field visits he conducts to rural areas to serve his electoral campaign and the campaign of his party under the guise of government work.

“At the constitutional level, nothing stands in the way of Chahed’s nomination for the presidential elections. His ambitions are legitimate, but he should not have resorted to state means to support the Tahya Tounes party, and this is what actually happened during the municipal by-elections in the Souk El Jedid district on May 26. Several irregularities and violations occurred and were deemed serious by the Independent High Authority for Elections,” he added.

Boujmaa al-Mashi, head of the Independent Sub-Commission for Elections of the province of Sidi Bouzid, told the official news agency Tunis Afrique Presse May 23 that Tahya Tounes’ electoral list in the Souk El Jedid district has made serious violations during its campaign. He pointed out that during the party’s electoral campaign, officials and ministers from Chahed’s government were spread across the Souk El Jedid municipality in order to influence voters.

In an interview with Al-Sabah Al-Osbooi newspaper on June 3, head of Ennahda movement's Shura council Abdel-Karim al-Harouni called on Chahed to clarify his position and state whether he was running for president.

He said that “Chahed has to clarify his position. He should either focus on his party’s future or dedicate his time to the premiership by improving the country’s economic conditions, fighting corruption, oppression and crimes, and providing the country with the most favorable electoral conditions.”

Chahed has repeatedly refused to state whether he intended to run for president. But there are opinion polls whereby Chahed and Tahya Tounes held the lead in voting intentions ahead of the upcoming presidential and legislative elections.

According to some observers, Chahed can now run for president after he was officially elected as the head of Tahya Tounes, but other observers believe the new head of the party will settle for the legislative elections in order to preserve the post of prime minister.