Nidaa Tounes held two parallel elections for leadership of its Central Committee, further cementing divisions within the partying ahead of legislative and presidential elections. 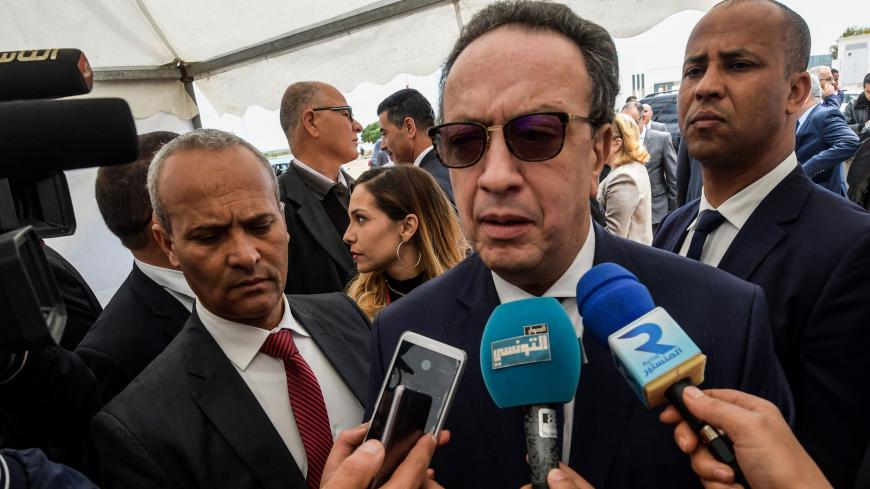 Hafedh Caid Essebsi, the Tunisian president's son and executive director of Nidaa Tounes, speaks to the press outside the party's congress in the coastal city of Monastir, April 6, 2019. - FETHI BELAID/AFP/Getty Images

TUNIS — Soufien Toubal, leader of Nidaa Tounes' parliamentary bloc, on April 13 announced on Facebook that he had been elected president of the party’s Central Committee at a congress held in Hammamet. A day later in a statement to state television, Hafedh Caid Essebsi, son of Tunisian President Beji Caid Essebsi, announced that he had been elected to lead Nidaa Tounes’ Central Committee at a party congress held in Monastir.

Nidaa Tounes had convened an electoral congress in Monastir on April 6 — with President Essebsi, the founder of the party in attendance — to elect members of the party’s political bureau. Elections for a new head of its Central Committee would then follow. Interparty disputes erupted as soon as the results were announced for the political bureau.

The new list of 32 members included Toubal and the younger Essebsi. The majority of the newly elected members were backers of Toubal. At a press conference on April 11, members supporting Hafedh rejected the April 6 results, fearing the majority would support Toubal in the Central Committee elections.

Hafedh loyalists called for holding committee elections in Monastir on April 13, while Toubal loyalists insisted on the legitimacy of the results of the April 6 elections and called for a parallel congress in Hammamet on April 13. Thus the vote outcomes were preordained along with dueling claims of legitimacy.

Nidaa Tounes parliamentarian Tayeb al-Madani, who participated in the Hammamet congress, told Al-Monitor that Hafedh has been ousted from the party's leadership and said that Toubal had submitted the party election results to the premier's office for approval. Madani also strongly criticized what he called “Hafedh’s attempts to take over the party by using his father’s position.”

MP Manji al-Harbawi, who took part in the Monastir congress, told Al-Monitor that the results of that vote had also been given to the premier.

The premier's office has yet to announce either result or take a stand on the legitimacy of the dueling congresses. There is talk of approaching the administrative court for a determination in case the premier's office fails to issue a ruling.

Harbawi said that the Montasir group will launch a campaign to prepare for legislative and presidential elections scheduled for Oct. 6 and Nov. 17, respectively.

Observers believe that the divisions within Nidaa Tounes, which in 2014 won the first presidential and legislative elections after the 2010-11 revolution, is now threatened with disappearing from the political scene due to the leadership dispute. Hafedh's political career is also seriously at stake.

Divisions erupted within the party when Hafedh, while serving as Nidaa Tounes’ executive director of Nidaa Tunis, was accused of excluding party members and parliamentarians from drafting internal policies of the party and of unilaterally making decisions. A common refrain was that Hafedh treated the party as personal property that he had inherited from his father.

Nidaa Tounes’ parliamentary representation has declined due to a wave of resignations stemming from the internal divisions, dropping from 86 in 2014 to 37 in 2019. The party now occupies third place in terms of parliament seats, with the National Coalition, affiliated with Prime Minister Youssef al-Chahed and Ennahda, forming the majority, with 68 seats.

Khaled Shokat, the current executive director of Nidaa Tounes, told Radio Mosaique last September that his party will side with the opposition in the 2019 elections due to the “Chahed government’s disrespect for democratic rules and the political program of the party.”

President Essebsi has tried to remain impartial in the row within the party he founded in 2012, being well aware of the appearance of possible nepotism in the current situation. His spokeswoman Saida Garrach said in an April 16 Facebook post that the Essebsi will not be intervening in Nidaa Tounes affairs. His involvment would remain limited to participation to the April 6 congress, where he delivered a speech calling on the party to unify, Garrach added.

Many had bet on the Nidaa Tounes congress successfully reuniting the party ahead of upcoming elections. That the outcome was the Monastir and Hammamet congresses, however, points to new divisions and conflicts over leadership possibly portending the party’s disintegration.