As one of the top countries of origin for foreign IS recruits, Tunisia has struggled to address domestic threats of returning jihadis and how to de-radicalize these youths. 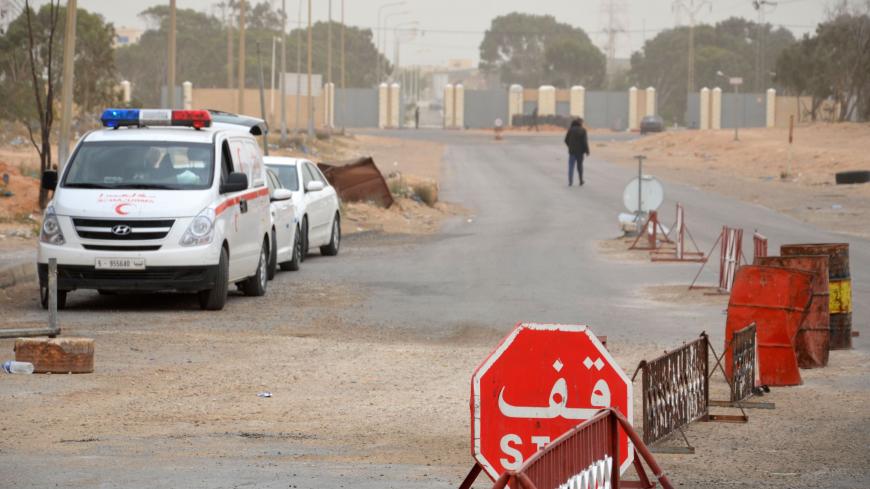 A picture taken March 22, 2016, shows vehicles waiting near the Tunisian customs post at the Ras Jedir border crossing with Libya, south of the town of Ben Guerdane, after it was reopened after a two-week closure in response to a deadly jihadi attack on a town near the border. - GETTY/Fathi Nasri

TUNIS & KASSERINE, Tunisia — When Jamel Ben Moussa, 29, joined the Islamic State (IS) at the end of 2014, he said he did so “to help the Syrian people.” The young Tunisian man had watched sleekly produced recruitment videos posted online “showing women and children being slaughtered by Syrian regime forces. I had to do something.” Moussa made his way to Libya, flew to Turkey, then crossed the border into the jihadi “caliphate” from the Turkish province of Gaziantep. He insisted that he received “no assistance” from any Turkish officials, only from smugglers and IS operatives.

The first months at a training camp in the Syrian town of al-Rai “were really exciting,” Moussa told Al-Monitor in a Skype interview from the northern Syrian town of Derik. He was given a nom de guerre: Abu Serra al-Tunisi. But he grew disillusioned as he witnessed IS’ atrocities. “They were killing the wrong people, like my friends, like civilians," he said. "I wanted to leave."

He tried to flee numerous times and finally succeeded in October, turning himself in to the Syrian Democratic Forces (SDF) in Deir ez-Zor. He is now being held at a detention facility run by the SDF, the US-led coalition’s top ally against IS, with the jihadis now on the brink of defeat. The SDF facilitated and sat in on his interview with Al-Monitor.

Moussa, who speaks good English — he learned it at school — is among thousands of Tunisians who ended up in IS. Estimates vary, and it's impossible to verify, but 3,000 to 6,000 is the range most commonly touted, making Tunisia one of the countries with the highest number of recruits per capita. SDF officials told Al-Monitor that it currently has 150 Tunisians in its custody, a figure Moussa confirmed. Most hail from the capital, Tunis, he said.

Unsurprisingly, Moussa insisted he has no blood on his hands. “For the most part I worked in a hospital in Raqqa. I gave patients medicine,” he claimed. “If I had fought I would have had battle scars, I have none.” Moussa is clean shaven, sports a magenta bandana and puffs on a cigarette. He said he regrets joining IS and that he wants to be permitted to return home to start a new life with his wife, a Swedish national, who is being held in a nearby camp for IS families, and their two infant daughters. “I am not sure what would happen to me though if I returned, do you?”

It's a question that is near impossible to answer. The subject of Tunisians who joined IS remains highly sensitive in this North African nation that has, in previous years, been rocked by a series of deadly jihadi attacks. Few ordinary Tunisians are willing to talk about the jihadis for fear of drawing the notoriously heavy-handed security services’ attention. Moussa said he learned that his mother was periodically grilled about him by the police. His brother, Saif, an English-language student at the University of Sousse, confirmed in a telephone interview with Al-Monitor that his mother, Wassila, continued to be questioned by the police. “They ask her for her Facebook password," he said. "They ask her how my brother went to Syria, who made him join IS. And she doesn’t know.” Two weeks ago she was told to travel to the capital Tunis for further grilling. “We have nothing to hide, my mother always talks to them,” Saif said, adding that he did not believe his brother had committed any act of violence and that he would be welcome back.

Sousse, a popular tourist resort, was scene to an IS attack in 2015 that left 38 dead, including 30 Britons. That same year an IS suicide bomber blew himself up near a police bus in central Tunis, killing 12 security guards, while a separate attack at the Bardo National Museum killed 22 other foreign tourists and their guides. A state of emergency has been in place ever since.

The number of attacks has sharply diminished, thanks in large measure to help from the EU, Algeria and the United States, all of which have a vested interest in containing the threat. The border with Libya, through which jihadis and weapons once flowed, is tightly monitored by US-supplied surveillance drones and is being beefed up with sand barriers and water trenches. According to Anthony Dworkin, a senior fellow at the European Council on Foreign Relations, “Tunisia stands out among North African countries for its readiness to work with international partners on reforming and improving the capability of its security sector.”

Today, patches of Tunis brim with insouciance. In tightly packed night clubs, wine and beer flow freely and couples embrace. Western tourists are beginning to trickle back. Tunisia’s vibrant civil society may be its strongest card.

AMIDEAST is a US nonprofit that recently launched a project to help build capacity among Tunisian civil society organizations and to fund projects that promote “community resilience,” in other words, to create the kind of environment where terrorism can no longer thrive. The nonprofit said the response has been overwhelming. Country Director Jennifer Smith told Al-Monitor that 250 project ideas were submitted from all 264 administrative divisions, or “delegations,” in the country within a single month. “Tunisian civil society is saying ‘we won’t wait for the government to fix our problems, we are taking matters into our hands,’ and that is very encouraging.”

In the meantime, the terrorist threat persists. The government reckons that some 600 Tunisian fighters have made their way back, with an unspecified number joining the local IS franchise Jund al-Khilafah, which the State Department designated as a global terrorist outfit in March 2018.

Yet as Aaron Zelin, the Richard Borow Fellow at the Washington Institute for Near East Policy and the author of a forthcoming book on Tunisian jihadis, noted at a recent panel, “Tunis seems to hope the problem will fix itself. The government offers no rehabilitation or reintegration for initiatives for individuals who fought in Syria — returnees are either detained in prison or free to join general society.”

If the government does have any rehabilitation schemes for former jihadis, the website of Tunisia’s National Counterterrorism Committee chooses not to advertise them. Clicking on the “projects” heading, one gets “no results.” Meanwhile, Jacob Walles, a former US ambassador to Tunisia and current senior adviser on foreign fighters in the State Department’s counterterrorism bureau, observed at the WINEP event, “The country’s overcrowded prisons continue to serve as breeding grounds for jihadists.”

Dworkin told Al-Monitor, "And when hunting down potential jihadists, the security services cast the net so wide, that innocents get caught causing further alienation and creating potential jihadi recruits."

Multiple reasons are cited as to why so many Tunisians are attracted to radicalism: a continued lack of economic opportunity; chronic unemployment, especially among university graduates; and disillusionment with the 2011 Jasmine Revolution are commonly cited.

On Oct. 29, an unemployed university graduate, 30, set off a bomb in the heart of Tunis, killing herself and wounding 26 people, mostly police officers. The woman had pledged alliance to IS, Tunisia's interior minister said.

In the province of Kasserine, home to Chaambi Mountain, where pockets of IS militants lurk, coffee shops are filled with young men smoking and playing cards. With few other alternatives, many rely on smuggling contraband from neighboring Algeria to survive. The Tunisia General Labor Union's (UGTT) representative in Kasserine, Bouazi Abdul Aziz, told Al-Monitor, "In Kasserine unemployment is double the national average. There are lots of drugs." He paused for effect and asked: "What happens next? They go to the mountains and become terrorists."

In December, Abderrazak Zorgui, 32, a struggling freelance journalist, chose a different path. He set himself ablaze in a final act of desperation in Kasserine’s main square. In a video he made before his death, Zorgui said, “For the sons of Kasserine who have no means of subsistence, today I start a revolution.”

His actions mirrored those of Mohamed Bouaziz, the street vendor whose self-immolation in the neighboring province of Sidi Bouzid sparked the protests that led to the overthrow of Tunisian dictator Zine El Abidine Ben Ali and inspired the Arab Spring in 2010.

Authorities said that Zorgui changed his mind at the last minute. The youth who allegedly lit the match has since been arrested. A surveillance camera pointed at the spot where the tragedy unfolded might have recorded the details, but the government has said nothing about it. “Instead of focusing on the conditions that led to the act of self-immolation, the focus is on who lit the match,” said Olfa Lamloum, country director for International Alert, who has conducted extensive field work in Kasserine.

The revolution has brought unprecedented freedom unseen elsewhere in the Arab world.

Recent studies suggest that the UGTT, the country’s largest labor union, has become something of a vehicle for combating radicalization by offering disaffected youths an alternative means of letting off steam. Paradoxically, the UGTT’s frequent strikes for public sector wage hikes and other reforms fly in the face of government efforts to stimulate the economy, create jobs and, ostensibly, reduce the appeal of jihadism.

The government’s failure to improve economic conditions remains the country’s top problem, concurred Naoufel Jammali, a lawmaker of the Islamist Ennahda party from Sidi Bouzid. He told Al-Monitor, "People are burning themselves in an act of hopelessness, it's kind of a yellow light.”

But the country’s secular leaders are ignoring it, blaming Ennahda even as they share power in a coalition government. Many charge that the Islamists openly abetted Islamic militancy when it came to power in 2011 in the wake of the revolution, allowing radical preachers from the Gulf to sow jihadism in the country’s mosques and egging on young Tunisians to join Sunni Arab rebels fighting to overthrow President Bashar al-Assad.

Ennahda leader Rachid Ghannouchi denied all the charges in a recent interview with Al-Monitor.

“There is a reductive narrative in Tunisia that holds Ennahda responsible for the growth of Salafism in the country,” said Lamloum.

Casting poverty and joblessness as the main sources of radicalism can also be reductive. Asked why he believed his brother, Jamel Ben Moussa, had joined IS, Saif said, “It was out of weakness of character. He was drinking every day, hanging out with girls and even taking drugs. He wasn’t looking for a job and just taking money from our mother.” The family was comfortably well off, Saif explained. But before his disappearance in August 2014, Moussa had grown a beard and began spending long hours at a local mosque. “He began lecturing us. IS brainwashes people. They are the devil,” he said.