Tunisian authorities remain tight-lipped on the tumult in neighboring Libya, even as escalating violence impacts the Tunisian border. 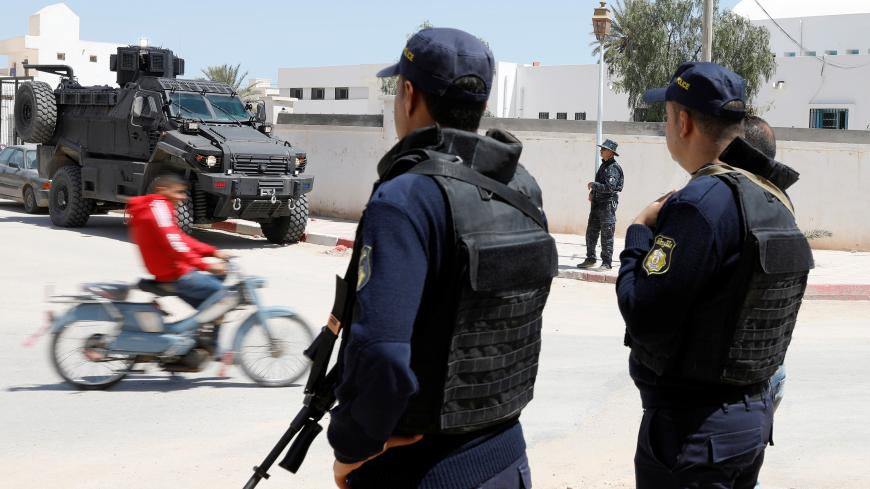 On May 5, Tunisian security services in Ben Guerdane, on the Libyan border, said they stopped a vehicle carrying a group of Libyans attempting to cross the border into Libya, seizing around 370,000 euros and $200,000 in the process.

On May 3, Tunisia’s Interior Ministry announced that “three of the most dangerous terrorists” from the Islamic State-linked Jund al-Khilafah, or Sons of the Caliphate, had been killed in Sidi Bouzid.

In late March it emerged that Tunisia had imprisoned Moncef Kartas, a UN expert on illegal Libyan weapons, in violation of international law, according to a letter signed by over 90 weapons experts and Libyan researchers, the Guardian reported.

These seemingly disconnected incidents offer some clues as to how escalating violence in Libya, where warlord Khalifa Hifter has laid siege to Tripoli, has affected Tunisia.

The cash seized in Ben Guerdane may well have been destined for one of the myriad armed factions currently at war in Libya, Western diplomats speaking on condition that they not be identified say. There is widespread speculation, but no evidence to go with it, that Kartas is being held under pressure from the United Arab Emirates. Yet it is no secret that the wealthy Gulf state backs Hifter — who also enjoys French, Egyptian and Saudi support — and it hasn't made much of an effort to hide this, so why go to such extremes?

Whatever the truth, Tunisian authorities remain singularly tight-lipped about the tumult unfolding next door, and for good reason, analysts say. “Public communication on that has been limited, quiet and cautious,” Max Gallien, a London-based expert who closely monitors the Maghreb, told Al-Monitor. “I think, given the polarized political climate [in Libya] and Tunisia’s vulnerabilities, it's a reasonable communications strategy.”

In a display of the government's cautious messaging, Mehrezia Labidi, a member of parliament for the pro-Islamic Ennahda party which shares power in Tunisia's governing coalition, told Al-Monitor, "We are not siding with one party or the other in this conflict. We invite all sides to stop fighting and to resume the quest for a political solution. Tunisia has a very long frontier with Libya. As a nation armed conflict next door is a factor of instability and insecurity for us. But it is Libyans who are doing the fighting and Libyans who are dying."

Tunisia's foreign minister, Khemaies Jhinaoui, summed up the policy in an interview with the country's official news agency TAP yesterday: "We do not want to enter into any axis. We want to be 'the refuge' and 'the voice' that gives advice to the Libyan brothers."

The sole democracy to have emerged from the Arab Spring, Tunisia has since been buffeted by jihadi violence and popular unrest fueled by rising joblessness, inflation and deeply rooted corruption. In October and November, the country will elect a new parliament and president, respectively.

Tunisia has been under a state of emergency since July 2015, after a string of deadly attacks linked to the Islamic State (IS) tore through the country.

Olfa Lamloum, country director for International Alert, a global peace-building organization, said, "It is clear that since 2011 the Arab region has entered a long cycle of revolution and counter-revolution. Tunisia, which has launched this cycle, will never be safe from its blows." The latest war in Libya "can’t bring anything positive, as we don’t build democracy with bombs."

A recent poll by the International Republican Institute revealed that 87% of Tunisians believe their country is headed in the "wrong direction." Bitter infighting within the main pro-secular bloc, Nidaa Tounes, has split the bloc into rival factions, thus increasing the likelihood that the pro-Islamic Ennahda will command even greater influence in parliament — but not if the UAE has its way, Ennahda claims.

Ennahda accuses the UAE and Saudi Arabia of meddling in the country’s affairs as part of a broader campaign to weaken Muslim Brotherhood groups across the region.

Youssef Cherif, a political scientist who has written extensively on Libya and Tunisia, said, “If Hifter wins, he will face a long-term insurgency in Libya. Several extremist groups evolving in the Sahel region will try to shake his regime.” At the same time, “Hifter will be suspicious of Tunisia if it remains a democracy, because many of his enemies will flee there and establish outposts to criticize him the way many Syrians did in Lebanon in the past.”

Cherif said that Hifter "would try to destabilize Tunisia and weaken it, as long as it allows his critics and opponents to operate.” An Ennahda-led government would be more likely to let such opponents in.

Amy Hawthorne, research director at the Project on Middle East Democracy, a Washington DC-based think tank, pointed to another big worry: “The prospect of Libyans displaced by Hifter’s campaign moving toward the border could represent a fresh burden for the Tunisian state, which has already hosted between 600,000 and a million Libyan refugees since 2011.”

The biggest risk, however, is that jihadis will exploit the situation and expand their foothold in Tunisia. Marc Pierini, a former EU ambassador to Tunisia and a visiting scholar at Carnegie Europe, told Al-Monitor, “If Hifter’s military success were to come at the price of massive violence, it could trigger a wave of [refugees] toward Tunisia, and, as seen elsewhere, jihadis could hide among them.” This would include many Tunisians who joined IS, some of whom are believed to have made their way back from Syria to Libya as their caliphate crumbled.

In a bizarre twist, Hifter, a self-styled secularist who nonetheless counts Salafis among his military allies, told France 24 this week that he often releases Tunisian IS fighters after his forces capture them. When the presenter asked him if he meant that he handed them over to the Tunisian government, he responded, “No, we just let them go.”

Sharan Grewal, a postdoctoral fellow at the Brookings Institution who studies North Africa and political Islam, agreed that Hifter’s advances in Libya “pose an immediate threat to Tunisia.” These could augur “a potential spillover of violence, an influx of refugees, even instability with regard to the informal economy,” Grewal observed in emailed comments to Al-Monitor.

Grewal was referring to the informal cross-border trade — mostly smuggling fuel and foodstuffs — that has been a critical source of income for Tunisia’s economically deprived south. This trade has been disrupted by the violence and the stricter border controls that have since been imposed.

Gallien cautioned, “In the absence of meaningful economic relief, this [disruption of trade] risks further unrest. None of these issues, from the movement of people to border security to border economies, have a quick fix — they will remain critical challenges for years to come.”

In 2016, dozens of IS operatives stormed across the border from Libya to the city of Ben Guerdane in a failed bid to take control of military bases there and murder security personnel. Around 46 jihadis and 13 members of the Tunisian security forces reportedly died in the clashes. Tunisian authorities said 22 of the slain terrorists were identified as Tunisians. The attack was thought to have been planned in Libya. Locals in Ben Guerdane were lauded for helping authorities foil the attack. Yet it is also probable that IS sympathizers in the city provided intelligence to the perpetrators.

Ben Guerdane served as a wake-up call. The United States and Europe sprung into action,  helping Tunisia insulate its borders from jihadis.

The New York Times reported in March that, according to unnamed US military officials, “the United States and Tunisia have quietly expanded and deepened their security and counterterrorism ties over the past several years, with some 150 Americans training and advising their Tunisian counterparts in one of the largest missions of its kind on the African continent.”

It remains unclear how President Donald Trump’s April 15 phone call with Hifter will affect the US counterterrorism strategy in North Africa. Trump appeared to endorse Hifter’s assault on Tripoli — a reversal of US support for the Government of National Accord that spurred an angry response from the bloc’s prime minister, Fayez al-Sarraj, in a Wall Street Journal op-ed.

The White House said in a readout that Trump recognized Hifter’s "significant role in fighting terrorism and securing Libya’s oil resources” and that the pair had discussed “a shared vision for Libya’s transition to a stable, democratic political system."

Cherif is among a large number of analysts who contest this view: “Hifter is a man whose ideal regime is a military dictatorship similar to Egypt’s. Libya and Egypt can therefore be an authoritarian bloc right by Tunisia’s borders. If Algeria does not democratize, then Tunisia will be alone sandwiched in this authoritarian ocean.”