Will Tunisia have a seat in future Libyan dialogues?

Tunisia appears to have lost an opportunity to garner international support to help it cope with the crisis in neighboring Libya when it rejected an invitation to the Berlin conference. 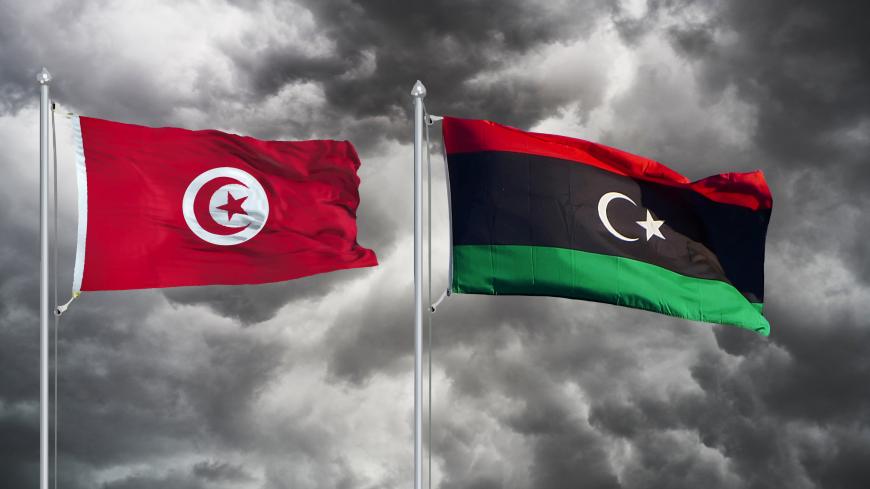 When Tunisia's president turned down the invitation to the recent Berlin conference on Libya, he scored points with the electorate. But senior Tunisian politicians have voiced the need for Tunisia to be a part of international dialogues and raised concerns about their new president’s competence on the world stage.

Tunisia’s invitation to the much-anticipated Jan. 19 Berlin conference on the crisis in Libya came very late, just two days before the conference. According to a Tunisian Foreign Ministry statement, the invitation was rejected not simply because of its late arrival, but because Tunisia did not participate in the preparatory meetings for the conference that began in September — during which time Tunisia had been occupied with presidential and legislative elections and has subsequently failed to form a new government.

By contrast, Algeria, which received its invitation just one week before the summit, did attend. Algerian President Abdelmadjid Tebboune was quoted as saying Jan. 22, “There are statements from [the head of Libya’s UN-recognized government Fayez] al-Sarraj, statements from [Libyan eastern military commander Khalifa] Hifter's side, which indicates that the only power capable of settling the problem is Algeria."

On Jan. 23, Algeria hosted foreign ministers and diplomats from Libya’s neighboring countries, including Egypt, Sudan, Mali, Niger and Chad, as well as Tunisia. German Foreign Minister Heiko Maas briefed the meeting about the results of the Berlin summit. The Algiers meeting was inconclusive beyond stating, “Libya's neighbors have the responsibility to facilitate a political solution,” discussing terrorism risks and urging the warring factions to return to the UN-led peace process.

That same day, Tunisian President Kais Saied met with Maas in Tunis. The presidential statement echoed that of his post-Berlin phone call with German Chancellor Angela Merkel, painting a contrite Germany versus an assertive Saied, who told Maas, “Tunisia should have an active role in resolving the Libyan crisis in accordance with the new approach.” Saied called for an intra-Libyan dialogue away from foreign interference.

Tunisia, which has hosted many UN talks on Libya in the past, currently holds the presidency of the Arab League and began its two-year tenure as a nonpermanent member of the UN Security Council in January. Given that Saied asked interim Foreign Minister Sabri Bachtobji to attend both the Algeria meeting and the subsequent Jan. 30 African Union Libya summit, was Tunisia right to refuse to participate in the Berlin conference?

The director of Columbia Global Centers in Tunis, Youssef Cherif, told Al-Monitor that he doesn’t think Saied’s refusal was a mistake. “The last-minute invitation was perceived as a humiliation by Tunisian public opinion and the elite, so Saied followed his voters' feelings.”

Cherif added, “The invitation sent to Tebboune changed things.” Cherif said the perceived message was that Algeria is “the important hegemon and Tunisia, the junior and second-class follower, while in fact it's in Tunisia and from Tunisia that most Libya business is conducted.”

But Mohsen Marzouq, the leader of the centrist modernist party Machrou3 Tounes who publicly criticized the president’s refusal of the invitation, told Al-Monitor, “Tunisia needed to be present there [in Berlin], not to have an impact on the meeting itself, but because you had the permanent members of the Security Council there,” and it was important to “meet world leaders and defend the position of Tunisia.”

He said that given the Libyan conflict’s impact on Tunisia, a delegation could have asked for “support on humanitarian issues” and “for support for the military purpose. But to be absent for [reasons of] dignity, I found it very naive.”

Abedhamid Jlassi, a senior member of the Shura Council of the moderate Islamist party Ennahda, was very concerned that Tunisia may be lagging behind in the international diplomatic game and that countries to the east of Libya — Egypt, the United Arab Emirates and Saudi Arabia — “are very active.”

Jlassi said, “Libya’s western neighbors, i.e., Tunisia and Algeria, although directly affected by the situation, are not as active. Our foreign policy over the past few years has come to a dead stop. The neutrality is fine, but we need to advance.”

The organization of the Berlin conference itself was politically problematic, said William Lawrence, who teaches political science and international affairs at American University in Washington. Lawrence told Al-Monitor. “It was rooted in a certain conception of power politics” and organized “without understanding the huge impact of Libya’s own immediate neighborhood on its future.”

Lawrence said Tunisia’s nonparticipation “was a lost opportunity. There’s a lot of confusion about where Kais Saied is going and what he is changing, particularly in foreign affairs, because he seems to have old-fashioned Arab nationalist proclivities — but not all the time — and any time he can spend advocating for Tunisia and his new administration of it is well spent. Tunisia’s success is critical for Libya’s success, and vice versa.”

Cherif said Saied’s apparent attempts to take a “pan-Arabist, noninterventionist approach” may not be working. “He pushes for rapprochement with Algeria and a Libyan-Libyan solution, but the reality on the ground is far more complex than idealist ideas.”

The very real impact on Tunisia’s border security was underlined recently Jan. 4 when a cache of 35 Turkish-made pump-action shotguns were discovered in the Medenine region near the Tunisian-Libyan border following a Turkish delivery of arms to Libya. The shotguns were thought to be en route to armed groups in northwestern Tunisia. The increased risk of terrorism resulting from the current Libyan conflict was one of the key issues discussed in the Algeria meeting.

Smuggling, which has increased since 2011, has impacted the Tunisian economy through lost tax revenue, but there are other negative economic impacts on Tunisia. Marzouq said, “There are many [Tunisian] clinics that are treating Libyan fighters but not being paid by the Libyan government, so there are 100 million dinars' [$35 million] worth of unpaid bills. Tunisia is losing a lot of things,” and therefore, “We need help from the international community to better deal with these types of impacts.”