Can Tunisia stay out of Libya war?

During his visit to France, Tunisia’s President Kais Saied stressed his country’s unwavering neutral position on the conflict raging in Libya, to the dismay of the country’s Islamist Ennahda movement. 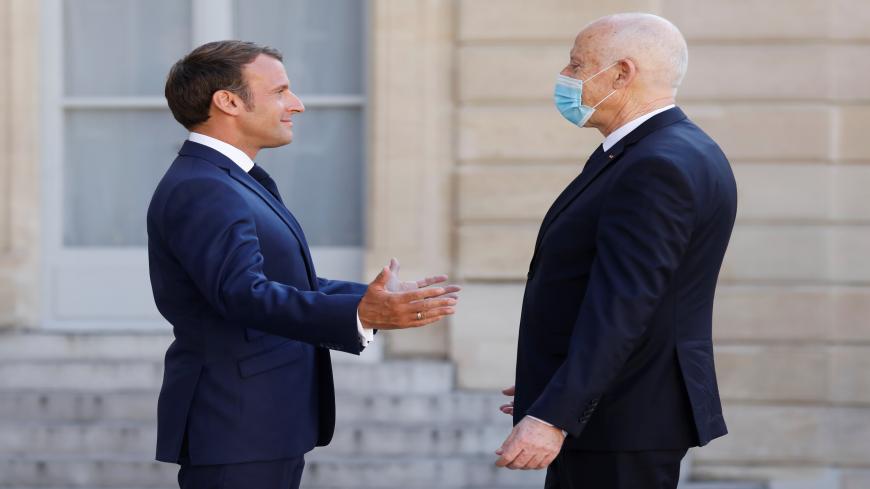 Tunisian President Kais Saied visited France June 22, in his first trip to Europe since his election in October 2019. Saied met with French President Emmanuel Macron at the Elysee Palace in Paris to discuss bilateral relations between the two countries, as well as regional developments, namely the Libyan crisis.

During a joint press conference on the sideline of his meeting with Saied, Macron condemned the “dangerous game” Turkey is playing in Libya, saying it is a direct threat to the region and Europe.

Macron called for the cessation of foreign interventions and unilateral actions of those who claim to be making new gains in the war in Libya.

Saied said that Tunisia refuses to line up behind any alliance in Libya and called for a dialogue away from the language of arms and war, saying, “The authority in Libya is based on international legitimacy.”

However, he added that this legitimate authority is temporary and should be replaced by a new one that “stems from the will of the Libyan people.”

Contrary to the expectations of many Tunisian pundits, the issue of the “French apology” was not discussed during the talks. Tunisia’s parliament rejected June 9 a motion calling on France to apologize for crimes committed during its colonial rule of the North African country. Only 77 parliamentarians voted in favor of the motion, far short of the 109 votes needed to pass.

Former Foreign Minister Ahmed Wanis told Al-Monitor that Tunisia does not wish to take any sides and that its position on Libya is clear. “Going to war will have disastrous consequences on neighboring countries,” he said, stressing that the Tunisian president’s visit to France comes at a time of tension vis-a-vis the French presence in Tunisia and the region, and France’s suspicious diplomatic moves.

Wanis noted that Tunisia is committed to remain neutral on the ongoing conflict in Libya, which has turned into a battlefield between Turkey and the forces led by the United Arab Emirates (UAE). He explained that while the Ennahda movement, which supports the UN-recognized Government of National Accord (GNA) in Libya, has reservations about Tunisia’s neutrality, the Constitutional Liberal Party (Destour) supporting eastern military strongman Khalifa Hifter, rejects any intervention in Libya.

Abdel-Jabbar al-Madouri, former editor-in-chief of Sawt al-Shaab newspaper, told Al-Monitor that Ennahda believes that Saeid’s invitation to visit France is an attempt to galvanize the president into taking action against the Islamists of the Muslim Brotherhood-inspired Ennahda. Saeid is less inclined to Tunisia’s Islamists.

Salim Basbas, a leader in Ennahda, said that his party considers that it is in Tunisia’s interest to support the GNA against Hifter’s force. He told Al-Monitor that the major powers involved in Libya seek to control the country’s wealth and riches.

Since the fall of Moammar Gadhafi's regime on Oct. 20, 2011, Libya has turned into a military quagmire in light of ongoing infighting between Hifter and the GNA forces, led by Fayez al-Sarraj.

Saied’s visit to France sparked a wave of criticism, as many political analysts saw it as a failed attempt by Ennahda supporters who are pushing for a change in the Tuninsian official stance toward supporting Turkey, which is throwing its weight behind the GNA.

Zuhair al-Maghzawi, secretary-general of the People’s Movement, which holds 15 seats in parliament out of 217, told Al-Monitor that the best solution for Libya lies in an internal Libyan dialogue and political settlement away from the language of war. He stressed that Tunisia’s security is tied to Libya’s as is the case with the rest of its neighboring countries.

Maghzawi praised Saied’s stance vis-a-vis the GNA and its ending legitimacy as articulated at the Elysee Palace, saying that it has been over four years since the Skhirat Political Agreement, which was signed between Libya’s warring parties in 2015 in Morocco under UN auspices. He said the agreement has expired and became renewable.

In a June 22 meeting between Tunisian Minister of Defense Imad al-Hizqi and Commander of US Africa Command Gen. Stephen Townsend, in the presence of the US ambassadors to Tunisia and Libya, Hizqi stressed the Tunisian official position in support of the legitimate authority in Libya and on the need to reach a political settlement.

On Jan. 19, Algeria, Egypt and Turkey, along with US and European Union leaders, took part in a conference on Libya hosted by Berlin. Noteworthy was the absence of Tunisia, which rejected the invitation of German Chancellor Angela Merkel. Saied, who spoke to the Tunisian official TV, said back then that the decision to skip the meeting was because Germany’s invitation came late.

Since the Berlin conference, Tunisia has rejected any foreign military intervention in Libya, calling for internal dialogue between the warring parties to reach a political solution. Tunisia fears that any military escalation in Libya could have negative repercussions on its situation at home.

Despite the reservations expressed by Tunisian parties about supporting Hifter or Sarraj in Libya, the Tunisian authorities believe the solution lies in an intra-Libyan dialogue. They also call on the conflicting countries in Libya to end the war and allow the Libyan people to choose their own fate away from the Turkish-Qatari axis supporting Sarraj, or the Saudi-Egyptian-Emirati axis backing Hifter — or even away from Russia and France.