A number of political leaders are calling for the formation of a national salvation government in Tunisia after several successive governments have failed to solve the economic crisis. 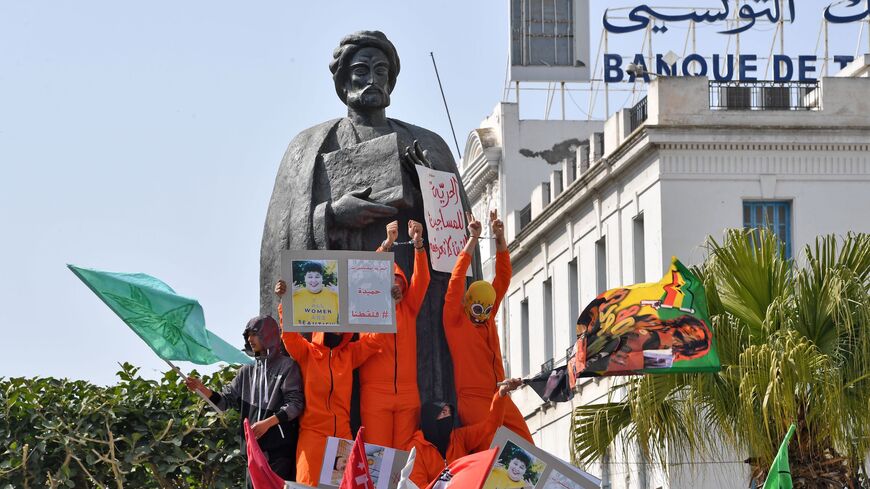 Tunisian protesters shout slogans against police forces during a protest against the government on March 6, 2021, in Tunis. - FETHI BELAID/AFP via Getty Images

TUNIS — A government of national salvation is more than necessary in Tunisia amid the disruption of political dialogue among the ruling political elite, Lotfi Mraihi, head of the People's Republican Union Party, said March 28 in Gabes, southeast Tunisia, during a media briefing organized by his party.

Tunisia's new cabinet has yet to be sworn in. A cabinet reshuffle in 11 of the 25 ministries was approved by an absolute parliamentary majority on Jan. 24 but in a first in the history of Tunisian politics, Saied refused to invite four out of the 11 newly appointed ministers to take the oath of office. The president rejected the four ministers proposed by Mechichi over suspicions of corruption and conflicts of interest.

Mraihi noted in the March 28 press briefing that Tunisia cannot afford stalling further, saying that political movements have the right to disagree, but the current level of hostility of verbal and physical violence is unacceptable.

He pointed out that Tunisia is on the verge of bankruptcy, explaining that his party has stressed for years that the country is facing economic and not political difficulties. He attributed the political failures and disputes to an inability to find solutions to economic problems.

Since Tunisia’s 2011 revolution, the country has seen several governments form and dissolve. The first was led by Mohammed Ghannouchi, then late Baji Caid Essebsi, followed by Hammadi Jebali, Ali Arrayed, Mahdi Jumaa, Habib al-Said and Youssef al-Shahid. The next government of Habib al-Jemli fell apart after not failing to achieve a confidence vote, then Ilyas al-Fakhfakh formed a government but resigned and was succeeded by Mechichi on Sept. 2, 2020.

Political bickering has stopped all of them from solving the country’s economic crisis and addressing the people’s social and developmental demands. Tunisia is still in the terrible economic crisis that erupted following the 2011 revolution. Protests and sit-ins have hindered production in a number of vital sectors across the country, while tourism revenues have significantly declined in light of terrorist attacks.

In a video posted on Facebook Feb. 26, Hamma Hammami, spokesperson for the Tunisian opposition Workers Party, said that the national dialogue with the current ruling elite would not lead to a political solution. He argued that the country can only be saved through the dissolution of parliament and the overthrow of the current regime.

On Dec. 30, 2020, Saied approved the Tunisian General Labor Union's proposal to begin a national dialogue to find solutions to the country's crisis.

However, the initiative was rejected by the Free Destourian Party (which includes the most prominent figures of the former regime of President Zine el-Abidine Ben Ali), over the inclusion of the Ennahda movement.

In 2013, a political and security crisis ravaged Tunisia, with political assassinations and terrorism claiming the lives of two leaders of the leftist opposition and a number of soldiers in Jebel el-Chaambi in the west of the country. The Tunisian National Dialogue Quartet was then formed to hold a national dialogue to contain the crisis.

Zuhair al-Maghzawi, head of the People's Movement Party and member of the parliamentary Democratic Bloc, which holds 38 seats in parliament, told Al-Monitor, “The People's Movement Party’s only condition for entering into a national dialogue is the resignation of the failed government of Mechichi, which caused this suffocating crisis in the country. The national dialogue must include economic solutions with the participation of young people.”

Rachid Ghannouchi, the parliament speaker and head of the moderate Islamist Ennahda, told Reuters March 10 that he saw no justification for changing the current government, stressing that the country needs political stability to initiate urgent economic reforms.

“The formation of a national salvation government is an acceptable idea but on the basis of continuity, not estrangement,” he said. "Therefore, we do not see a need to change the team leader and the good ministers, regardless of their affiliations.”

Fouad Thamer, a lawmaker from Tunisia's Qalb Tounes, which has 30 parliamentary seats, also rejected the idea of removing Mechichi from his position. “The resignation of the prime minister will further complicate the national dialogue and the situation in the country," he told Al-Monitor.

Thamer called on political parties in Tunisia to engage in dialogue to find solutions and avoid the language of exclusion.

Abdel-Jabbar Maddouri, the former editor of Sawt Al-Shaab newspaper, told Al-Monitor, “The accusations leveled against the Ennahda movement, which ruled the country for 10 years, of being behind the political and economic failure are pushing many political parties to boycott this dialogue.”

He added, “Ennahda rejects any fundamental amendments to the Mechichi government, while the People's Movement and the Democratic Current set these amendments as a condition for initiating the national dialogue.”