In the midst of stifling political, health and economic crises, Tunisian President Kais Saied decided to sack the prime minister and suspend parliament in a move some described as a “coup.” 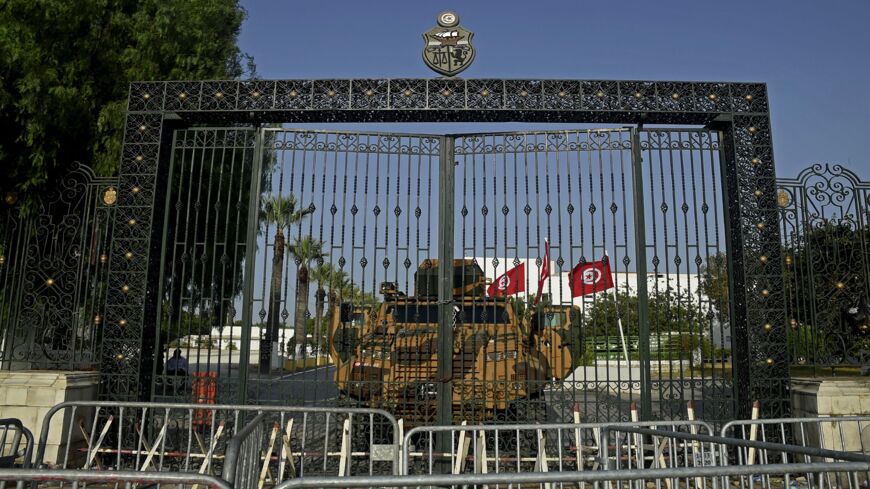 TUNIS — Tunisian President Saied Kais named a new interior minister on Thursday, less than a week after he had sacked the prime minister and dissolved the country's parliament in moves he claimed were in line with public opinion and aimed at safeguarding the country. His opponents, meanwhile, decried what they deemed a blatant power grab and "coup," and the country remains sharply divided.

Kais issued on July 29 a presidential decree appointing Ridha Garsalaoui, a former national security adviser to the presidency, to run the Interior Ministry, according to a video posted on the Tunisian presidency’s official Facebook page.

In a July 28 meeting with the head of the Tunisian Union for Industry, Trade and Handicrafts (UTICA), Samir Majoul, Saied proposed that all those involved in looting public money must finance development projects in poor regions, claiming that "460 people have stolen from the state coffers and they are required to return 13.5 billion dinars [about $4.8 billion]."

Meanwhile, spokesman for the Court of First Instance in Tunis, Mohsen Dali, announced on July 28 that an investigation had been opened into allegations that Ennahda, Qalb Tounes and the Aich Tounsi association received funds from unknown sources during their 2019 electoral campaign. In a statement to the state paper Assabah, Dali said that an investigation has also been opened into the “mismanagement of funds belonging to the Tunisian Anti-corruption Authority (INLUCC)” during Chawki Tabib’s chairmanship of the body.

On July 26, Saied sacked the country’s Defense Minister Ibrahim Bartagi and acting Justice Minister Hasna Ben Suleiman. He assigned the secretaries of the two ministries to handle administrative and financial matters until the formation of a new Cabinet.

This comes among several decisions announced by the president on July 25 following an emergency meeting at the Carthage Palace. Saied dismissed Prime Minister Hichem Mechichi, suspended parliament and lifted immunity from its members, and announced he would rule the country by decree for 30 days.

In a televised speech on July 25, Saied, who was elected with 72% of the votes in the 2019 presidential elections, said he would assume the executive power with the help of a new prime minister and he invoked Article 80 of the Tunisian Constitution with all its terms, except for the provision on informing the Constitutional Court.

He said he informed both Mechichi and parliament speaker Rachid Ghannouchi of the exceptional decisions he had taken, stressing these measures are temporary and are the result of the deepening crises in the country.

Article 80 of the Tunisian Constitution stipulates that the president of the republic has the right to take exceptional measures for 30 days in case of imminent danger threatening the homeland, security and independence of the country.

Saied’s decisions came after Tunisia witnessed sweeping protests across the country that erupted on July 25 calling for the government to step down and parliament to dissolve.

Protesters attacked the headquarters of the moderate Islamist Ennahda movement, the largest party in parliament, setting fire to its offices in several cities in the fiercest wave of protests in recent years against the movement.

Ennahda was part of almost all governments after the 2011 revolution that toppled former President Zine El Abidine Ben Ali.

In a first reaction, Ghannouchi and his deputy, Samira Chaouachi, attempted at dawn on July 26 to enter parliament’s headquarters in the heart of the Tunisian capital. Their attempt was recorded on a video broadcast by Ghannouchi on his official Facebook page. However, based on instructions by Saied, military forces surrounded the parliament building and prevented them from entering. Military armored vehicles secured the gates.

After being denied access to parliament, Ghannouchi and parliament members from different parliamentary groups staged a sit-in outside parliament headquarters. They also denounced the suspension of all the powers of the legislative institution.

On the same day, skirmishes erupted in the parliament square between Ennahda supporters, who were called upon by Ghannouchi to take to the street to defend the revolution a few hours after Saied’s decisions, and Saied’s supporters, who went out to celebrate.

The reactions of the parliamentary blocs to the president’s decisions differed. In a statement issued following an emergency meeting of its executive office on July 27, Ennahda, with 53 parliament members out of 217, called for a national dialogue to get the country out of the crises.

The movement further urged political and civil forces to intensify consultations on the latest developments in order to preserve the democratic gains achieved after the 2011 revolution. It also called for restoring, as soon as possible, the constitutional situation and the normal and legal functioning of the state’s institutions.

In a statement to Al-Monitor, Ennahda leader and former Finance Minister Salim Basbas affirmed that Ennahda chose peaceful struggle. “What happened was a coup and an attempt to abolish the republican system,” he asserted. “We will confront it with peaceful mechanisms.”

Also on July 26, a group of parties issued statements denouncing Saied’s decision to suspend parliament and sack the government. The Qalb Tounes party, with 29 parliamentary seats, described the decisions as a “blatant violation of the constitution” that will bring the country back under autocracy.

Meanwhile, the People’s Movement, with 15 parliamentary seats, praised the president’s decisions and considered they would put the revolution, from which the Ennahda movement and the entire ruling system had departed, back on the right track.

The Tunisian General Labor Union, the largest trade union group in the country, stressed in a statement issued July 26 the need to adhere to constitutional legitimacy in any measure taken at this stage to ensure respect for the constitution, safeguard the democratic path and restore stability to Tunisia.

Of note, Mechichi had pledged to hand over responsibility to anyone chosen by the president. He asserted in a statement on his Facebook page on July 26 that he would not disrupt or pose any problem that complicates the country's situation despite calls by Ennahda and Qalb Tounes to continue his duties.

In media statements, former President Moncef Marzouki echoed his fears that the president's decisions would be a decisive turning point toward despotism and a setback for the 2011 revolution and for Tunisia — the first Arab country to overthrow its dictator and the only one with a real democracy. Marzouki viewed Saied’s decisions as carrying a warning to political opponents and a coup against the constitution.

Tunisian former Foreign Minister Ahmed Wanis told Al-Monitor the Tunisian scene currently seems ambiguous, but he is optimistic the country will overcome this obstacle. Wanis called for forming a government as soon as possible to preserve the confidence of international supporters and their support for the Tunisian experience.

Also on July 26, in a statement on US Secretary of State Antony Blinken’s phone call with Saied, US State Department spokesperson Ned Price said Blinken encouraged Saied to adhere to the principles of democracy and human rights. Blinken urged him to maintain an open dialogue with all political actors and the Tunisian people.

The European Union urged on the same day the political actors in Tunisia to respect the constitution and avoid slipping into violence.

He argued that Saied’s diplomatic moves succeeded in bringing in millions of vaccines and tons of aid and medical equipment. “He knew how to benefit from the protests held in various regions on July 25 that mainly denounced Mechichi and Ennahda,” Bouaoud added.

Tunisians are awaiting Saied's next steps on how to restore the stability of state institutions and change the political system just like he proposed during his electoral campaign in 2019, amid fears of restrictions of political freedoms.