The presidential decree to revise the law of the Independent High Authority for Elections in Tunisia and change its composition is facing widespread criticism from opposition parties and organizations that accuse Tunisian President Kais Saied of granting himself wide powers that may affect the course of democracy. 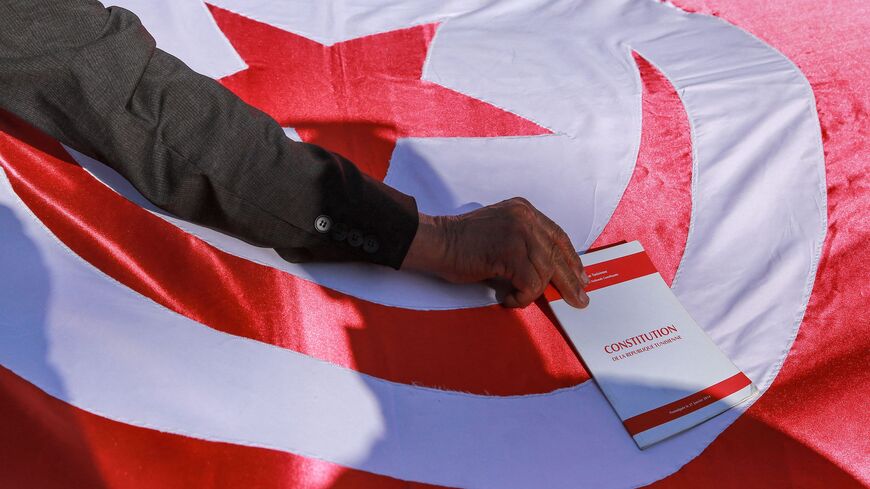 A man places a copy of the Tunisian Constitution atop a Tunisian national flag during a demonstration called for by Tunisia's Islamist-inspired Ennahdha party against President Kais Saied's recent decrees, outside the Tunis Opera House in the center of the capital Tunis on Feb. 13, 2022. - ANIS MILI/AFP via Getty Images

In a statement posted on its Facebook page on April 27, the Social Democratic Path (Al-Massar) party said that Independent High Authority for Elections (known by its French acronym, ISIE) is part of “the gains of the revolution of freedom and dignity, and its law needs to be amended in a way that enhances its independence and keeps it clear of any partisan bickering and quotas.”

The party further denounced the unilateral approach adopted by Saied in which he is implementing his personal project without involving political parties and national and civil society organizations.

Al-Massar’s statement came against the backdrop of Saied issuing a presidential decree on April 22 granting himself the power to appoint the head of the ISIE and its members before the popular referendum on constitutional amendments scheduled for July 25. According to the decree, “The ISIE Board is composed of seven members who are appointed by presidential order.”

In this context, the European Union issued a statement on April 27 noting that the “recently published decree to reform the Independent High Authority for the Elections risks reducing its independence at an important political moment and shortly before key electoral events for Tunisia.”

The EU statement added, “The independence of the high authority is a crucial element in guaranteeing the credibility of an electoral process which is intended to lead to a return to institutional normality in the country.”

On April 26, US State Department spokesperson Ned Price said in a statement carried by the US Embassy in Tunis that the United States is “deeply concerned” by Saied's decision to unilaterally restructure Tunisia’s ISIE, adding, “A genuinely independent election authority is critical given its constitutionally mandated role in Tunisia’s upcoming referendum and parliamentary elections.”

The so-called Coordination of Social Democratic Forces (which includes the Democratic Current (Attayar), the Republican Party (Al-Joumhouri) and the Democratic Bloc for Labor and Freedoms (Ettakatol), said in a statement on April 23 that the presidential decree is a sign of Tunisia’s return to the era of fraudulent elections and falsifying the will of voters.

The parties pointed out that this presidential decree unmasked Saied’s scheme to establish an authoritarian and dictatorial rule in which the people cannot exercise their sovereignty by freely choosing their representatives as required by democratic practice.

Meanwhile, ISIE head Nabil Baffoun told Shems FM on April 22 that the next elections will be conducted from the Carthage Palace (the presidential residence), and he lamented that Tunisians will bid farewell to the independence of the ISIE.

Former Tunisian President Mohamed Moncef Marzouki said in a Facebook post on April 22 that Saied, whom he described as a “coup president,” continues to dismantle all the institutions of the rule of law and the institutions brought about by the struggles of five decades that culminated in the 2011 revolution, noting that Saied is pushing Tunisia to the edge of the abyss every single day.

The Islamist Ennahda party — whose leader, Rached Ghannouchi, headed the now-dissolved parliament — expressed in a statement posted April 22 on Facebook its rejection of the presidential decree on the ISIE.

Ennahda, which had the largest bloc in the dissolved parliament, said that the decree issued by Saied reflects disdain for the Tunisian people and their revolution and further dismantles the state by taking over all authorities and sabotaging the democratic path.

For its part, the Mourakiboun network, a Tunisian election observation group, criticized in an April 25 statement also posted on social media the Tunisian president’s decision, saying, “There is no reason to change the ISIE’s composition during this period of exceptional measures, as this would harm the independence of the ISIE and the credibility of the entire electoral process, and consequently, the credibility of its results.”

In this vein, Obaid al-Briki, head of the Tunisia Forward Movement who held the position of minister of public service and governance in the government of former Prime Minister Youssef Chahed, told Al-Monitor, “Dissolving the ISIE is an important step in order to provide a transparent electoral climate away from partisan quotas,” noting that the ISIE’s composition included non-independent figures who had ties to political parties such as Ennahda and Nidaa Tounes.

Speaking to Al-Monitor, ISIE member Mohammed al-Talili al-Mansari expressed shock at the accusations leveled against the ISIE for its lack of independence, noting that “the ISIE declared that Saied had won the previous presidential elections by 73% although he was in competition with Chahed, parliament member Abdelfattah Mourou, former Minister of Defense Abdelkarim al-Zubaidi, Marzouki, former parliament members and several businessmen.”

Mansari told Al-Monitor that the election results were accepted by all parties.

Meanwhile, Saleh al-Riyahi, a member of the Chahed Observatory, which is tasked with monitoring the electoral process in Tunisia, told Al-Monitor that it is unacceptable for the executive authority (the president) to appoint or dismiss ISIE members and run for elections later, noting that this decree offends the Tunisian experience and democracy gains — the only experience that succeeded in the Arab Spring countries.

Leila al-Sharaibi, head of the ATIDE Association (a nongovernmental organization tasked with protecting democratic values, including the right to vote), told Al-Monitor that civil society was calling for a revision of the ISIE law, but not the way Saied did. “For instance, we had hoped that the head of the ISIE would be elected from among the members instead of being appointed.”