Most Tunisians sit out referendum

President Kais Saied calims victory as mandate for his reforms. 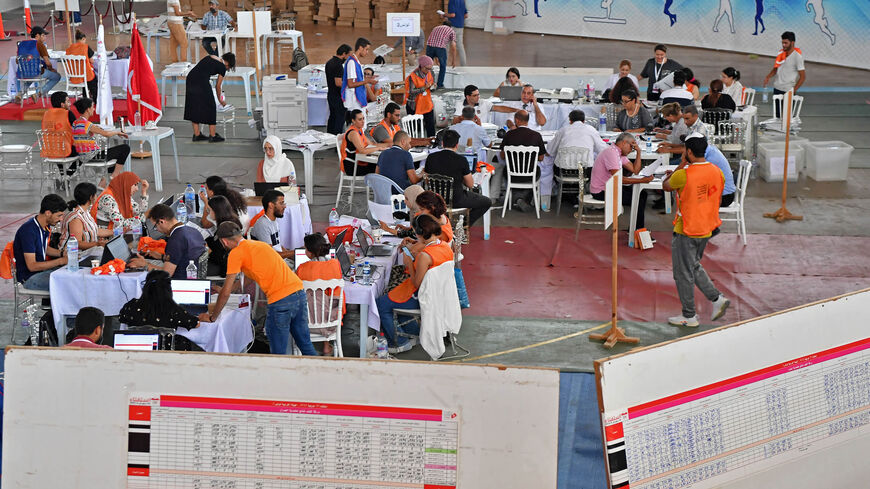 TUNIS, Tunisia — Around 2,458,985 Tunisian voters participated in the referendum on the constitution suggested by President Kais Saied. The total number of registered voters amounted to 8,929,665. Thus, only 27.54% of the registered voters participated according to records of the Independent High Authority for the Elections taken after the closing of polling stations July 24.

In a statement to Tunisian state TV following the referendum process, Director of the Sigma Konsai Foundation Hassan al-Zarkouni confirmed that preliminary estimates indicated that 92.3% voted for the draft constitution compared to 7.7% who voted against it.

Zarkouni clarified that the estimates indicate that 25% voted while 75% abstained; 21% of the 75% actively boycotted the referendum while 54% abstained for other reasons, and 23% of the total 25% of voters voted yes and 2% voted no.

Immediately after the opinion poll was published, hundreds of Saied's supporters flocked to Habib Bourguiba Avenue in the center of the capital to celebrate, chanting slogans such as, "The people want to purify the nation" and "Game over  … sovereignty to the people."

In a speech to a crowd of supporters on Habib Bourguiba Avenue, Tunisian President Kais Saied said that the first decision after the referendum is to put in place a new electoral law that changes the old form of elections in which representatives do not reflect the will of voters. He stressed that the new constitution will enter into force to uphold the republican system.

Member of the pro-president political bureau of the People's Movement Ousama Ouiedat told Al-Monitor, "Thanks to the high turnout of Tunisians, Saied won this round as well, and he defeated his opponents, the Ennahda movement, which represents the political system that ruled the country for a decade. The turnout was overall good despite the boycott of the parties that controlled the entire electoral process after Saied had won the deterministic round against the old establishment on July 25, 2021. He succeeded at the formation of a new electoral body, the dissolution of the Supreme Judicial Council, especially after the closure of parliament."

He added, “The number of people who headed to the polls reflects the success of Saied and his growing popularity despite boycott campaigns. The People’s Movement supports the [measures taken] since July 25, 2021, until this exceptional period ends and the revolution’s path that has been betrayed in the past 10 years is fixed.”

The Islamic Ennahda movement boycotted the elections. Ennahda has an important political weight and a parliamentary majority. It impacted the electoral process that followed the 2011 revolution, and it has participated in all the governments that took power since 2011.

Ennahda is part of the National Salvation Front that groups both political parties represented in the dissolved parliament and parties of the opposition, namely including the Amal Tounes movement, Al-Irada, Al-Karama coalition, Qalb Tounes, Citizens Against the Coup, and a number of other parties and movements.

This front was formed May 31 to confront the president's project as it considers it a "coup against the constitution." The National Salvation Front has worked on bringing down the referendum through protests and calls for boycott.

In its first response to the election commission's announcement, the National Salvation Front issued a statement stating that "75% of Tunisian voters refused to give their endorsement to the coup launched by the president and to legitimize his authoritarian draft constitution."

The front questioned the voter turnout figures announced by the body supervising the referendum. They asked the president to resign and instead allow the organization of early general presidential and legislative elections.

Head of the Tunisian Workers' Party Hamma Hammami told Al-Monitor that the president is working on unilaterally passing a constitution establishing an authoritarian regime. He would be the first and last ruler. Hammami considers the referendum to have failed miserably because 75% of Tunisians did not participate. The constitution would therefore be based on a minority. Hammami called on the president to resign after failing to persuade Tunisians to go to the polling stations.

Leader of Tunisia's Ennahda movement Samir Dilou told Al-Monitor that the results of the referendum reflect a process that does not comply with the conditions of legitimacy or legality. It did not respect the credibility of the voting process. He noted that the existing authority led by Saied did its best to make sure the results are in its favor. Saied has therefore significantly lost popularity.

Since June 2, these parties have decided to run a national campaign against the referendum. They boycotted and called on the people to boycott it in any way, even if they were going against it. In a joint statement published June 2, they consider all the steps taken by Saied since July 25, 2021, to be unilateral legislation aiming to end the coup with the establishment of an authoritarian regime.

The battle of the constitution had started early in Tunisia between Saied on the one hand and the Ennahda movement and its allies that oppose Saied’s plans. Amid heavy security, the 81-year-old head of the Tunisian Islamic Ennahda party Rached Ghannouchi appeared July 19 for the first time since 2011 before the investigative judge for charges of money laundering.

In front of the court house, about 200 supporters and party leaders demonstrated and chanted “Freedoms, Freedoms” and “Everything to support Ghannouchi.” They held banners saying “No to political trials” before the investigative judge decided to release Ghannouchi.

Ghannouchi’s questioning happened only a few days before Saied held the referendum on a new constitution that would greatly expand his powers in a move rejected by the Ennahda movement and other parties as illegal.

On June 23, the security units arrested former Prime Minister and leader of Ennahda Hamadi Jebali on the grounds of his suspected involvement in a money laundering case related to transfers from abroad to a charitable organization called “Namaa Tounes.” He was released June 27 while his trial continues.

The Tunisian authorities announced July 5 that the anti-terrorism judiciary had ordered the freezing of the financial balances and bank accounts of 10 individuals, including Ghannouchi, members of his family and Jebali. On June 27, the Tunisian judiciary decided to ban Ghannouchi from traveling as part of an investigation into political assassinations that occurred in 2013. This comes after Saied’s decision on July 25, 2021, to remove the prime minister and suspend the work of the parliament headed by Ghannouchi. The parliament he dissolved was controlled by Ennahda at the time with a majority of seats.