Political forces in Tunisia are divided over the upcoming legislative elections announced by President Kais Saied, with the country’s main opposition alliance announcing its boycott of the vote over the controversial measures Saied has taken since last year. 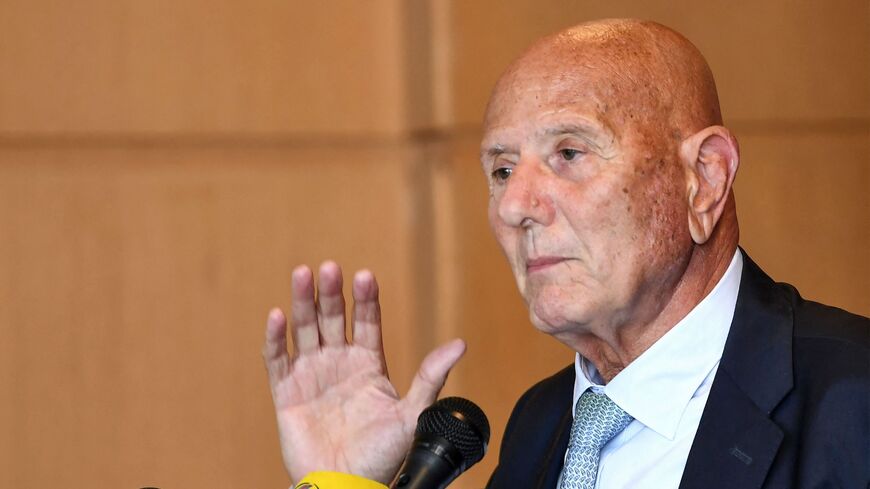 Tunisian politician Ahmed Najib Chebbi speaks during a press conference in Tunis to announce the launch of the establishment of the National Salvation Front on April 26, 2022. - FETHI BELAID/AFP via Getty Images

TUNIS, Tunisia — Tunisia’s main opposition alliance, the National Salvation Front, announced on Sept. 7 in a press conference in Tunis that its components, most notably the Ennahda party, will boycott the legislative elections scheduled for Dec. 17, which also marks the 12th anniversary of the Jasmine Revolution.

These elections are the last step of the roadmap announced by President Kais Saied last year, which he says aims to put an end to the “exceptional phase” the country is going through.

According to Saied’s roadmap, the electoral law should be issued no later than Sept. 17, with elections to be held on Dec. 17.

The National Salvation Front is a coalition of political forces that oppose Saied. It was established by Tunisian politician Ahmed Nejib Chebbi to confront the measures taken by Saied since July 25, 2021.

In statements to Al-Monitor, Chebbi, who also heads the National Salvation Front, said the front decided to boycott the upcoming elections for several reasons, including the crisis related to the electoral law that Saied is formulating unilaterally after deliberately excluding several political parties.

He added, “The elections will be held under the supervision of a body that is not neutral but rather loyal to the authority, hence the lack of transparency and independence. We expect a great deal of fraud.”

Chebbi further stressed that “the National Salvation Front refuses to engage in a coup d’etat against constitutional legitimacy,” adding that “boycotting the elections would serve as further isolation of Saied until he returns to the 2014 Constitution.”

In a related context, Ennahda Vice President and former Prime Minister Ali Laarayedh told Al-Monitor, “The movement’s decision to boycott the elections is a collective position for all the National Salvation Front components, which is better than participating in an electoral farce aimed at having the president expand his powers.”

Laarayedh ruled out that the parliament that will emerge from the upcoming elections would be serving as a source of legislation and said that it would only serve to ratify the president’s legislation.

“President Saied wants to implement his coup plot despite all parties’ opposition to his political project,” he said.

For her part, head of the opposition Free Destourian Party Abir Moussa said during a Sept. 7 press conference in Tunis that “the issuance of an electoral law only 10 days before [holding the legislative elections] in December is in violation of international standards and the code of good electoral conduct prepared by the electoral Venice Commission at the request of the Parliamentary Assembly of the Council of Europe, which has signed, with Tunisia, several agreements and programs to support democracy and human rights and guarantee the supremacy of law.”

She added, “In the event of Saied’s lack of respect for international conventions, the Tunisian Free Destourian Party will refrain from taking part in the legislative elections, as this would be tantamount to a state crime.”

In a meeting held Sept. 6 with the head of Tunisia’s Independent High Authority for Elections, Farouk Bouaskar, Saied said that a new draft text of the electoral law would be drawn up.

Jilani Hammami, a leader of the Workers’ Party, told Al-Monitor that his party will not participate in pro forma elections that are tailored to the interest of the Tunisian president who has monopolized the executive and legislative powers since July 25, 2021.

Hammami added, “The Tunisian Workers’ Party was the first to deem what Saied did on July 25, (2021), as a coup and an insult to constitutional legitimacy, unlike many parties that tried to sympathize with Saied, like the Islamic Ennahda movement, which called on Saied to respect Chapter 80 [of the Constitution], before changing its position.”

Hammami believes that the position of the Workers’ Party is stable and its positions will not change with respect to Saied, whom he says seeks to establish an individual rule.

On the other hand, the pro-Saied Echaab (People's) Movement said in a press statement on Sept. 3 that “this particular election (in reference to the upcoming legislative elections) is a national and historical responsibility that cannot be abandoned and should not fall prey to individual wills, no matter how sincere the intentions.”

Abderrazak Oweidat, head of the National Council of the Echaab Movement, said in a statement to the local FM radio station Mosaique on Sept. 3 that the movement has stressed the need to formulate an electoral law that promotes participation.

He added that the movement is determined to participate in the upcoming elections.

For his part, political analyst Muhammad Thweib told Al-Monitor that the National Salvation Front’s position on boycotting the elections is useless. He gave as an example the front’s boycott of the referendum on constitutional amendments held in late July, saying that despite this position, Saied passed the referendum law.

On July 25, Tunisia organized a referendum on a new constitution that won the approval of more than 94% of voters — although there was a low voter turnout. The referendum was boycotted by the National Salvation Front, the Workers' Party, the Democratic Current and the Free Destourian Party.

Thweib believes that Saied will hold the upcoming elections regardless of who takes part and indicated that the president’s roadmap is supported by a large number of independent parties and figures, as well as by many foreign powers and countries — except for the United States. So the boycott of the legislative elections would be meaningless and useless.

Among the most prominent parties that support Saied’s electoral roadmap are the Echaab Movement, the Tunisian Popular Current (Tayyar Chaabi), the Tunisia Forward Movement and the Democratic Patriots' Unified Party.

This roadmap is meanwhile rejected by the National Salvation Front forces and the Free Destourian Party. The Democratic Forum for Labor and Liberties (Ettakatol), the Workers’ Party, the Democratic Current and the Democratic Modernist Pole are expected to announce the same position and boycott the elections.