A dull atmosphere shrouds Tunisia’s legislative elections slated for Dec. 17 amidst a boycott announced by many political parties to protest President Kais Saied. 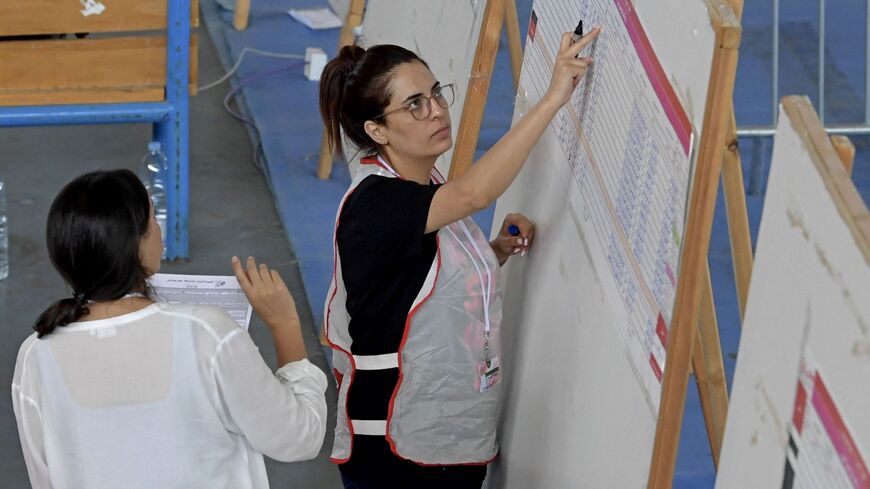 Tunisian electoral officials count votes following a referendum on a new constitution, in the capital Tunis on July 26, 2022. - FETHI BELAID/AFP via Getty Images

TUNIS, Tunisia — The electoral campaign in Tunisia has kicked off in a dull atmosphere, with many political parties announcing their boycott of the upcoming legislative elections. Unlike previous rounds, banners, slogans, and photos of candidates are not draping the sides of buildings or cluttering the streets this year.

The campaign, which was launched Nov. 25, is to continue until Dec. 15. Voters will head to the polls on Dec. 17, according to the schedule set by the Independent High Authority for Elections.

Election spokesman Mohamed Tlili Mnasri told Al-Monitor that 1,100 agents from the authority have been assigned to observe the candidates’ activities, or seven for each electoral district. Parliament now has 161 electoral districts instead of the previous 217.

On Sept. 15, Tunisian President Kais Saied issued amendments to the 2014 electoral law. The new law allows voters to choose candidates individually instead of selecting a single party list. It also allows the impeachment of a lawmaker by a decision of 10 constituents to withdraw their confidence.

Mnsari expects campaigning to pick up soon, and called the boycotts "a political stance that falls within the framework of freedom of expression.” Only three out of 10 overseas electoral constituencies have registered candidates, he said — two in France and one in Italy. In other constituencies, where candidates failed to collect the required 400 endorsements from registered voters, partial elections will be held after the formation of the new parliament.

These early legislative elections are one of the exceptional measures taken by President Saied since July 2021, including dissolving parliament and the Supreme Judicial Council, issuing new legislation by presidential decrees, and approving a new constitution through a referendum on July 25.

The 12 parties boycotting are Ennahda Movement (which had the majority in the dissolved parliament), Heart of Tunisia, the Dignity Coalition, the Movement Party (al-Irada), Al-Amal Party, the Republican Party, the Workers Party, the Democratic Modernist Pole, the Democratic Current, Ettakatol party, the Free Destourian Party and Afek Tounes.

Ahmed Nejib Chebbi, head of the National Salvation Front — a coalition of boycotting parties — lamented the state of popular frustration and the lack of any oversight powers by the next parliament over the executive branch.

Speaking to Al-Monitor, Chebbi decried Saied's road map as a failure. “There is a general feeling among many Tunisians today that there is no point in going to the polls.”

However, Oussama Aouidat, a leader of Echaab Movement, told Al-Monitor that his party will participate in the upcoming elections, with 120 candidates out of 161, or approximately 75% of the constituencies. “Our participation in these elections consecrates the gains of July 25 [2021] aimed to achieve social justice,” he said.

Abdel-Jabbar al-Madouri, a political analyst and former editor of Echaab newspaper, told Al-Monitor that the boycotting parties, if they participated "with great propaganda machines, would generate mass momentum.”

Madouri noted that another problem is the  electoral law, which stipulates that each candidate must obtain 400 endorsements. “This is in addition to the withdrawal of public funding that also led to a reduced number of candidates, to the extent that some constituencies had zero candidates and others had only one. ... These elections are expected to witness unprecedented electoral abstention and a very low turnout.”

The social situation in Tunisia does not seem to encourage turnout. The general population is preoccupied with the high cost of living and the unemployment rate stands at 15.3%, according to the latest figures issued by the National Institute of Statistics.

Female candidates account for only 12% of the total, Madouri noted, mainly due to the new electoral law that removed the gender-parity principle.