The Islamic Ennahda movement is facing a wave of resignations that are depriving it of its historical leadership and popular base after being the country’s ruling party since 2011. 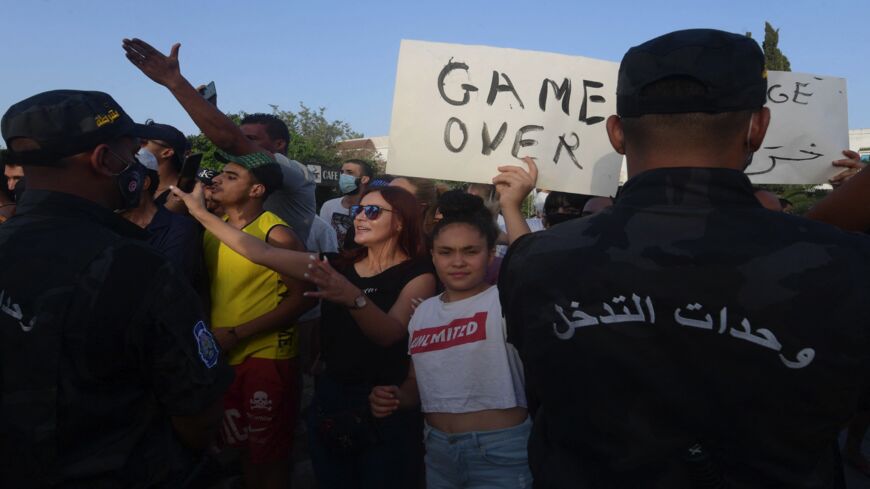 Supporters of Tunisian President Kais Saied chant slogans denouncing assembly (parliament) speaker and Islamist Ennahda party leader Rached Ghannouchi in front of the parliament, which was cordoned off in the capital, Tunis, on July 26, 2021, following a move by the president to suspend the country's parliament and dismiss the prime minister. - FETHI BELAID/AFP via Getty Images

TUNIS — During the Oct. 3 protests in support of Tunisian President Kais Saied in the coastal Monastir province in northeastern Tunisia, a group of people threw into the sea a coffin they said contained the body of the Islamic Ennahda movement in a symbolic move expressing the death of the movement and its political demise.

Thousands of Tunisians took to the streets in various provinces of the country in the first days of October to support Saied’s recent measures, including sacking the government and suspending parliament.

Among many demands, protesters called for the dissolution of the parliament controlled by Ennahda and to hold accountable the movement that has been participating in the rule for the past 10 years and has failed at all levels.

In addition to the growing popular discontent, Ennahda has also been dealt a heavy blow amid unprecedented divisions recently. On Sept. 25, 113 leaders and prominent members of the movement announced in a statement their resignation in protest against the leadership’s performance (in reference to Rachid Ghannouchi, head of the movement since its official establishment in 1981, before it was recognized by the authorities after the 2011 revolution).

Those who resigned from the movement said their decision came in response to the “wrong political choices of Ennahda’s leadership.”

The officials added in their statement that these choices have “isolated it (the movement) and prevented it from actively engaging in any common front to resist the imminent tyrannical danger represented by the Sept. 22 decisions,” in reference to Saied’s announcement that he will rule by decree for two months, ignoring parts of the Tunisian Constitution.

Those who resigned included first-class Ennahda leaders such as Abdel Latif al-Makki, Samir Dilo and Muhammad bin Salem, and a number of parliament members, as well as members of the National Constituent Assembly (formerly the parliament) and several members of the Central Shura Council, the regional shura councils as well as local offices.

Ennahda parliament member Salim Basbas told Al-Monitor the resignations deeply affect the movement since they are numerous and weighty and given that they include important leaders. He noted this wave of resignations weakens the movement, which already faces internal divisions.

Basbas said Ennahda has been dealt a heavy blow from within due to the resignations and also an external blow due to Saied’s decisions.

He called on the movement’s leadership to remedy the reasons for the resignations before the movement slips into a turn from which it cannot recover.

Al-Monitor attempted to contact some of the members who resigned; some did not respond to our calls, while others refused to make any statement to the media in light of the political turmoil in the country.

Makki, who was a former health minister, said in an interview with Mosaique private radio on Sept. 26 that the resignations came after the failure of all internal reform attempts. He said it is the duty of the leader of the movement — in reference to Ghannouchi — to resign and make room for new leadership to reassure the Tunisian people.

Meanwhile, Ghannouchi said in an interview with Al-Jazeera.net on Sept. 28 that the resignations will affect the movement and its cohesion, adding, “Those concerned were quick to announce the resignation, although there was room for dialogue to reach compromises … but to each their own.”

Abid Briki, secretary-general of the Mouvement Tunisie En Avant (“Tunisia Forward”), told Al-Monitor the resignations reflect the end of political Islam in the Arab world due to the failure of its political choices and its lack of any political or economic program.

Briki said the Islamic Ennahda movement’s political journey in the country has ended, especially after it was accused of being behind the assassinations of secular opposition leaders Chokri Belaid and Mohamed Brahmi in 2013 and of fueling the unprecedented increase in terrorist attacks during its 10-year rule.

Ennahda has faced a major crisis since Saied sacked the government and suspended parliament on July 25 in response to protests against the leadership’s performance in the past years.

Bassel Turjuman, a journalist and political analyst, told Al-Monitor Ennahda lost much of its legitimacy and a significant number of its popular base. Its alliance with parties accused of corruption cases (such as the Heart of Tunisia party) also made it lose credibility with its base, who were convinced the movement would embody the ethics of Islam with its religious authority.

On July 31, a group of Ennahda youth called on the movement’s current leadership to bear responsibility for the failure to achieve the demands of the Tunisian people and to acknowledge the state of tension and anger given the ineffectiveness of the party’s political, economic and social choices, and the way it managed alliances and political crises.

Political analyst Abdel-Jabbar al-Madouri told Al-Monitor the internal disputes within Ennahda and the numerous resignations stemmed from many reasons, including Ghannouchi's decision on Aug. 23 to dissolve the executive office and then form a new office following Saied’s power grab.

The reasons, Madouri continued, also include the decision to freeze the membership of one of the movement’s leaders, Imad al-Hamami, and to refer him to the internal System Committee on Sept. 1, not to mention Ghannouchi’s long rule of the movement. This made leaders in the first ranks choose to resign instead of clashing with him (Ghannouchi), as he continued his single-handed management approach, Madouri explained. 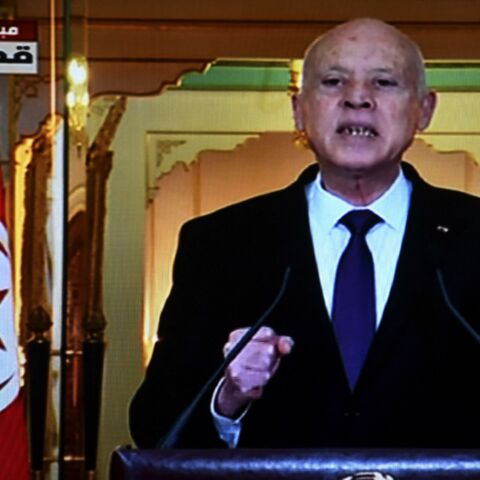 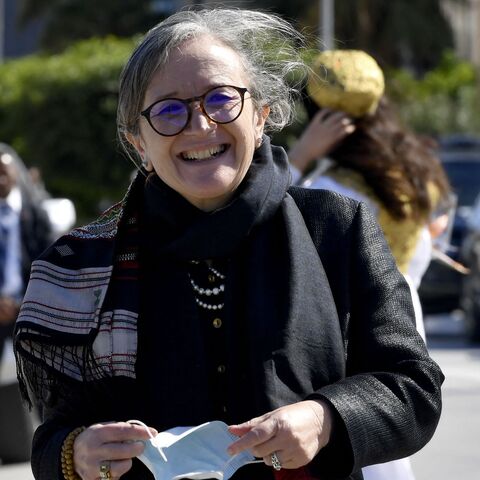 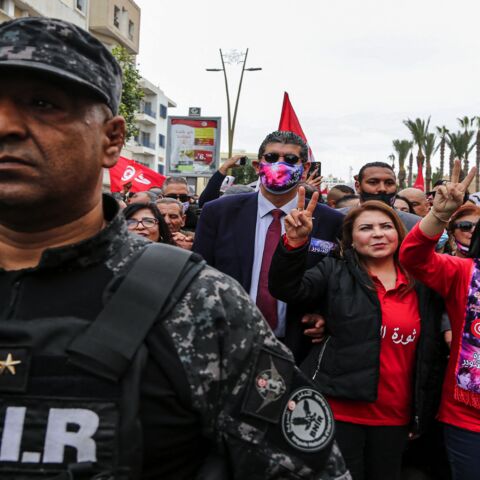